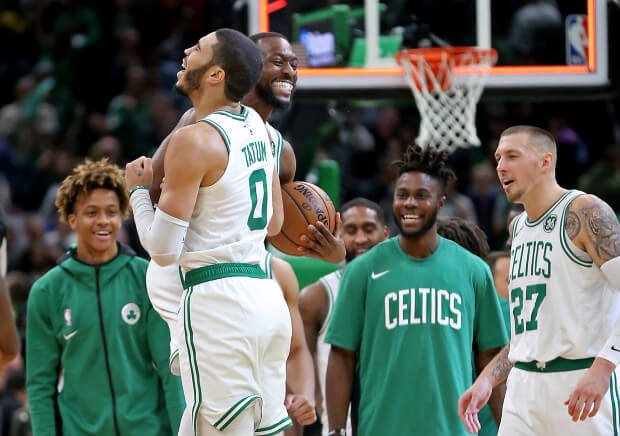 Before Friday night’s win against the Knicks, Brad Stevens entered the Celtics’ brand new press conference room at TD Garden and was asked to assess his team’s performance under its four-game microscope, prior to tip-off.

“I don’t know,” Stevens pondered for a few seconds. “It’s just four games in. You know, the last two games I thought we played 24 really good minutes in each game. You’re never going to play a perfect 48 but we got to play better across the whole game to have success. We were fortunate enough to be really good in our last couple of late-game scenarios but we have a lot of room to improve.”

That fortune blessed the Celtics, yet again, in the form of a game-clinching jumpshot from Jayson Tatum that gave the Celtics their fourth win of the season. Since its season-opening flop in Philly, Boston (4-1) hasn’t lost a game.

Tatum’s shooting percentage shoots up to 52.2 percent after halftime, including a 68.8 percent touch from behind the arc. These two have been getting it done in the second half but the front end has been ugly, to say the least.

Ugly as in the bottom of the league awful, the Celtics are last in first-half field goal percentage (36.1) and second-to-last in points per game (47).

“I have to be better at just setting the tone, especially as one of the leaders of the team,” Walker said at Celtics’ practice Monday. “I’ve just got to find a way to get my guys ready to start the game early on, even me. It starts with me a lot. I have to have better starts as well.”

Injuries certainly haven’t made things easier. Without big man Enes Kanter (knee) and Jaylen Brown (illness) Boston’s shortcomings in the opening frames were magnified in each of its last two wins but the Celtics’ effort of the defensive end is also a big reason why Boston was able to squeeze out back-to-back victories.

The Celtics are currently fifth in fewest points allowed (103). Stevens has to be thrilled to see stifling defense is keeping his team in games or erasing a 19-point deficit, which was the case Wednesday night against the Bucks. From the start, the Celtics had no business winning that game until it buckled down on Giannis Antetokounmpo and his supporting cast in the latter frames of the contest before Boston’s newest scoring duo caught fire and closed things out.

Still, as the Celtics kick off their first three-game road trip of the season, Stevens knows there’s a lot to take in about his team through five games but also, plenty more to learn from such a short sample size.

“I just think we have to improve a lot,” Stevens said. “After taking a couple of days, really watching to see where we are, we’ve got a lot of good things going. Guys are doing a great job of staying together and finding ways (to do that). But we have to get a lot better to be where we want to be, which I think is important. You know, you look across the league and the five-game starts don’t really matter.

“How good you are evens itself out at the end, you’re either on the good end or the bad end of those starts so we just have to focus on getting better.”

Boston’s second unit could use a lift. Stevens is hoping Enes Kanter, who is considered questionable for Tuesday night’s game against the Cavs, will help, while Jaylen Brown (illness) did not make the trip to Cleveland and is still considered day-to-day.

In the meantime, Stevens will continue to lean heavily on Grant Williams, Semi Ojeleye and Brad Wanamaker to anchor the second unit. It isn’t ideal nor is it expected to be the norm moving forward but in November it’s difficult to pinpoint which characteristics of a young team will survive the course of an 82-game season and which ones will fizzle out.

Recent late-game execution by the tandem of Walker and Tatum foreshadow electric fourth quarters all year long but how often will it translate into wins? Will slow starts become a pattern and even at full strength how deep is Stevens’ bench going to be?

It’s too soon to tell. For now, Stevens is laying down the foundation. He has the ingredients he needs to form a tough, intelligent and successful team, and time is on his side to fill in the blanks as the season grows.