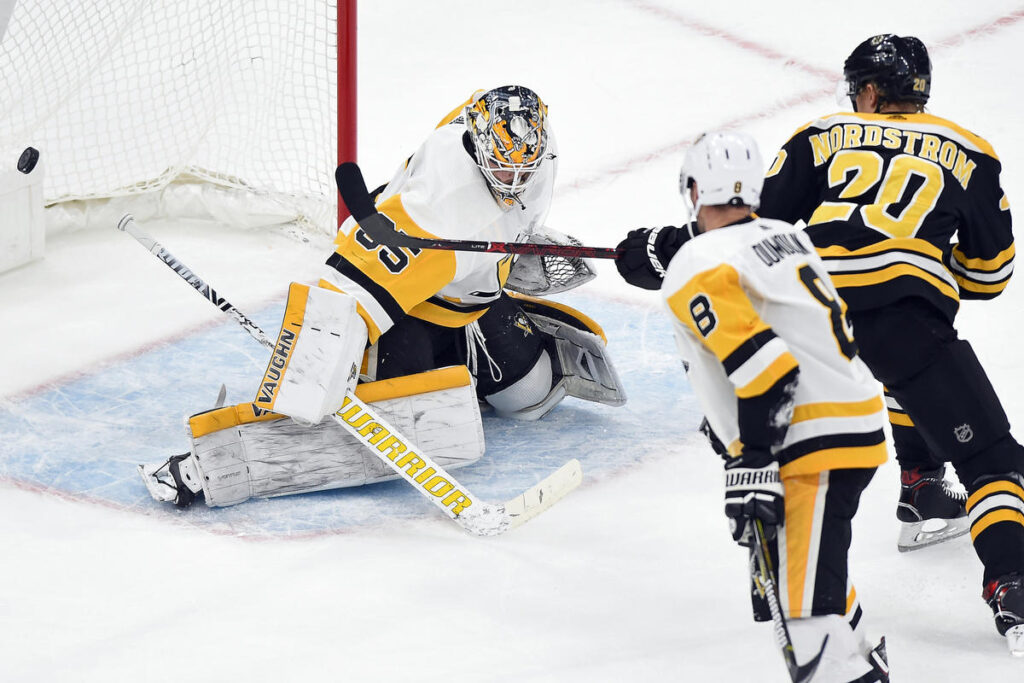 BOSTON, MA - NOVEMBER 23: Joakim Nordstrom #20 of the Boston Bruins follows the shot past Tristan Jarry #35 of the Pittsburgh Penguins as the Bruins win 2-1 in overtime of their NHL hockey game at TD Garden in Boston, Massachusetts on November 23, 2018. Brian Dumoulin #8 of the Pittsburgh Penguins looks on. (Staff Photo By Christopher Evans/Boston Herald)
Share
Facebook Twitter Email

BOSTON, MA — Hopefully you were home from Black Friday shopping by the time this game started. It wasn’t pretty, but if you like gritty, defensive minded hockey the Boston Bruins and Pittsburgh Penguins had a fabulous game that was right up your alley.

It took extra time, but in OT, Joakim Nordstrom deflected home the game winner and the Bruins snagged two points against a surprisingly mediocre Pens team.

Joakim Nordstrom wins it in OT for #NHLBruins! pic.twitter.com/Gh7ZOrqOqf

The Heinen-Krejci-DeBrusk Line Led the Way

This was indisputable and B’s Head Coach Bruce Cassidy even said it after the game.

Even though Jakob Forsbacka-Karlsson was listed as the number one center, David Krejci more than assumed that role Friday night setting up up Jake DeBrusk’s one-time goal.

Jake DeBrusk with a ROCKET to tie the game!

Danton Heinen was consistently winning puck battles and DeBrusk was constantly rushing the puck into the offensive zone. DeBrusk now has six goals in his last eight games and has more and more looked like the key to permanent secondary scoring.

🎥POSTGAME SCRUM🎥#NHLBruins Jake DeBrusk talks about how great his line with David Krejci and Danton Heinen was against #LetsGoPens pic.twitter.com/NXWO0hCdvV

Not to bore you with stats, but according to Natural Stat Trick, Heinen, DeBrusk and Krejci all ranked within the top-5 in Corsi-For%.

Miller is far from the most exciting player on the ice, but he gets the job done. Minus the delay-of-game penalty at the end of the third period he was the Bruins’ best blueliner.

Miller had the most time-on-ice on the B’s with 27:01 — almost half the game and this was only his second game back since injury.

With the Bruins crushed by injuries they’re going to be relying on these gritty 2-1-type wins if they’d still like to be within playoff-range when Patrice Bergeron and Zdeno Chara come back. That will mean great, hard-nosed defense.

Which is just what Kevan Miller brings to the ice every night.

🎥POSTGAME SCRUM🎥#NHLBruins David Backes on his controversial no-goal and his inability to score right now pic.twitter.com/CMTQR2x9AM

Halak was nails Friday night. Aside from a power play snipe from all-world Evgeni Malkin Halak was the reason the Bruins won this game.

In the last 1:20 of the second period, the Penguins could’ve scored multiple times. With 1:03 left Jake Guentzel had a whole part of the net open until Halak’s glove popped out of nowhere. Guentzel’s woes continued less than a minute later when he was left alone in front of the net with the puck. But Halak stayed square and made three straight huge saves at the top of crease.

GLOVE SAVE AND A BEAUTY FROM JAROSLAV HALAK pic.twitter.com/L6nTtv7FQs

Jaroslav Halak saves the #NHLBruins at the end of the period pic.twitter.com/Oom0hZEWLz

Halak’s most important save of the night came with just minutes remaining in the third on the penalty kill when he reached out and robbed Sidney Crosby.

Halak’s success is becoming more and more normal. Tuukka Rask is also getting back to the top of his game despite what you may see in some circles of Bruins Twitter.

Being able to rely on these two netminders as the injury bug becomes more and more contagious in the B’s dressing room will be essential to staying afloat in the Atlantic Division.

Now on to Montreal.