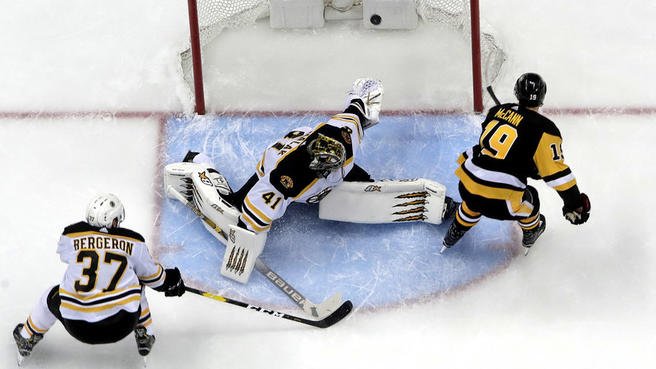 It had to end at some point, right?

Sunday night just felt like the time it would happen, and that it did. The Boston Bruins fell to the Pittsburgh Penguins 4-2 and you can’t really fault them: it was the second night of a back-to-back, on the road, with a 20-game point streak on the line, against a Penguins team finding its footing.

And Lee Stempniak was on the second line.

The 19-game point streak wasn’t quite Moneyball, but it was still rather eye-opening. The Bruins seemed to go from an inconsistent, fringe playoff team to one poised to make a deep run.

Here are the biggest takeaways.

The biggest knock on the Bruins prior to the streak was the only scoring came from Patrice Bergeron, Brad Marchand, David Pastrnak and if there was a full moon, David Krejci.

During the streak, that became far from the norm.

Marchand and Bergeron still led the team in points post-All Star break with 24 and 19, respectively. But Krejci ramped up his play, amassing 19 points in 17 games and completely anchoring the second line. Jake DeBrusk went from being called out by his coach to scoring 8 goals in 10 games from February 12th to March 5th.

Danton Heinen, who had 13 points in 48 games before the streak, had 13 points in his 15 games during it. Charlie McAvoy became the offensive defenseman the Bruins were waiting on and Chris Wagner couldn’t stop scoring.

Even more impressive was that the Bruins did this without David Pastrnak since February 10th. Without him, the Bruins went 11-0-1 during the bulk of the streak.

IMPORTANCE OF A BYE WEEK

I think it’s worth noting that the Bruins did all of this since the bye week.

Patrice Bergeron came under some heat for saying he didn’t want to be ushered into the All Star game with the fan vote because he wanted the rest.

Now we see his reasoning.

Over the course of the 19 games, the Bruins look rested and ready every night. There weren’t any throwaway games or scheduled losses.

Towards the end, it almost became a foregone conclusion that when they were down late, they’d come back (see last games against the Carolina Hurricanes, Florida Panthers and Ottawa Senators).

All of that goes back to being rested from a perfectly timed bye week.

BOTH GOALIES WERE HOT

The story of the first half was Tuukka Rask’s brutal struggles and Jaroslav Halak’s rise to the starter’s role. Once the Winter Classic came and went, the roles reversed and Rask began his journey up while Halak took the trek back down.

For head coach Bruce Cassidy, he’s going to need Halak to be on his game for the rest of this season in order to give Rask his necessary amount of rest. Rask recently told Joe McDonald of the Athletic that he’s perfectly okay with playing less to preserve himself for the playoffs.

That should be music to the Bruins’ ears. Even more music? Both goalies were elite during this streak.

NO PROGRESS WAS MADE IN THE STANDINGS

The Bruins 19-game point streak was the second-longest in franchise history. Everyone remembers the 1940-41 Bruins who set the record at 23 games.

But what’s even more insane is that this years team’s streak didn’t really make a difference in the standings.

The Bruins only sit four points in front of the Toronto Maple Leafs and 15 behind the Tampa Bay Lightning. Since the start of the Bruins streak, the Lightning went 15-3-2 and the Leafs went 12-4-3.

All that talent in one division. It’s a shame that one of those teams will be out after the first round of the playoffs by default.

Where Do the Bruins Go From Here?