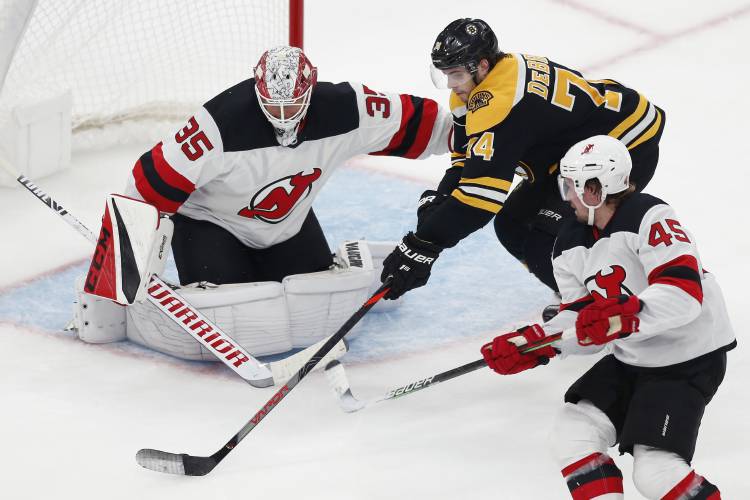 BOSTON — This Boston Bruins game had a very different outcome than their last meaningful battle at TD Garden.

The Bruins disposed of the New Jersey Devils 3-0 in their home-opener, improving to 4-1-0 on the season.

Not too bad for a team that was projected by many to start slow.

From the play in net, to the play of the Bruins’ top offensive guns, to the penalty kill, a lot of things stood out in the B’s first home win of the season.

As lopsided as the score may seem, the Devils were the much better team in the second period. They outshot the B’s 16-9 in the frame and applied constant pressure.

The Devils consistently made chances out of the B’s sloppiness in their own end.

But there was Tuukka Rask to bail out his squad.

“We had some moments where we could’ve been better,” said Bruce Cassidy. “We’re still working on our game like every other team and that’s where Tuukka [Rask] really stepped up and that’s when he should get the credit. In a game like this, I thought that’s when he earned his paycheck tonight, was, we broke down a lot there.”

There weren’t a ton of highlight-reel saves for No. 40, but his consistency and rebound control in between the pipes was of note.

Rask finished with the 31-save shutout.

Remember when Rask had to be carried off the ice at the end of the game in Vegas? Well, Rask was clearly hydrated and there was no such thing at the conclusion of Saturday night’s game.

The Marchand-Bergeron-Pastrnak Line Set the Tempo

This line was knocked down a few pegs during last year’s Stanley Cup Final when they were outplayed by the St. Louis Blues. Through the first four games of the 2019-20 campaign, the “perfection line” has been a main catalyst for the Bruins’ offensive game.

On Saturday night, they were elite.

“Yeah, I think the first couple [games] were a little sloppy,” said Brad Marchand of the team’s performance through five games. “But we’re starting to figure it out a little bit right now and kind of get back in sync. A little bit of a different training camp — a different feel. We all didn’t play as many games as we normally do so there’s going to be a little bit of rust there. But yeah, I think we’re feeling good now. It helps when you win and luckily we’ve been able to do that a bit.”

Marchand recorded the game’s opening goal and then assisted on Patrice Bergeron’s power play lamp-lighter to make it 3-0 in the second period.

Boston’s top line started the game and set the tone right from the drop of the puck, pinning the Devils in their own zone for much of the first two minutes. That would be how most of the opening 20 minutes of the game would play out and that’s when the Bruins scored two of their goals.

Brad Marchand Had a Complete Game

Marchand eluded to something unique when asked after the win what steps he’s looking to take with his offensive game.

“Not really concerned with my offensive game,” said Marchand. “It’s more about trying to be a better detail player. I think that’s something I can improve on from last year.”

Those little details proved to be huge in Saturday night’s win for the Bruins. Marchand didn’t just make a large impact on the scoresheet — his presence was felt most on the penalty kill.

It’s common knowledge that Marchand has the most shorthanded goals in Bruins history with 26, so he’s not a rookie to being a man down.

However, the way in which he handled the puck while a man down was most impressive.

There were multiple instances, especially during the second period, when Marchand made it look as if the Bruins were on a power play while shorthanded. He controlled the puck in the corners, weaved in and out of Devils players and killed time.

Marchand’s spectacular two-way game helped cause the Devils to go 0-for-4 on the power play.

And for what’s running through his mind when he has the puck shorthanded?

David Pastrnak facepalmed after missing this one pic.twitter.com/YEOp8pNA4c