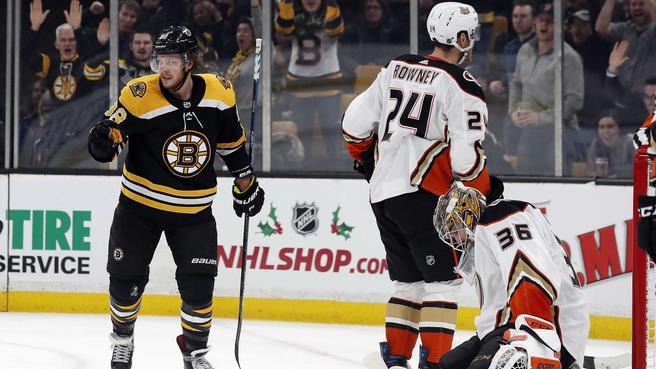 BOSTON, MA — Well, folks, our long, local nightmare is over: the Boston Bruins beat the Anaheim Ducks for the first time in five years. You can finally get a good night’s sleep.

In all seriousness, the Bruins’ 3-1 win over the Ducks did mean a lot. The B’s are now winners of two straight, as they head into a back-to-back with the Nashville Predators and Carolina Hurricanes. Because Patrice Bergeron and Zdeno Chara seem close to returning and the B’s are back to their winning ways, the tide seems to be turning in their favor.

Heading into Thursday night, the Ducks had won nine of their last 11 games so the Bruins had a legitimate test they passed.

David Krejci is thriving on the first line

Don’t look now, but David Krejci had another great night on Thursday. He notched a third period rocket of a goal to make it 3-0 and put the game away. That goal was his 600th career point.

David Krejci has been on fire as he continues his 8 game point streak and gets his 600th career point! #NHLBruins– 3#LetsGoDucks– 0 pic.twitter.com/FH3lx2jRRW

Since being moved to the first line, Krejci has five goals and 11 assists. His play has been impressive of late and it’s looking more and more like he’s playing to the level of the $7.25 million he’s bringing in this year.

He’s even making the guys around him better. In the eight games since Krejci took the reigns of the first line, Brad Marchand has four goals and eight assists and David Pastrnak had three goals and 11 assists.

Lots of things could come from this for the Bruins and I’m going to leave you hanging on this one. Bigger story to come.

It wasn’t so much the quantity of the saves Jaroslav Halak was making, but more the quality of them.

Halak made the save of the game on Ducks d-man Brandon Montour. Montour got the puck at the right hash mark and seemed to have a wide open net. That was all true until Halak’s glove reached up and made a remarkable stop, which held the 1-0 lead for the B’s. The play only happened because John Moore vacated the front of the net and left the slot wide open.

OH MY GOODNESS. Jaroslav Halak keep the #NHLBruins in the lead with a BEAUTY. pic.twitter.com/nMbcqaBHUs

Later in the period, Halak made two consecutive sprawling stops to keep the Ducks off the board.

Had Josh Mahura not shot a puck that went through every person in the arena and into the back of the net, Halak would’ve had two straight shutouts.

🎥 Jaroslav Halak spoke with the media after turning aside 24 shots to record his second consecutive victory: pic.twitter.com/78IW0uaGbm

Halak has played three more games than Rask this year and his stats are undoubtedly better. His goals-against average stands at 2.20; Rask at 2.57. His save percentage is .930; Rask at .915.

Like with his top two centers, head coach Bruce Cassidy has a good problem with two great goalies — Halak great of late, Rask elite in general. It should be interesting to see how Cassidy plays his cards in the back-to-back this weekend.

Everybody got a milestone!

It felt as though that on Thursday night, milestones were handed out like presents on Christmas morning. In all, Torey Krug notched the 200th assist of his career, which now ranks first among all American-born players in team history. David Backes, who passed the puck to Krug, scored the 300th helper of his career. And then of course there was Krejci with his 600th point.

All in all, spirits were high at TD Garden on Thursday night.