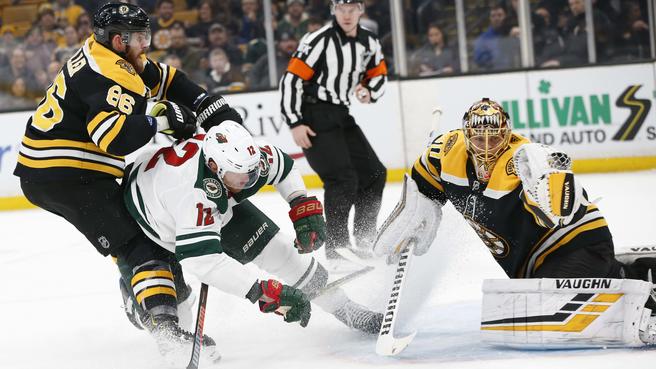 BOSTON – The Boston Bruins are rolling and there’s no better way to put it.

On Tuesday night, the Bruins took down the Minnesota Wild 4-0 in a game that felt as though it was over five minutes in. The third period was played because it had to be. The Wild had one foot on the bus the entire time.

It’s five straight wins for the B’s and there was lots to take away from Tuesday night’s W.

The biggest hole the Bruins have is after the first line, the other lines haven’t been doing their due diligence on the score sheet.

That sure as hell wasn’t the case on Tuesday night.

Danton Heinen scored the first goal of the game just a little over five minutes into the first to get the Bruins out to the early lead. It was his first goal since December 11th and only his fifth of the season.

Jake DeBrusk stayed hot, as he pitched in the third goal. It wasn’t much of his doing since the puck deflected off his chest and into the back of the net. But still, when it comes to getting points from lines other than the first, the Bruins will take whatever they can get, however they can, from whomever.

For Heinen, this is huge. He’s struggled all season to maintain any sort of scoring consistency. The only consistency for him has been staying on the third line with fellow kids Jakob Forsbacka Karlsson and Ryan Donato.

Head coach Bruce Cassidy said after the game that the lines are going to be staying the same. Here’s the opportunity for Heinen to get back his scoring touch with a bit of stability.

Tuukka Rask gets his first shutout of the season

Tuukka Rask has officially taken back the title of “1A”. I’m not going to go the distance here and say “starting job” because Cassidy consistently refers to Jaroslav Halak and Rask as “1A” and “1B”.

“Results have been happening, yeah, so that’s good,” said Rask after the 4-0 win. “Yeah, felt good since November, I guess.”

After the game, Cassidy pointed out how complete a game it was around Rask for him to post his first “0” of the season.

“He was under control all night,” said Cassidy of Rask. “I thought we did a good job keeping everything clear for him, for the most part, limited sustained pressure against. I think that helps, so he was just clean like the group in front of him. I think we’ve been playing good, team defense.”

They’re winners of five straight and this is slowly feeling like last year.

Last year, remember when the Bruins all of a sudden caught fire and it took them through pretty much the end of the season?

I’m not going to go that far out and say this will carry them through April, especially with the Washington Capitals coming into Boston on Thursday.

That could be a huge slap in the face.

But the B’s are playing good hockey. The scoring is beginning to come from everywhere, they look great in their own zone, and Rask is finding himself again.

The Bruins 100% still need to make a move to solidify the second line. But for now, everything seems to be coming up Bruins.