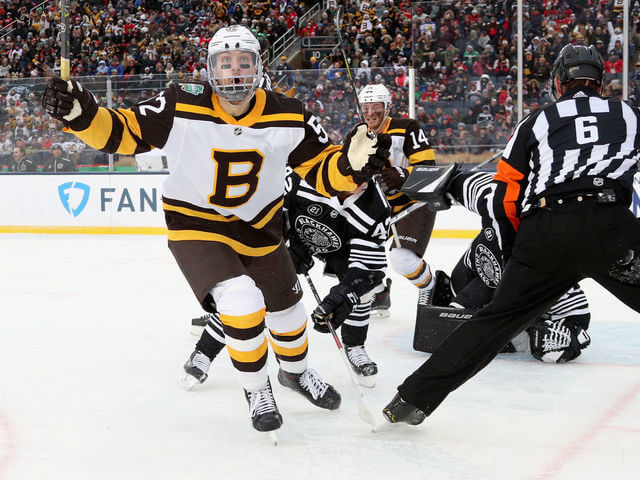 What a hockey game. What a spectacle.

The Boston Bruins and Chicago Blackhawks duked it out in the 2019 Winter Classic at Notre Dame Stadium and to say it lived up to the hype would be an understatement. The B’s walked away with the 4-2 win and two points but the Hawks put up an almost equal effort.

The Bruins now improve to 2-1 in outdoor games; both wins involved them coming from behind. The Blackhawks fall to 0-4.

Here are the big takeaways.

This was Tuukka Rask’s statement game and boy, did he make one.

Heading into this Winter Classic, no one knew who would get the nod in net for the B’s. Jaroslav Halak had played better this season but would Bruce Cassidy really stick it to Rask on a national stage like this?

Rask proved his coach right on Tuesday, stopping 36 of 38 shots from the Blackhawks and coming up big in the biggest moments.

His save on Patrick Kane’s breakaway at the very end of the first period was huge with the score tied up at 1. If that gets past him, the B’s head to the dressing room feeling much worse about their efforts.

Tuukka Rask with a PHENOMENAL breakaway save on Patrick Kane pic.twitter.com/KxjXBQ18U1

With under a minute to play in the game, Rask robbed Kane again, this time protecting a one-goal lead. Rask’s composure saved him on this one.

WHAT A SAVE by Tuukka Rask to keep the #NHLBruins ahead! pic.twitter.com/YfUGk2vgxR

Rask’s effort in this game feels like a page being turned in his season. He’s now on a two-game win streak and going off of Cassidy’s comments Monday, it feels as though Rask is their guy now going forward.

I’m not one to put much stock in the Winter Classic; it’s a normal, regular season game with two points on the line for both teams, the only difference being it’s played outdoors. But for Rask, this game meant a lot more.

It looks like the tide’s beginning to turn for Tuukka.

Sean Kuraly Continues to be Clutch

Don’t look now, but in the past two games, Sean Kuraly has both game-winners — the overtime clincher in Buffalo and this one against Chicago.

Sean Kuraly has a way with CLUTCH GOALS as the Bruins TAKE THE LEAD!

Over the past five games, Kuraly has three goals and four points and is beginning to heat up.

Cassidy leaned on Kuraly and his line heavily in the third period, which paid huge dividends after Kuraly’s goal. Wagner and Kuraly even had a 2-on-0 later in the third that saw Kuraly get stoned by Blackhawks goalie Cam Ward.

Chris Wagner is such a good hitter pic.twitter.com/RbNJpJ7ALk

If Kuraly keeps coming up big, the Bruins may not have to worry about going out and getting a third line center.

This Winter Classic Lived Up to the Hype

Heading into New Year’s Day 2019, the Winter Classic had been getting stale in recent years. Who remembers the dud that was the 2016 “Classic” between the Bruins and the Montreal Canadiens? Calling it “forgettable” would be generous.

But this year felt different.

For one, the game itself was tremendous. It went right down to the wire, featuring each team using their timeout in the final minute, and was consistently exciting. From the Bruins’ breakaway in the first five minutes of the first period to the Blackhawks dinging the iron with under five to play in the third, this game had you on the edge of your seat despite it just being a regular season game.

The venue itself was historic, which in Winter Classic terms equals better storylines. Most Winter Classics are remembered because of how legendary the venues are: Wrigley Field, Fenway Park, Michigan Stadium, and now Notre Dame Stadium.

The weather was perfect, although some snow would’ve been nice.

All in all, it was a great day for hockey.