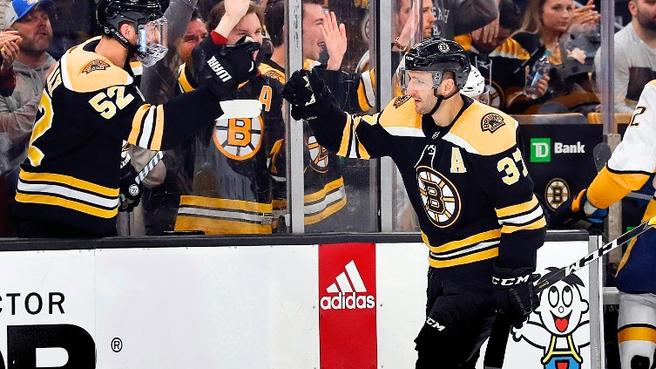 BOSTON, MA — After Saturday’s 5-2 win over the Nashville Predators, the Boston Bruins have won three in a row and they couldn’t be riding any higher if they tried.

The Predators rank second in the Central division and are the Western Conference’s third-best team. After a close first 50 minutes, the Bruins put the Preds away in the final 10.

Here are the big takeaways from the B’s third straight win over a very good opponent.

Quentin Tarantino couldn’t have scripted a return like Patrice Bergeron gave the Bruins on Saturday afternoon.

With a little over four minutes remaining in the first period, Bergeron made his return felt as he lifted a pass from Charlie McAvoy over Pekka Rinne to give the Bruins the 1-0 lead.

One goal would’ve been enough to please the Bruins. But just under two minutes into the third period, Bergeron potted another power play goal, and this one meant something as it was his 300th career goal.

Aside from scoring two, Bergeron legitimately looked right on Saturday afternoon. His time-on-ice was a bit low for his usual markings at 16:25, but that’s expected for someone who’s missed the prior 16 games.

All in all, what a return for Bergeron.

One thing Bruce Cassidy touched on after last game was that the B’s might go with tandems on their top two lines: Marchand-Bergeron, Pastrnak-Krejci. That was certainly what Cassidy did Saturday afternoon when he put Danton Heinen with Marchand and Bergeron and then Joakim Nordstrom with Pastrnak and Krejci.

Nordstrom was fine but Heinen really seemed to take advantage of the chance to play with Marchand and Bergeron.

Heinen had three shots on net and seemed to flow well next to Bergeron and Marchand. His presence around the net was solid and he cycled the puck well with the two veterans.

Is he the equivalent of putting Pastrnak next to them? Absolutely not. But when Pastrnak first got put with those two, he certainly wasn’t the player he is now.

Marchand and Bergeron make the player playing with them better and if Heinen can play well enough to stay next to them as third wheel, that effect will most likely be seen with him as well.

McAvoy has been great since the Pittsburgh loss

Ever since Charlie McAvoy had that dud of an effort in Pittsburgh on December 14th, he’s been returning to form more and more by the game.

Saturday saw him snag two assists. He should’ve had a goal as well but the NHL disallowed it. I’ll let you decide for yourself if that was goalie interference or not.

The #Preds are challenging this #NHLBruins Charlie McAvoy goal for goalie interference pic.twitter.com/a9jodYpIsJ

The poise and hockey sense he showed on the assist to Bergeron’s first goal was impressive. He simply carried it along the blue line and dished out a saucer pass to Bergeron right in front of the net. The poise comes in when he decided to pass the puck instead of shooting it. The hockey sense came when he saw the hole in coverage to pass to Bergeron.

All in all, it was a huge win for the Bruins and with Zdeno Chara and Kevan Miller’s imminent returns, it feels as though the sky’s the limit for this crew.