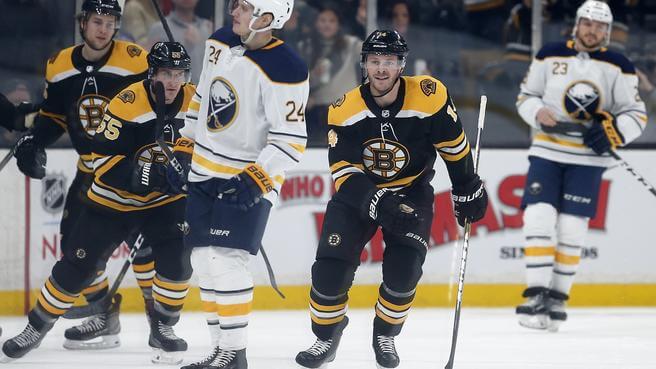 BOSTON — The Boston Bruins had a big test in front of them Saturday night and they passed it.

Even though the Jack Eichel-less Buffalo Sabres made it a one-goal game at the end, they never really had a chance — the Bruins dominated for most of the night.

With the win, the Bruins now move two points ahead of the Sabres for sole possession of third place in the Atlantic Division.

There was a lot to take away from the big B’s win.

Nothing but respect for Chris Wagner’s performance

Chris Wagner was playing one day after his grandfather, Jim Phelan, passed away.

Wagner followed that up with his best game of the season, recording a goal and six shots. His performance also powered the fourth line to be what Bruce Cassidy would call their “best line” of the night after the game.

Under a minute into the game, Wagner shot one past Sabres goalie Linus Ullmark. The only problem was that Sean Kuraly crashed the net and hit Ullmark, causing the NHL to rule it goaltender interference and call the goal off.

But, Wagner redeemed himself later in the period.

“My grandfather passed away yesterday morning so this was a special game for me,” said Wagner after the game. “Maybe he was watching out for me making the puck follow me around who knows, but he’s probably laughing after that first goal was disallowed. He would drive me around when my parents couldn’t, went to all my games, watched all these games even up until the Winter Classic the other day so it means a lot.”

Tuukka Rask is beginning to find his stride

It’s finally happening. It felt like it might not happen this year, but folks, it’s happening: Tuukka Rask is finally finding his groove.

He’s won his last three and just looks better in net. Since he threw up all over himself in Carolina, his save percentage stands at .949.

On Saturday night, the Sabres didn’t exactly pepper Rask with shots, but he still had to face 32 of them. The first one didn’t sneak past him until there was less than three minutes to play in the game.

Rask admitted that he’s feeling good after the game.

“Yeah I feel good,” said Rask. “I felt good for a long time. I think, you know every game is different and you just try to be there and give your team a chance. Play good hockey, eliminating good scoring chances. I think that goes to show we are playing good team hockey.”

The Bruins are getting hot

They’re winners of 7-of-9 and the team is almost back to full health. The Sabres are beginning to trip up and it looks as though the Atlantic Division is shaping up to be how we’d thought it would be at the top.

The lines are becoming more and more definitive. The fourth line of Noel Acciari, Wagner and Kuraly looks to be long term. David Krejci and Jake DeBrusk are forming quite the dynamic duo on the second line and successfully handling the revolving door next to them. The third line is hot and cold. The first line has always been a definite.

The Bruins play at TD Garden in seven of their next nine games and play next on Tuesday against the falling-fast Minnesota Wild.

It feels as though the mood is exponentially rising around this Bruins squad.