Sonya Curry shares her thoughts on Warriors' championship run, adoration for the Celtics 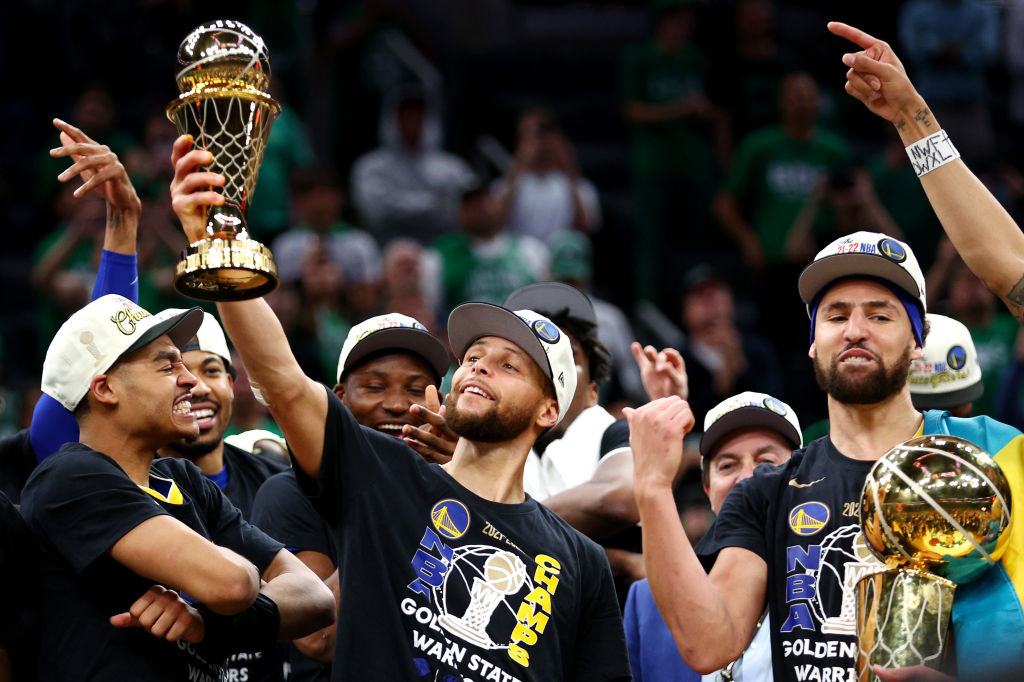 BOSTON, MASSACHUSETTS - JUNE 16: Stephen Curry #30 of the Golden State Warriors raises the Bill Russell NBA Finals Most Valuable Player Award after defeating the Boston Celtics 103-90 in Game Six of the 2022 NBA Finals at TD Garden on June 16, 2022 in Boston, Massachusetts. NOTE TO USER: User expressly acknowledges and agrees that, by downloading and/or using this photograph, User is consenting to the terms and conditions of the Getty Images License Agreement. (Photo by Elsa/Getty Images)
Share
Facebook Twitter Email

As the celebration commenced, Sonya Curry was elated, watching the Golden State Warriors in such jubilation that she couldn’t contain herself. So, she got closer before approaching the 2022 NBA Finals MVP.

“Wow,” she said to an emotional Stephen Curry. “What else do they want from you, son?”

Those were the words Sonya, the proud mother of Golden State Warriors superstar Steph Curry, said to her son as the two embraced each other on the parquet floor at TD Garden after Game 6’s 103-90 series-clinching win against the Boston Celtics. Watching her son capture his fourth title and first Finals MVP was a defining moment.

For Sonya, the mother who’s watched her son repeatedly defy the odds, taking in the thrill that unfolded in Boston that night made it all the more special. Curry is back on top for the fourth time in eight years, stunning his critics with signature performances in the 2022 Finals that catapulted Golden State back to its NBA throne.

His 43-point masterpiece in Game 4, where Curry scored 14 fourth-quarter points en route to a crucial 107-97 victory, changed the complexion of the series, as the Warriors tied their best-of-7, 2-2, before heading to San Francisco, where they gained their first lead of the Finals (3-2) in Game 5.

Then, Steph scored 22 of his 34 points in the second half of Game 6, leading his team to another title while adding a Finals MVP to his impressive resume.

“Steph ultimately is why this run has happened,” Warriors coach Steve Kerr said after Game 6. “I’m happy for everybody, but I’m thrilled for Steph. To me, this is his crowning achievement in what’s already been an incredible career.”

Averaging 31.2 points while shooting at a 48% clip from the floor, including 41.8% from behind the 3-point arc, along with six rebounds, five assists, and two steals per game, Curry guided the Warriors to another championship. And fended off any inkling of a Celtics comeback.

Before June 16, however, Sonya remembers when Steph’s greatness was constantly measured and often called into question. Two years ago, Golden State posted the NBA’s worst regular-season record (15-50). During the first week of the 2019-20 campaign – while Klay Thompson was recovering from his ACL tear in the 2019 Finals – his fellow Splash brother collided with Phoenix Suns’ Aron Baynes, who landed on Curry’s left hand; Steph ultimately needed surgery.

And the losses were stacking up. After losing the 2019 Finals to Kawhi Leonard and the Toronto Raptors and Thompson, Kevin Durant bolted to Brooklyn. Then, Curry’s season-ending injury turned the Warriors into Western Conference bottom-feeders. Then came the other questions, the ones surrounding Curry’s legacy.

Should Steph be mentioned in the same breath as the all-time greats, such as Michael Jordan, Kobe Bryant, and LeBron James? Are the Warriors still one Durant away from winning their fourth championship?

After LeBron earned his fourth ring in 2020, all eyes turned to Steph, and he rarely got the benefit of the doubt. But for the Currys, skepticism isn’t anything new.

“It used to be “if he wins one,” Sonya remembers, merely hours after watching the Warriors raise the Larry O’Brien trophy, she told CLNS Media. “I mean, back in the day, it was like “if he can dunk, then he can play.” So, (there’s) always something that people have to say.”

It’s been a pattern throughout Steph’s life and illustrious playing career. Growing up in Charlotte, North Carolina, there was always something for the naysayers to point out.

“He’s light-skinned, and they’d tease him about that, you know,” Sonya added. “I’m like, ‘Light-skinned?’ We can do this; we’re tough!”

Before 2021-22, many wondered if Curry still had what it took to lead the Warriors to the promised land. Others pondered whether Steph, 34, had enough time or talent within the Warriors’ supporting cast to muster up a fourth title run. Those doubts came crumbling after Golden State won three consecutive games at the tail-end of its best-of-7 series to capture its fourth championship in eight years.

No easy task against the Celtics; the king of the Eastern Conference boasted a 28-7 record and the league’s best defense in the final 35 games of the regular season, but in the final three matchups, the Curry-led offense made it look simple. Game 6’s series-clincher marked the first time Boston lost three straight games since December 29.

Six weeks after the Celtics found their mid-season stride towards the end of January, Curry suffered a significant setback when he sprained his foot injury against the Celtics in mid-March – which forced Steph to miss the remaining games of the regular season in preparation for the playoffs.

The Warriors, in the meantime, reverted to .500, winning six of their final 12 appearances before their first-round matchup. And the pressure mounted on Steph. Despite recovering from a foot injury, expectations were high for him to step his game up in the postseason.

However, for Sonya, what was most impressive about her son’s year was the leadership Steph displayed amongst younger teammates such as Jordan Poole and Gary Payton II. In the wake of many potential distractions, including taking classes to obtain a liberal arts Bachelor’s degree from Davidson and tabloid rumors surrounding his parents’ divorce that bled into the NBA Finals, Steph remained focused on reaching the ultimate goal.

“(That’s) the great thing about my son that I’ve learned and seen in him in his years of maturity,” Sonya explained. “You know, everybody’s focused on these four championships, but this dude got his degree. And he took his classes. So, he put the work into finishing up and getting his degree. All the other stuff rolling around him, he sets the 3-point record. The maturity in his eyes that I saw this year is that he finally realized that he is a leader, and he stepped into that role. There’s no other player.”

As for the Celtics, two wins shy of a championship, the future looks relatively bright for the young core in Jayson Tatum, Jaylen Brown, and Marcus Smart. All of whom are linked to long-term deals and entering their prime years.

Boston’s unprecedented turnaround made a believer out of one of the most unlikely supporters – the Celtics’ 2022 Finals opponent, the MVP’s mom, Sonya, who couldn’t hide her adoration for Boston.

“This is hard for me because I love Boston,” Sonya said. “I just think they have it. They have that culture (and) I just like their team. I think they got that DNA. They have it, this team. If it wasn’t against us, I’d probably be cheering for them because they come out, the players come out, they play hard, they love the game, and I can respect that as a fan of the NBA. They compete, and they’re not fanfare, they’re not a lot of showtime and all of that – they just work hard. They’re blue-collar, and I can respect that.”

Sonya also acknowledged moves made by the Celtics front office as a critical catalyst for the team’s success and believes Boston is on pace to win a championship in 2023.

“Their future is bright,” she added. “I think their future is bright if they stay together. I like their ownership, where they’re not afraid to make moves if they need to. But they’re also very diligent about what they do, and I respect that from their team, and you can see it paid off, right? So, if they keep working, they’re going to be here. They’re going to be here again next year if other teams don’t step up and do what they do. It’s their year.”