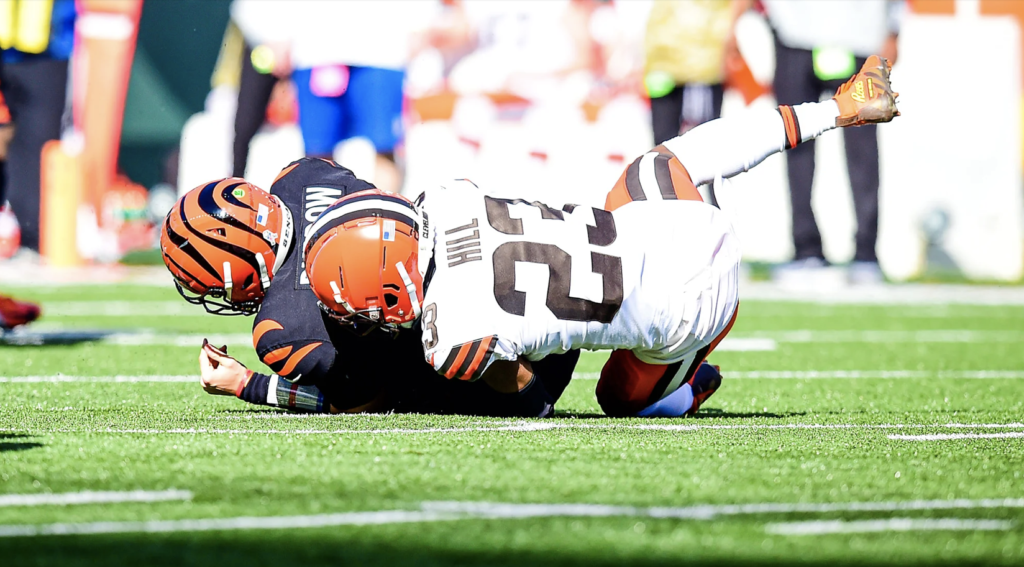 CINCINNATI – Culture doesn’t reveal itself in wins. No, true culture and team character are shown when you deliver two stink bombs to your fan base heading into the bye week.

The Bengals, by their own admission, have a lot of soul-searching and mirror glazing to do in the next 13 days before taking on the Raiders in Vegas.

The Bengals choked away a win against a one-win Jets team at MetLife Stadium with a really ill-timed interception from Joe Burrow. They also made Mike White look like Joe Namath.

The Bengals Sunday let their archrivals from Cleveland run roughshod over them on their home turf and beat up Burrow to the tune of five sacks and seven more quarterback hits. From the start, Burrow didn’t look himself.

“We’ve still got everything in front of us,” Burrow said of Cincinnati’s 5-4 record heading into the bye week. “There’s no panicking. We’ve lost two in a row. So what? We’ve got eight games left and still a chance to win the division and make the playoffs, so that’s our focus going forward.”

He stared down Ja’Marr Chase and missed badly enough to allow Denzel Ward to jump the route and ramble 99 yards for the game’s first score. He threw another pick that Ward deflected before it got to Chase that led to three more points.

The defense was again tuned up by Nick Chubb, with of 137 yards on 14 carries, including a 70-yard romp through the Bengals in the third quarter.

We were promised a focused effort. Maybe the focus was there to start but the details and execution were abysmal. Browns 41, Bengals 16. Joe Mixon scored Cincinnati’s only two touchdowns as Burrow was held without a touchdown pass for the first time in 2021.

“To be honest, as much as I want it for the players and the coaches, I just really want it for the city, man,” Mixon said. “There’s been down years in Cincinnati. I feel like as players, we should take it upon ourselves to want to get over that hump. Me as a captain and as a leader, I gotta come back off the bye and make sure everybody puts their best foot forward. Now, it’s a race to the finish when we come back from the bye, man.

“Just gotta do whatever I can to keep everybody together. I know I will. We got a lot of things to improve on and we will. Just look forward to it, go to our bye week and you learn from these mistakes. Once we learn, you gotta go out there and correct them.”

And the eternal optimist C.J. Uzomah was there postgame to offer whatever perspective he could.

I asked Uzomah why he has faith this team won’t follow the path of past Bengals teams and let this snowball into the season, post-bye week.

“The two people you just talked to, myself and other leaders of the team,” Uzomah told me, referring to Joe Burrow and Joe Mixon. “I’ve said it a lot of times. This is a different locker room, straight up.”

Words are words but CJ Uzomah talking about his conversation with Ja'Marr Chase offers hope after that awful #Bengals performance pic.twitter.com/exsdv92kBX

He then related a conversation he had with rookie Ja’Marr Chase in the showers following Chase’s two-drop day, one coming in the end zone at the end of the third quarter.

“I talked to Ja’Marr because he was the closest to me on the sideline for a little bit and then in the shower, we had a little conversation about just the culture of the locker room.”

This is where Uzomah insisted these Bengals aren’t going down the same path as the 2016 and 2018 teams that disintegrated in the second half.

“It’s different right? I don’t want to blow out of proportion things that happened in the past. We come in and everyone is pointing the finger at themselves. Ja’Marr, is like I did this, this and this.

“I’m like, ‘Dude, you don’t even know what I did during the game because you’re only focused on the things you did.’ He’s like, ‘I get that, but I’m taking the onus on myself.’ I’m taking the onus on myself. Every person you talk to is, like, ‘OK, I need to do this better,’ and I think that is something unique. OK, nice, he’s saying that, I’m picking him up. That’s unique. We know we didn’t play well enough and we expect so much more out of each other. We know what we have in that locker room and we know what we’re able to achieve when we put our minds to it and execute to the best of our ability.”

The Bengals were bad Sunday in pretty much every phase. But the mistakes were physical. The attitude was measured afterward. If you expected anger and rage after the game, the Bengals were not about to oblige. They get paid to find answers no matter how dire the results look on a given Sunday. That’s really the message behind Uzomah’s words Sunday.

Sure, fans can – and will – give up on the Bengals until they prove they’re worthy of support in a town that’s been burned time and time again. Fans see great potential in this roster and when it performs last it has for the last 67 minutes of game action, they tend to jump off the ship before they drown in another sea of disappointment.