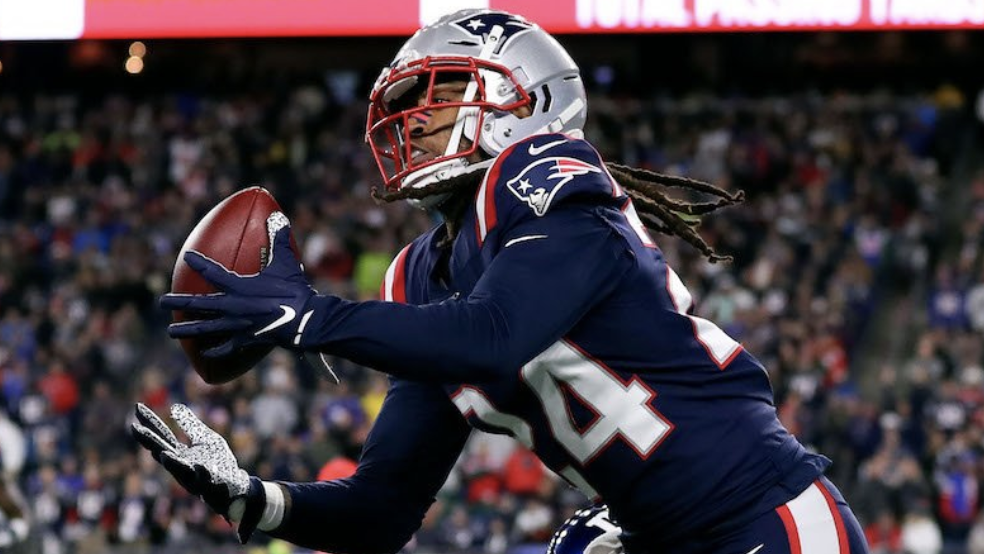 FOXBORO – Go ahead and say it: Stephon Gilmore is the best corner in the NFL.

After what we saw Thursday night and what we’ve seen in the first six weeks of the season, the Patriots is not just playing at a shutdown, All-Pro level. He’s playing in the rarified air of Mike Haynes, Ty Law and Darrelle Revis.

“Stephon Gilmore by far is the best corner in the game right now,” Revis tweeted after Thursday’s game.

Stephen Gilmore by far is the best corner in the game right now. #shutdown #numberone

He has been very good so far in the 2019 season but Thursday night was eye-opening. Gilmore’s play is one big reason the Patriots defense is playing and scoring at an all-time level.

Gilmore not only had another interception in Thursday’s 35-14 win over the Giants at Gillette, he didn’t allow his receiver to sniff any open space. He had five pass breakups and picked off a Daniel Jones pass in the third quarter when the Giants were marching down the field to open the second half. His pass breakup in the first quarter resulted in a tipped ball that landed in the hands of linebacker John Simon for the first of three interceptions that ran New England’s total to an NFL-leading 14 this season. Gilmore has two of them, including a pick-6 against the Dolphins in Week 2.

“We always feel like we should make a play no matter what the score is so we didn’t look at it that way,” Gilmore said. “If one person makes a play, everyone wants to make a play, it is contagious. That is why we are a good defense.”

Gilmore allowed just one reception for nine yards. He was targeted just six times in 31 pass attempts by the Giants rookie quarterback. That translates to an 83 percent “Ball Hawk Rate” as per NFL’s “Next Gen” stats, making a play on the ball five out of six times targeted.

Stephon Gilmore allowed just 1 reception on 6 targets as the nearest defender tonight in the @Patriots 35-14 win.@BumpNrunGilm0re finished with a 83% Ball Hawk Rate, making a play on the football (PD or INT) on all 5 incompletions when targeted.#NYGvsNE | #GoPats pic.twitter.com/n4iWSPS01b

That’s what the stats read.

But to the blind eye, it’s obvious that quarterbacks are just about ready to give up even attempting a pass in his direction because of the physical nature of his style of play. His handle on Twitter is @BumpNrunGilm0re for a reason. He gives no quarter to any receiver looking for daylight.

“We are alright, it is still early and I still have to learn from my mistakes in areas that we didn’t do well but I think we will be pretty good,” Gilmore said with notable humility. “It is fun, if one person makes a play then everyone is excited, there are no selfish squares, everyone is just happy for one another.

That’s the way Gilmore sees it. How about his teammates and coaches? How has he managed this next-level defense so far in 2019?

“I would just say he just works on his craft,” Devin McCourty told me. “If you follow him on Instagram, you’ll see he’s working on his craft in the offseason with Dre Bly. He does a ton of stuff – you know, practice field, he’s always out there repping, one-on-ones – like he’s doing all of that stuff to prepare himself. I think he has a great understanding of route recognition, what guys are running, where their splits are.”

Dre Bly played 11 seasons in the NFL and finished with 43 interceptions between the Rams, Lions and 49ers. Gilmore is in his eighth season and has 20. Last year, he was an All-Pro in his second season with the Patriots.

“It’s been awesome just to watch him, especially a guy that comes into the system and learns the system,” McCourty added. “From year-to-year, game-to-game, he’s just gotten better and better and he’s a big help to our defense. We do a lot of stuff around him and his abilities. I think what’s made us really good in the secondary is understanding everybody’s abilities, what they do well, how we need to play off each other, and I think that’s allowed us to make some more plays, even from last year going forward. Like we’ve just really understood where guys are going to be and what they do well.”

Duron Harmon was the other member of the Patriots secondary to record an interception, as his in the second quarter set up New England’s first offensive score of the night.

“I would just say the fundamentals,” Harmon told me. “There’s not too many people, really not anyone, that can run away from him. He’s fundamentally sound, takes good angles when he’s playing his press coverage to always be in a good position to not only run with the receiver but also make a play on the ball.”

Bill Belichick has always preached practice execution translates to game reality. Nowhere is that truer than when watching Gilmore.

“Yeah, Steph, he does it every day in practice and does it on Sundays (and Thursdays),” Belichick said. “He does such a great job playing the ball and had some good breaks. That last play down the sideline was a really good finish where the receiver had the ball and he got it on the way down, but he had some great pass breakups. I mean, look, he’s a very talented player and works extremely hard to prepare for the game, study his opponents and study the passing game that our opponents are going to run. This is a good example here on a short week of how diligent he works, and it paid off. He’s done a great job for us.”