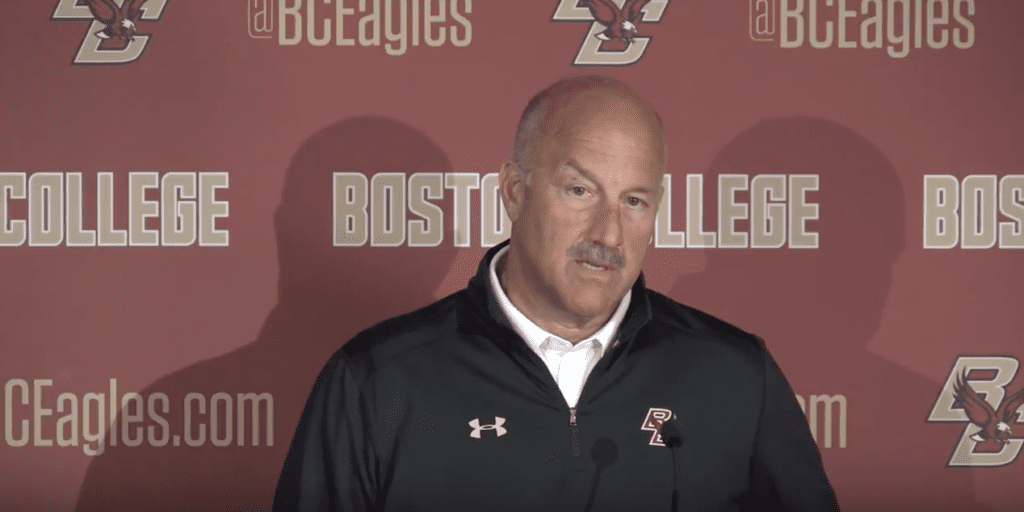 CHESTNUT HILL — There is no offseason anymore in college football, only a time to catch your breath and reload for the upcoming season. That process began Thursday at Boston College as coach Steve Addazio and the Eagles opened spring drills Tuesday inside Alumni Stadium.

But before addressing the hiring of former Giants and Buccaneers defensive coordinator Bill Sheridan as linebackers coach and Antoine Smith as defensive tackles coach, Addazio took time out to congratulate the U.S. Women’s Ice Hockey team for beating Canada in the Gold Medal game of the Winter Olympics in Pyeongchang.

“We’re excited here to kick off spring ball coming up next week. As many of you are aware, we have the announcement of Antoine Smith joining our staff, working with the defensive tackles, and also the addition of Bill Sheridan coming in and working with the inside linebackers. Both guys have built a great resume.”

Addazio also announced that Ben Glimes will see action at both running back and wide receiver, Nate Emer and Adam Korutz will shift to the offensive line. Tate Haynes will move to cornerback and Drew McQuarrie will see time at defensive end.

Defensive coordinator Jim Reid transitions to coaching the defensive ends in 2018. Reid has coached the defensive line in previous college stops including Syracuse and also helped mentor Miami Dolphins’ All-Pro Joey Porter to a career-high 17.5 sacks in 2008. In addition, Reid coached a pair of All-Pro defensive ends in Jason Taylor and Cameron Wake with the Dolphins.

“We are thrilled to welcome Bill and Jaycine to The Heights and are very excited to bring Antoine into a full-time coaching position on the field,” Addazio said. “Bill’s a proven coach with a tremendous NFL and college coaching pedigree while Antoine has been a valuable contributor to our program since his arrival.”

Sheridan brings 13 years of NFL experience to The Heights, including serving as the defensive coordinator for the Tampa Bay Buccaneers in 2012-13 and the New York Giants in 2009. Sheridan was part of the Giants’ championship run in Super Bowl XLII when they beat the Patriots, 17-14, to end the perfect season.

Sheridan’s presence in Tampa Bay was felt immediately as he helped the Buccaneers’ run defense go from last to first in the NFL as the defense went from holding opponents to 156.1 yards per game to 82.5 per game. The Bucs also led the League in opponent negative plays and tackles for loss in 2012. In 2013, Sheridan’s defense finished tied for third in total takeaways with 31 (10 FF, 21 INT).

“Going into spring ball, we’re very excited,” Addazio said. “You know, we still have a fair number of guys on the sideline in terms of that won’t be available for practice, but we’ve got so many exciting young guys right now and older guys alike that we’re going to have a chance to develop and grow and really continue to build this football program. Great level of experience had by many young guys. Some young guys this is a great opportunity to get on the field and continue to grow and develop and show their growth.

“So I think it’s all a very good opportunity for us over the next six weeks or so to continue with the growth that we had off the season and to establish our program moving forward as a program that can compete at the very, very highest level. So, we’re thrilled about that.”