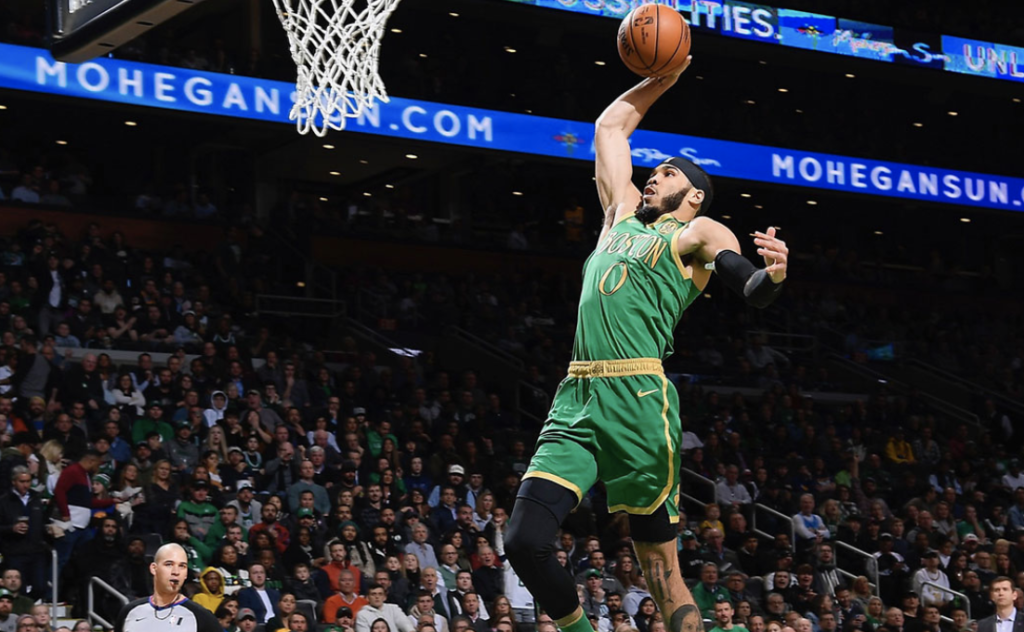 BOSTON — Steve Kerr knows a winner when he sees one. In Jayson Tatum, Kerr sees a special talent on both sides of the ball who is growing quickly into his role as Boston’s next superstar.

Kerr, who has taken the Warriors to the last five straight NBA Finals (winning three) is uniquely qualified to speak on the subject of the type of player capable of elevating his game and his team to the rarified air of competing for an NBA title.

In making his first All-Star squad from the Eastern Conference Thursday, Kerr senses that the third-year star out of Duke is that kind of talent.

“He’s coming into his own. He’s at the point now where he knows the NBA, knows the players, knows what he can get away with the refs,” Kerr told me. “He just knows the tricks of the trade and he’s gotten a lot stronger over the last couple of years. He was named an All-Star today so really happy for him. He deserves it. Great young talent.”

“I mean to be so young to be so gifted,” Lee told me. “You know he knows his spots; he picks his spots well and I mean he can score. Obviously, you saw even on minute restriction he can go out there and score the basketball. I mean he’s strong. I mean he’s 6’8’’ probably like 215, 220 (lbs). He knows his body. I mean at the end of the day the really, really good players are the ones that can control their body and he’s been playing great this year and he’s an all-star for a reason.”

“He plays like a seasoned vet,” Draymond Green added. “He’s got a lot of experience in these first couple of years and he continues to get better.”

To Kerr, what makes this Celtics team so very dangerous is the versatility on defense that Tatum and others like Marcus Smart and Jaylen Brown present. In 24 minutes Thursday, Tatum had a plus-12 on the court. His defense was solid all night, showing no ill effects from his three-game layoff.

“The key to that is strength to be able to withstand bigger players down on the block and all those guys are strong,” Kerr added. “They can stack up against anybody in the league, defensively. I think they might be the best team defensively we’ve seen all year.”

"He's coming into his own…he's at the point where he knows the NBA, knows players, knows what he can get away with" #Warriors coach Steve Kerr on newly-minted #Celtics All-Star Jayson Tatum: pic.twitter.com/7g8KFa9IpI

The Warriors won’t be heading back to the playoffs to try and make it six this season as they fell to 10-39 after the 15-point loss to the Celtics Thursday night. No Kevin Durant, Steph Curry and Klay Thompson will do that.

Tatum’s All-Star designation came on a day when he returned from an injured groin suffered eight days earlier against Memphis. He missed Friday’s win in Orlando, Sunday’s loss in New Orleans and Tuesday’s gutsy win in Miami. Before going out and scoring 20 points in 24 minutes in a 119-104 win over the Warriors, Tatum explained the very touching way he found out he headed to the All-Star Game in Chicago Feb. 16.

“I didn’t officially find out until I got here,” Tatum said of his entrance to TD Garden Thursday. “I had a good indication or a good feeling but I found out once I got on the court for pregame shooting and obviously (son) Deuce came to the back with ‘My dad’s All-Star shirt,’ so it was the icing on the cake.”

Something else that hit home with Tatum was the pregame tribute for the late Kobe Bryant and his daughter Gigi. His eyes understandably became very watery during the three-minute program that included a 24-second moment of silence and an emotional video.

“I have been watching the all-star game ever since I started watching basketball,” Tatum added. “I would always get Kobe’s all-star jersey and I always had aspirations that one day I will be in the all-star game. At 21 years old to make it a reality, I can’t put it into words. It is a special feeling.”

Thursday’s 20-point, six-rebound effort was not all that remarkable on the surface. But considering he was coming back from a groin injury, playing on a night when his childhood hero was being honored before the game and celebrating his first selection to the All-Star Game, it seemed only fitting he was on the court performing.

“Whether you’re named an All-Star or not, it didn’t really matter to us, like, he and Jaylen (Brown) have both played like all-stars and both have been such huge parts of our team, not only this year but for the last few years,” Brad Stevens said. “And certainly it’s fun to see guys rewarded, you know, and at the same time, it just adds another – another thing to work towards – to be the best that you can be.

“I’m happy for Jayson, and I thought that Jaylen handled it great. Not being named, came out of the gates playing great. So I thought the response of both guys was really good. And you know, hard to take Jayson out when it’s still a game, and, but I’m glad we got through that with him getting his wind back a little bit, under that minutes restriction.”

Brad Stevens was understandably taking precautions Thursday with Tatum, putting him on a minutes restriction and the start of the game, Tatum showed some natural rust from his three-game absence, taking just one shot (missed) and scoring just one point in six minutes in the first quarter.

“I thought he started off rusty,” Stevens noted. “I didn’t think we were great early – Gordon (Hayward) and Jaylen (Brown) had great first halves and that put us in a pretty good position. Smart’s third quarter probably sealed the game, and the threes in the fourth. But I thought Jayson looked more like himself towards his last stints.”