Storylines to Watch in Bruins Round-Robin with Flyers, Lightning and Capitals 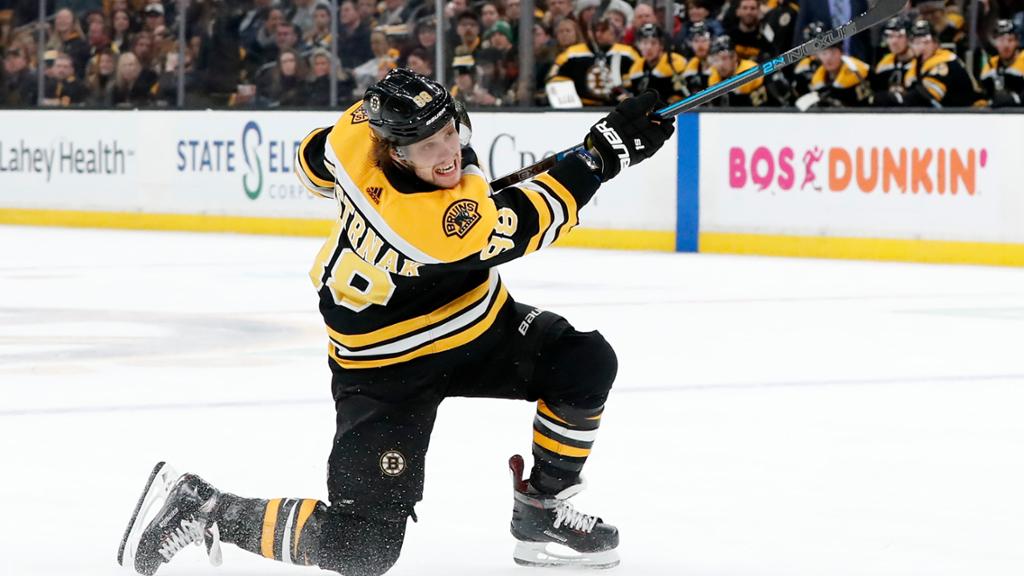 We made it. We’re here. We’re finally here.

After more than four months without hockey and with most of our brain power fixated on COVID-19, we get to enjoy the greatest sport on ice. Obviously, this country is nowhere near where it needs to be with the virus, but a nice distraction of playoff hockey is sure to help give us a break from all the bad.

The Bruins are legitimate Stanley Cup contenders — if not favorites — to raise the Stanley Cup. And, after last year’s Game 7 loss to the Blues, this crew has been on a mission since the year began way back in October of 2019.

Nevertheless, it’s fun to sit here and be able to hash out relevant Bruins storylines as they begin their march to the Cup. First on Boston’s menu is this round-robin dance with the Lightning, Capitals and Flyers. All games are sure to be interesting in the battle for the top seed, which carries the benefits of home jerseys, last change and maybe some louder “crowd noise”. The idea of attracting a lower seed as a definite positive is relevant in every sport except for hockey. Remember the Lightning last season? The Capitals? Are you telling me the Rangers don’t scare you? You can’t tell me you didn’t pick the Blue Jackets over the Maple Leafs.

These three games will be huge for the Bruins in their quest to develop a more set lineup and acclimate to the pace of playoff hockey. It won’t answer every question, but it will certainly provide a bit more clarity.

Here are the biggest storylines to keep an eye on throughout the round robin.

How does David Pastrnak look back in the lineup?

This really is the biggest question facing the Bruins as they return to game action. He’ll certainly be the most watched player through these three games. That probably would’ve been the case anyways considering he’s, well, almost a 50-goal scorer. But now the scrutiny will be at an all-time high.

Pastrnak missed all but one skate during Phase 3 due to quarantine rules. It was up in the air whether or not he’d fly with the team to Toronto on July 26. When he ventured to Toronto with his team, his first practice that next day was deemed a success by his head coach.

“His shot looked good,” Bruce Cassidy said following Monday’s practice. “A couple of plays in tight he fumbled the puck, (so) timing, execution — we’re all going through that, or have in the first week. That’s to be expected. I’m sure he’ll pick that up quick.”

Against the Blue Jackets, Pastrnak was dynamite, scoring the team’s lone goal and maintaining consistent, good play throughout the game.

And of course it’s David Pastrnak with the Bruins first goal pic.twitter.com/pM18rEKAvG

Pastrnak’s matchup against the Lightning’s best, the Capitals’ best and the Flyers’ best will be the ultimate exam on how he’s going to perform in the first round. We know Pastrnak has his legs and we know his shot is still terrific. What it ends up coming down to is how he performs with his usual line cohorts and his production levels when an elite opposition spends entire shifts dedicated to him not producing.

All signs point to Pastrnak doing just fine and adjusting on the fly. That doesn’t mean there won’t be some hiccups for No. 88 while under a magnifying glass on the ice.

What’s the deal with Ondrej Kase…?

Ondrej Kase was grouped in with Pastrnak as a player who showed up with no time to spare before Phase 3, skated one day and was in quarantine for the rest of the time. There are only two differences: Kase didn’t travel with the team to Toronto (he arrived six days after) and Kase is not nearly the player Pastrnak is, nor does he have the service time on the Bruins to yield a certain last-minute spot.

Had the season ended normally back in April, Kase would’ve most likely been on David Krejci’s right flank, barring injury. Kase was even predicted to slide in with Krejci just before Phase 3, spend all of camp there and develop enough chemistry to comfortably head into the postseason with some confidence.

None of those things happened at all.

Jack Studnicka took the spot on Krejci’s right — which we’ll get to in a second — and has played well enough in practices and the exhibition game against the Blue Jackets to solidify his spot there at least to start the round-robin.

The odds of Kase getting up to speed with the team were already low. But given how things have transpired, they’re way lower than originally thought or hoped.

Not only does Kase need to get back up to game speed, he also needs to develop some sort of chemistry somewhere in a lineup where guys have already been outcompeting him for the previous month. Bruce Cassidy still hasn’t found a spot for Kase and, honestly, how could he?

“Let’s just say it’s [Jack Studnicka] or [Anders] Bjork that takes off and Ondrej is not ready and they’ve strung together five, six or seven games and played a round,” Cassidy said. “I’d have to seriously consider making a change to a guy I’ve seen more of. But those are things to decide down the road. There may be other situations that come — injuries or whatever — and Ondrej gets his chance then.”

That’ll be when the chance comes — like once an injury arises. It’s safe to say that was not initially the case when Don Sweeney gave up a first-round pick, Axel Andersson and David Backes for the Czech winger.

The entire NHL existence of Jack Studnicka will be a storyline for the next two weeks, at the very least.

Studnicka has burst onto the Bruins lineup scene as maybe — just maybe — Krejci’s long, lost answer at right wing. Rick Nash was fun, Backes couldn’t quite keep up and Karson Kuhlman is a bit too young. Now it seems to be Studnicka’s turn as next-man-up.

The Bruins love him. Bruins fans certainly love him. Cassidy really loves him. He compared him to Bergeron this past week — Bergeron, as in the team’s heart and soul and headiest player. So far, the hype has been well warranted.

He led the P-Bruins in scoring this past season. In his two games up in Boston, he had a 9-1 advantage in high danger chances for compared to high danger chances against. He had an expected goals for percentage of 70.81. Remember that goal he scored off his chompers in the preseason?

Heading into Phase 3, I thought Studnicka would’ve been better suited starting his full-time career in the NHL next season. The conservative approach would have the immensely talented player just watch this odd postseason from the stands, spend another few months observing the strong veteran core and soak it all in. Why chance derailing a potential franchise cornerstone’s career over this thrown-together tournament?

But now with Kase’s situation and the franchise’s urgent need to win the Stanley Cup, Studnicka seems like the best option and despite the four months off, he’s in the best position to seize the moment.

It feels as if the right wing spot next to Krejci is Studnicka’s to lose.

How does the Bergeron line match up with the Couturier line?

When the playoffs roll around, it’s all about one thing: line matchups.

The Flyers are a criminally underrated team. They have the firepower up front, a good mix of veterans and younger guys (well that sounds like a certain team we all know!) and they have an elite young goalie who can carry them at any moment.

If the Bruins were to draw the Flyers in a seven-game series, what would impact them most would be Philadelphia’s first line of Claude Giroux, Sean Couturier and Jakub Voracek.

According to Natural Stat Trick, here’s how the two top trios stack up.

The Bergeron line holds an advantage in some areas, while Couturier’s bunch holds the advantage in others. They’re both powerful lines with very similar two-way strengths.

Last postseason saw the Bergeron line stumble against the Blues and the Ryan O’Reilly line. The Couturier line is a much tougher group than anything Bergeron, Marchand and Pastrnak saw in Spring 2019. Seeing these six players go at it in the first of the round-robin games will surely be exciting.

It’ll be a small preview of what’s to come if the Bruins and Flyers meet down the road.

When we left the season off back in March, the Bruins and the Lightning had just finished up two very heated games with a crash course set for the Eastern Conference Final. There was the Bruins gutsy, 2-1 win in Tampa Bay and then the Lightning’s intense 5-3 win in Boston just four days later.

Lots of hits, lots of fights and lots of skates to the penalty box.

Will that happen in the round-robin?

It’s hard to imagine what happened in their last meeting will take place in a game to get ready for the playoffs, but don’t be surprised to see the physicality ramp up. Guys are going to be finishing checks everywhere because both teams know very well that one of them will most likely be the team that represents the Eastern Conference come the final round.

Both squads are also entering this postseason with a ton of motivation — the Lightning were swept in the first round by the Blue Jackets last season and the Bruins lost in Game 7 of the Cup Final.

Will Bruins players be safe from Tom Wilson?

This storyline is equal parts amusing and deadly serious.

Aside from the fun of Pastrnak’s tweet calling Tom Wilson “the best goal scorer in the NHL”, Wilson is a legitimate force on the ice and it’s hard to imagine No. 88’s zany tweet stopping No. 43 from doing harm to a Bruin, specifically Pastrnak.

The game that sticks out is the one on Dec. 23 when the Bruins annihilated the Capitals, 7-3, on the scoreboard but were crushed on the ice. Torey Krug left that game in the second period after a hit from Wilson, Pastrnak was jumped by Wilson right in front of the Capitals bench and TJ Oshie cheapshotted Charlie McAvoy with under two minutes to play in a 6-3 hockey game.

The Bruins, for all intents and purposes, were not up to the toughness test the Capitals bestowed on them.

That night was one of many reasons the Bruins went out and got Nick Ritchie. Boston needed a power forward who could match Wilson’s impact and potentially stave off any impending Washington attack. If the Capitals were to send a missile toward a Bruin, Ritchie was the defense system put in place to shoot it out of the sky.

We saw Ritchie stand up for his teammates a bit in the seven games after being acquired from the Ducks. But it’s still yet to be determined if his presence is enough to really protect teammates from someone like Wilson.