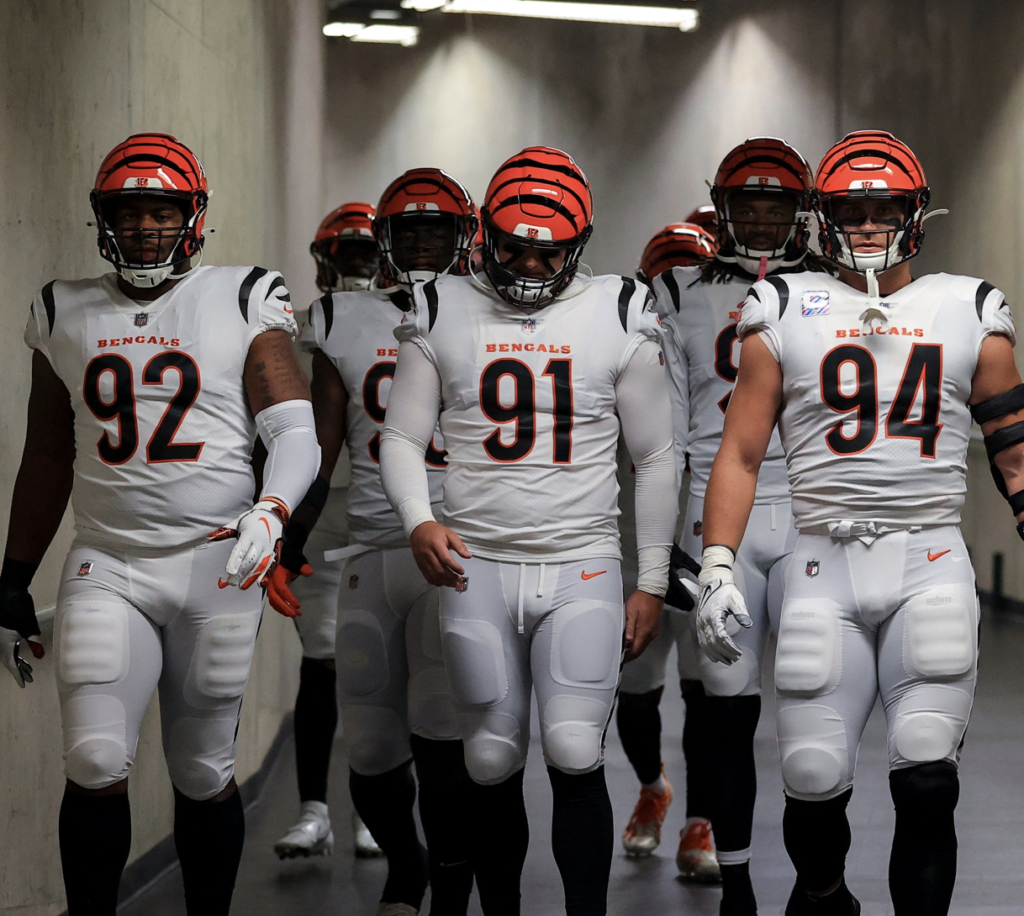 CINCINNATI – The more you play, the simpler the game gets.

Of course, that scheme varies from opponent to opponent, but the gist of the message is that his players are more comfortable than ever with what they’re being asked to do. That’s a very good sign heading into the beef of the schedule loaded with quarterbacks like Patrick Mahomes, Justin Herbert, Ben Roethlisberger and, this week, Derek Carr.

To get a sense of what Bengals coaches and players are thinking defensively during the week, just listen to them talk about Anarumo, and their DC talk about them.

“Oh, he’s a great teacher. I haven’t been on a defense where we run this many multiple defenses, and you see that we’re able to do that,” top corner Chido Awuzie told me this week when I asked him what kind of teacher Anarumo has been for him in his first year in the Bengals secondary.

“We have the guys that do it and he puts people in positions to succeed. And he gives a lot of trust, a lot of trust to his players as professionals. He tells you something that you got to do, and he’ll give you some keys, but then he trusts you that you’re going to do your own film study that you’re going to study the playbook that if it involves another player, you’re gonna bring them along with you. So, there’s a lot of trust. These coaches, the whole staff gives the players as professionals, and I really appreciate that.”

Anarumo since his days with the U.S. Merchant Marines in 1992, when he was a defensive coordinator, has always believed that you can change some of the calls and schemes but never change how you’re asking your players to play. Simply put, techniques are for individuals to master, schemes are for the coaches to call.

“I’ve always believed it since I was a young coach,” Anarumo said Thursday. “You can’t all of a sudden become a different technique in the middle of the year. If we believed in it that strongly, we should have taught it in the spring. That’s what my core values are, the techniques are the foundation of the house. Once you start changing that, it’s not going to look very good.”

Save for the poor tackling in the last 67 minutes of game action in losses to the Jets and Browns, this defense has rightly elevated Anarumo’s reputation around football. He has asked his players to play aggressively with the techniques he’s taught them and then apply them to the scheme that’s called: man, zone, blitz, man-zone, man-under, man-over, Cover-0 through Cover-4.

And most importantly to Anarumo, it’s not that they haven’t made mistakes in tackling or coverage like in New York or against Cleveland. It’s that when the mistakes are made, they immediately know what they were and correct them. This is perhaps the biggest sign of hope for the second half.

“It could be one thing one week, but it looks entirely different,” Anarumo explained. “As long as I’m telling you that you’re playing one read, instead of that being X it’s Y. That’s the flexibility. If you have nine guys that can do it and two that don’t, you can’t do it.”

Mike Hilton is expecting big things from Jessie Bates in second half of season #Bengals pic.twitter.com/7wbObbyUUd

Part of the reason for bringing in accomplished veterans in free agency like Trey Hendrickson, Larry Ogunjobi, Chido Awuzie and Mike Hilton was to arm Anarumo with players who could quickly pick up his techniques and scheme and apply it in games.

“They’re problem solvers during the week and problem solvers on defense,” Anarumo said. “The coaches do a great job of working with them on those issues. It’s not always perfect, and nothing is in this game. But they have great communication and a great mindset knowing exactly what we need to do better.”

And the simpler part?

“I would say (his defense) becomes more simple. Now, we’ve ran everything that we can run,” Awuzie added. “So, now it just depends on what week are we going to do certain calls. In the preseason, going into the first couple of games, we’re still ironing out some details of certain coverages, but now we’ve kind of gotten those details out and we’ve had the reps to show for it. So, now we kind of know what to expect, certain coverages where our weaknesses are and how to play it, and yeah, so I think it’s kind of gotten a little simpler.”

Multiple defensive schemes but the Bengals players feel more comfortable. Awuzie doesn’t just speak for himself but as a leader of a secondary that, yes, yielded a 60-yard bomb to the Browns on a collective breakdown but overall has been a strength of the defense.

“It’s definitely gotten a lot easier throughout the season,” Mike Hilton said. “Me and Chido, we’re new so this whole first half of the season we’re still getting adjusted and still really learning the ins and outs of this defense. The first half of the season we did well, now the back half we have to make sure that we’re on top of our game. It’s a lot of film out there on what we wanna run and how teams wanna attack us, so we have to adjust and be able to make plays.”

Hilton could have a big, big responsibility this Sunday against Raiders slot receiver Hunter Renfrow, someone he compared to Wes Welker.

“Historically everybody knows how successful Pittsburgh’s been, but here guys are hungry,” Hilton noted. “You can see it in the demeanor and the attitude of the guys, we wanna make a run. We have the talent, we have the coaches to go deep in the playoffs so guys are excited about the back half of the season, knowing what’s at stake and we’re ready to play it out.”

“(There’s an) attitude. We’re aggressive and attacking, so you know, if we have certain calls we got to do it full speed with aggression and execution, and we’re smart so we can execute, so that’s why I say it’s just attitude right there. It’s whatever they call, do it full speed and know what you’ve got to do and do it full speed.”

Every defensive coordinator will admit that if his players have to think too much on the field, the speed of the game will pass them by. It’s about reading your keys and making the sight-adjustments and then relying on your technique and rules. The best defenses have the their most-skilled players doing that most often.

“Something I’ve always said (is) young players (are) still worried about what their jobs are,” Anarumo said. “If I’m a rookie I’m still worried about, ‘Am I outside leverage? Inside leverage? Is my inside hand down? Is my outside hand down? Do I read the guard? Do I read the tackle? Once they become confident in what their jobs are, now my focus shifts to everything out here. ‘Ok, what’s the personnel group? What’s the formation? What are the tips the coach gave us all week to be ready to anticipate, hey, this play may come.’

“Germaine Pratt is one of the best guys we have on the field for that. He’s calling out stuff before it ever happens. And there’s other guys. But I always hear Germaine saying things. Three years ago, he’s, ‘What do I do? That’s just a young guy’s mindset over the years and it just develops and gets better, and they get more confident and to your point, they can read and react a lot faster when they know what their job is.

“As long as I can walk into the room and if you’re playing corner for me and I say it’s X technique, we’re going to use this but call it blue instead of red, as long as the technique is the same, you can add to the flexibility of the defense. I walk in and November and say all of a sudden, you’re going to stand on your head instead of standing on your feet, it could be that drastic to a player. That’s where flexibility comes in. I can tell the guys, for this defense this week, you’re playing a nine technique. Instead of calling it red, we’ll call it blue, but it changes somebody else’s job slightly, we’re able to do that stuff.”