Zac Taylor says his Bengals "in a really good place" 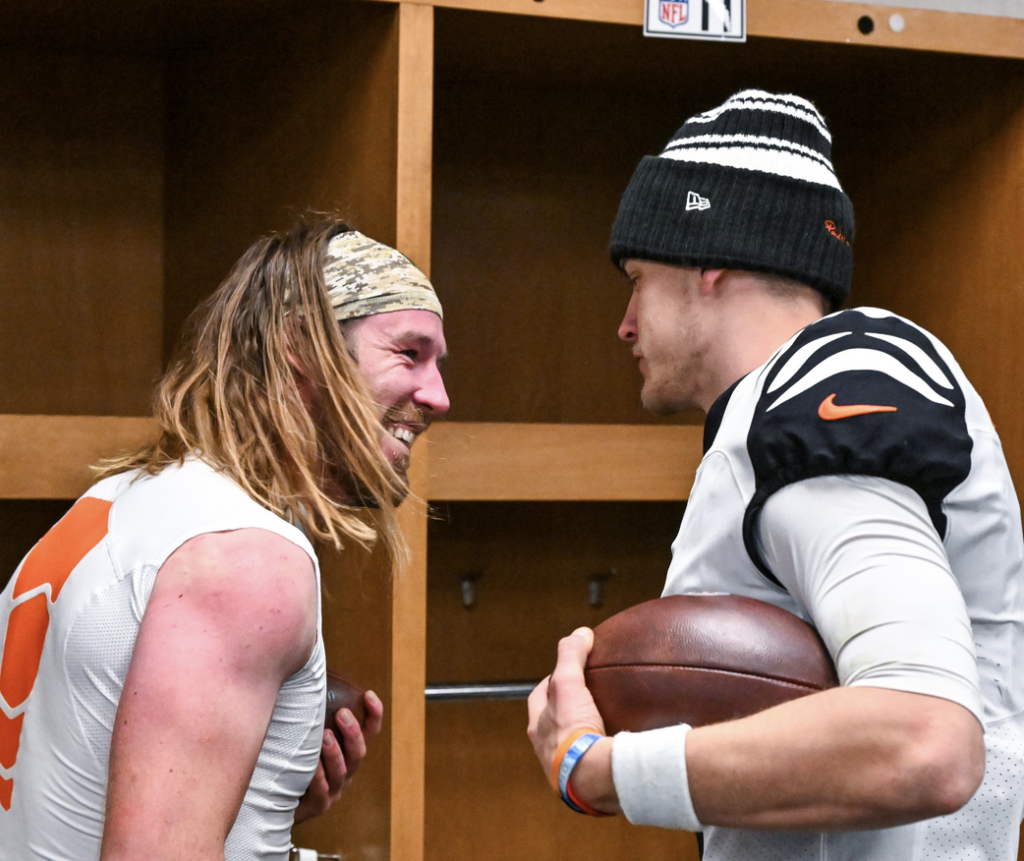 PITTSBURGH — Maybe it’s time to start believing in the Bengals again. For nine-and-a-half games this season, we’ve glimpses of what they can become and what they turned into last season on the way to Super Bowl LVI.

Heading into halftime Sunday in Pittsburgh, that faith was being tested in a big way. There was no inkling that the Bengals would score 20 points in the second half and hold on for a 37-30 win over the hated Steelers before 66, 401 at Acrisure Stadium.

Yes, Burrow was picked off on a fluke tipped pass in the first half and a freakishly good play (again) from T.J. Watt in the third quarter. But when Burrow needed to be Sunday, he was spot on, like the perfectly thrown fade route to Tee Higgins in the second quarter that set up touchdown No. 1 . Higgins caught nine passes for 149 yards and was clutch almost every time Burrow looked his way in the fourth quarter when the Bengals salted away the decisive march.

This was so sweet on so many levels for the White Bengal Tigers that walked the field Sunday. They really don’t like the Steelers, “Renegade” by Styx or cheap shots at their star receiver who fielded the onside kick with 45 seconds remaining that iced the victory.

This was a Steelers team that upset the Bengals on opening day in overtime. It looked like for all the world that the Steelers were on the verge of doing it again.

The Bengals were down 20-17. They had just allowed rookie Kenny Pickett to carve them up to the tune of five third down conversions in seven attempts. Their franchise quarterback had a pass deflected at the Pittsburgh 44 and picked off by Levi Wallace.

The defense looked out of sorts and their quarterback looked understandably frustrated when Wallace, who may or may not have actually caught the ball before it hit the ground, dove after Robert Spillane jumped up and played volleyball with the pass intended for Mike Thomas.

The Steelers answered each of the three Bengals scoring drives with identical scoring marches. The Bengals had an impressive 10-play, 92-yard drive that was capped off by a simple swing pass to Samaje Perine. Perine turned into James Brooks, circa 1988, and outran the defense to the right sideline and tip-toed to the end zone.

You remember Samaje Perine, the man who caught the touchdown pass late in the first half against Kansas City that pumped life into the Bengals when they were down 21-3 in the AFC Championship Game.

“Our guys are great at those screens,” Burrow said. “We’ve got big, athletic guys upfront that can get out and move get out in space and get a body on a body. And then Samaje is also great at those screens. He showed it in the AFC championship last year and he’s shown it all year we love those plays.”

Joe Mixon was knocked out of the game with a concussion in the first half. That left the Bengals with Tee Higgins, Tyler Boyd, Hayden Hurst, Perine, Trenton Irwin and Trent Taylor as targets for Joe Burrow.

On this day, it was Perine and Irwin accounting for all four touchdowns in an improbable formula for success.

What the Bengals showed in the second half Sunday was the exact tenacity it’s going to take to make another run to the postseason. The Bengals defense that had been ravaged by a first-year quarterback in the first half managed to send the Steelers offense back to the bench three straight times on three-and-outs.

The Bengals Sunday scored touchdowns on a 92-yard march down the field and a 93-yard journey in the second half. These were no ordinary drives. These were drives against the likes of T.J. Watt, Alex Highsmith, Cam Heyward and Minkah Fitzpatrick, four names that Burrow was seeing in his sleep.

There was also punter Drue Chrisman making his long awaited debut with the Bengals, rocketing 53 and 57-yard punts in the first half and a clutch 40-yarder from his own end zone in the fourth quarter with the Steelers breathing down the Bengals’ necks.

There was so much to worry about in the first half and so much to take hope in from the second half. The Bengals are 6-4 and two games over .500 for the first time in 2022. They’re one game behind Baltimore in the AFC North, with “everything still in front of them” as head coach Zac Taylor is fond of saying.

“I feel like we’ve had good momentum,” Taylor said. “This team’s in a really good place. And so, again, we feel like we played really good football most of the last several weeks we’ve had.

“And this is the expectation when we go on the road, that we find wins in this division this way. I know the guys are going to be excited to get cranked up and go back to Tennessee next week. It’s going to be a hard-fought game. And our guys are ready for it.”

Their number was called and they delivered. A great team win 👏

So many factors were working against the Bengals Sunday. The icy and blustery weather, the highly questionable turf, T.J. Watt playing freak athlete with Burrow’s passes. The Bengals losing their top running back in the first half. It just didn’t feel very promising.

But these Bengals have developed a resiliency that was first on display last season at about this time. Remember when the Bengals came out of the bye last year at Las Vegas and the first drive resulted in a Burrow turnover?

Recall the game in Denver when the Bengals were down 10-9 and couldn’t find a way into the end zone.

Remember the first Kansas City game when the Bengals were down 14 points three different times before rallying at home to win the division? So many examples come to mind of the Bengals winning in the last two seasons with Burrow at the helm. Sunday was the third time this season the Bengals didn’t blink and the first time since trailing in the fourth quarter at New Orleans.

Asked Tyler Boyd how Bengals kept poise on road down at half. "We're a championship caliber team." pic.twitter.com/EHRVi4RyPx

The Bengals and Joe Burrow have shown resiliency before. On Sunday, it pumped new life into a team that begins a stretch against playoff-caliber, division-leading team.

“We’re a championship-caliber team and we’re never counting ourselves out as a team,” Boyd told me. “No matter what the score, we feel like we can always overcome any deficit.”

The Bengals would like to not put that to the test too many more times, but adversity is going to come at the team in Stripes in the final seven games. Sunday was proof they won’t blink when it does.