Super Bowl Preview: the Patriots Match Up Well Against the Rams 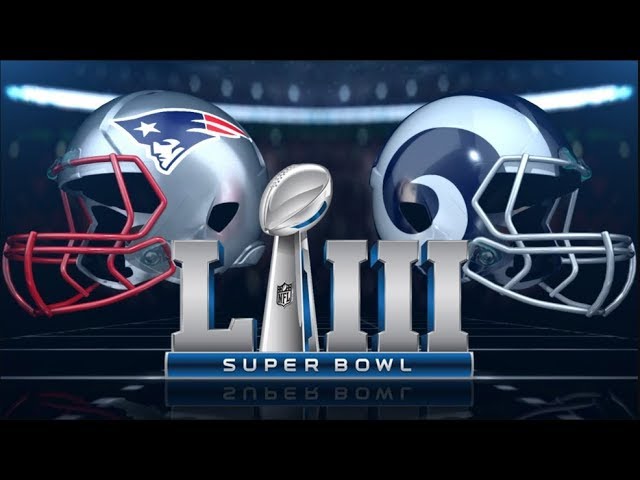 Before you say it, I’ll say it for you; the Belichick and Brady era Patriots always play close games in the Super Bowl.

In New England’s previous eight trips since 2001, win or lose, the big game has been decided by eight points or less in each instance.

Despite blowing out teams on a regular basis over the last 18 seasons, the Patriots take years off all our lives with all these close games in the Super Bowl.

I’m not suggesting that the Patriots will blow out the Rams, but on paper, this matchup favors New England for multiple reasons.

The Los Angeles roster is loaded, and you’ll probably hear plenty of “they’re more talented than the Patriots” in the next two weeks.

But this Rams team isn’t on the same level as the Patriots’ previous three Super Bowl opponents in the 2014 Seahawks, 2016 Falcons, and last years Eagles.

Here are five reasons why the Patriots have the upper hand against the Rams:

1. The Rams Offense Is In a Relative Slump

Since its 54-point explosion against the Chiefs in Week 11, the Rams offensive production is down across the board.

That’s not to say they aren’t good, they’re still averaging nearly 28 points per game, but the scoring came back down to earth after a ridiculous start to the season.

The dip in production also coincides with a season-ending injury to wide receiver Cooper Kupp, and poor play by quarterback Jared Goff.

In Los Angeles’s first 11 games, they averaged over 35 points and scored 28-plus in ten of those games to start the season.

The Rams played some good defenses down the stretch in the Bears (first in DVOA), Cowboys (Divisional round, ninth in DVOA) and Saints (NFC Championship Game, 11th in DVOA).

But the Patriots defense just held its own against a better offense in the Kansas City Chiefs, and the Rams aren’t the unstoppable force that they were earlier in the season.

Since their bye in Week 11, the Patriots defense is third in the NFL in pressure rate (43.1 percent), and they pressured Patrick Mahomes 50 percent of the time in the AFC Championship Game.

They’ve discovered a pass rush by turning up the creativity in the front seven, relying heavily on stunts and various disguised blitzes to disrupt opposing quarterbacks.

Next up: Rams quarterback Jared Goff, who is one of the worst quarterbacks in the NFL under pressure.

This season, Goff has a 48.3 overall grade under pressure, and his completion percentage plummets nearly 30 points when he faces pressure, according to Pro Football Focus.

Goff isn’t just inaccurate under pressure; he’ll also throw the ball to the defense, and is easily flustered by pressure if you get to him early in the game.

And his processing speed is still slow at times as he fails to anticipate throws making him a “see it, throw it” type of quarterback which also bodes well for New England.

Belichick and de facto DC Brian Flores took aim at both Mahomes and Philip Rivers the last two weeks; expect them to do the same against a quarterback that’s much worse under pressure in the Super Bowl.

Rams head coach Sean McVay is arguably the brightest offensive mind in football, and anyone associated with the boy-wonder is up for a head coaching gig.

Out of all the matchups in this one, the coaching chess match between Belichick, a 66-year-old defensive mastermind, and the offensive-minded McVay (32 years old) is fascinating.

But believe it or not, McVay’s offense from a personnel standpoint is actually quite simple.

“They switch things up a lot. They just do it with the same players. That’s what makes them so good is everybody can do everything,” Belichick said.

This season, the Rams were in 11-personnel (three WR, one RB, one TE) on a league-leading 96 percent of their snaps on offense. That’s not a typo.

Plus, with those tight alignments, it’s easier for receivers to block in the running game in the Rams’ zone concepts allowing Gurley to get on the edge.

Although it has its advantages, and McVay has plenty of compliments to LA’s core concepts to keep it fresh, the Patriots should know what to expect in two weeks.

Most of what the Rams do offensively builds off of their outside zone blocking schemes in the running game.

For example, here’s an eight-yard run by running back C.J. Anderson last week against the Saints. The Rams run outside zone to the left with Woods and Reynolds basically serving as tight ends in the blocking scheme in one of those tight formations.

Earlier in the game, Los Angeles was in a similar formation and ran a bootleg action off of the same outside zone blocking scheme.

When you hear horizontal offense, it sounds scary from a Patriots perspective due to their struggles against crossing routes in the past.

But they’ve steadied the ship for the most part in that regard, and with three wide receivers on the field, the Patriots will be in mostly nickel defenses to combat the speed of the Rams offense.

McVay will incorporate some empty formations flexing Gurley or Anderson out wide, but unless they do something completely different, the personnel won’t change for the Rams next Sunday.

4. Is the Rams Postseason Run Defense For Real?

During their playoff run, the Rams held the Saints and the Cowboys to 2.3 yards per rush which is a significant improvement from their run defense during the regular season.

In the regular season, the LA defense was 28th in DVOA against the run and dead-last allowing 5.1 yards per rush to opposing offenses.

In the Super Bowl, we’ll find out if the turnaround against the run was a two-game fad or if the Rams turned a corner defensively against the complex and potent New England rushing attack.

As you’d expect, Aaron Donald and Ndamukong Suh are a tour de force in the middle of the Rams defense, but the splits for inside runs versus outside runs against the Rams are staggering.

On inside runs, teams averaged a still respectable 4.1 yards per rush during the regular season.

But on outside runs, away from Donald and Suh, teams averaged 5.1 yards per carry.

Expect the Patriots to try and get both Sony Michel and maybe even Cordarrelle Patterson outside the formation to play keep away from Donald and Suh.

Lastly, although the Rams defense ranks ninth against the pass in DVOA, there are weaknesses and tendencies in the LA secondary that Tom Brady will exploit.

First, this isn’t the same “No Fly Zone” defense that Wade Phillips coached in Denver.

Due to their personnel, and struggles in man coverage this season, the Rams play a lot more zone coverage than those Denver teams ever did.

So far, the Rams were in zone coverage on 47.9 percent of their defensive snaps in 2018.

For comparison, the Patriots had the fewest snaps in zone coverage this season at 29.8 percent.

Knowing Brady as well as he does, it’s possible that Phillips, who is game-plan specific, will play man coverage against the Patriots in the Super Bowl.

But based on what we know, I like the Patriots’ odds against this secondary.

Along with their zone tendencies, LA ranks 28th in DVOA against number one wide receivers, and that stems from the struggles of top cornerback Marcus Peters this season.

Peters is allowing a passer rating of 109.9 into his coverage this season, and if they can get him to move inside on Julian Edelman, that rating climbs to 129.0 out of the slot.

The Rams might keep Peters away from Edelman, opting for slot cornerback Nickell Robey-Coleman instead, but the Patriots ought to force that matchup as much as they can.

Against Cowboys rookie Michael Gallup and others this season, Peters’ effort level has been subpar, and his willingness to tackle almost nonexistent.

The only bad news for New England is that the Rams were fifth and fourth respectively against tight ends and running backs in DVOA.

However, the Saints showed the Pats that there are opportunities to throw to the backs and tight ends, and screen passes against an aggressive Rams defensive front can be effective.

Here, the Saints leaked tight end Josh Hill out on a screen pass, and the following play is one of running back Alvin Kamara’s 11 catches in Sunday’s NFC Championship Game.

When you reach this point, there are no easy matchups.

But as far as Super Bowl opponents go, the Patriots have faced much stiffer competition than these Rams.