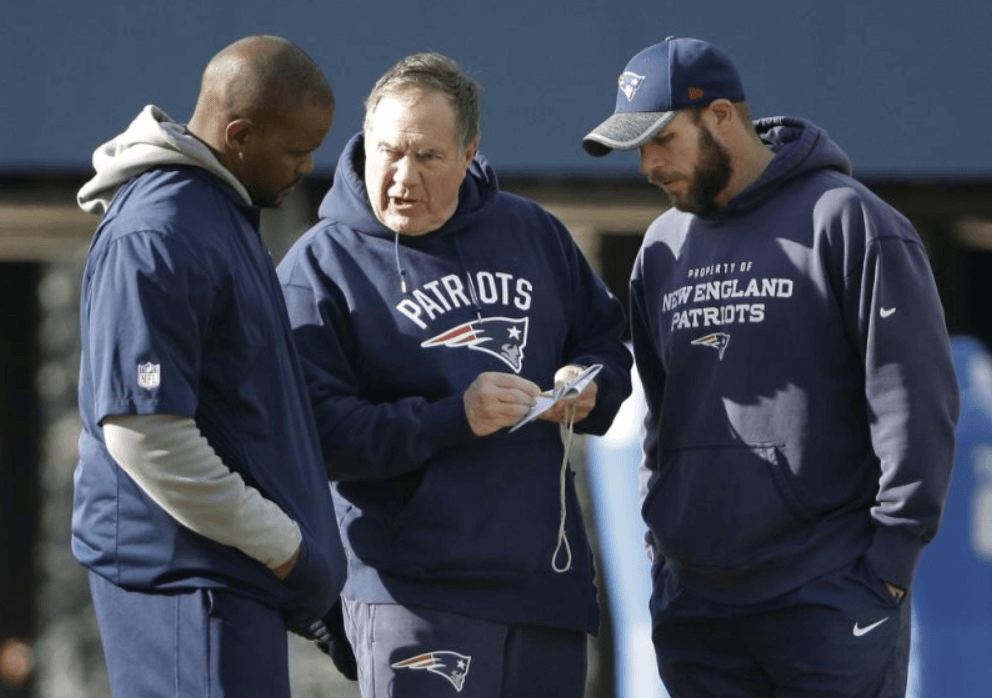 ATLANTA — For all that is made of the camaraderie and chemistry amongst players in a successful locker room, the chemistry among the coaches might be just as important.

There is a uniquely strong bond between Bill Belichick and his coaches that transcends the field. It is a bond that justifies working 15-18 hours a day, spending 30-45 minutes in a contraption that makes it feel like you’ve spent four hours sleeping, just to keep up with the man at the top.

Talk about giving #EverythingWeGot. It’s that and then some with Belichick’s coaching staff.

Every NFL staff works long, long hours. But the Patriots have a coaching group that is unlike any other in the NFL. Every coach that enters the building with Bill Belichick before dawn and leaves when its dark (or doesn’t leave) knows what they’re getting into when they sign up.

“The coaching dynamic is a little different just because of the amount of time we spend together,” Belichick told me this week at the Super Bowl. “Players spend a lot of time together but you could probably double that for coaches, from the morning meetings to all the practice film study and so forth with the players to the post-practice nightly meetings, preparation for the following day and of course, on the days off, when the players are off, the coaches are meeting, game planning and so forth.”

The list of assistant coaches that have left Belichick’s nest for head coaching jobs is long, starting with Nick Saban (Michigan State) when Belichick was with the Browns in the early 90s. That continued with Charlie Weis (Notre Dame) and Romeo Crennel (Browns) in 2005. It continued with Eric Mangini, Josh McDaniels, Bill O’Brien, Jim Schwartz and Matt Patricia.

It will presumably continue after Sunday’s game against the Rams with Brian Flores taking over in Miami while receivers coach Chad O’Shea leaves to become Flores’ offensive coordinator. Flores first burst onto the national scene with his famous “Malcolm, Go!” directive to Malcolm Butler at the end of Super Bowl XLIX, on the play that resulted in Butler’s pick to seal the 28-24 win over Seattle.

But where does it all begin? It begins with Belichick letting each coach own responsibility for his unit and fight for his unit and their players. He reminds them that ultimately, he as the HC of the NEP has the final say but he wants them to state their case.

This year’s Patriots staff had to adjust early after the 1-2 start to the season. Even when there were games where the Patriots were getting beat in the trenches, Belichick had faith that Dante Scarnecchia (the offensive line coach Tom Brady called ‘best in NFL history’) and defensive line coach Brendan Daly would get things turned around. They did. Belichick also has Joe Judge on special teams and Josh McDaniels as offensive coordinator.

“The ability of coaches to work together, offense and defense, or offense, defense or special teams or the coaches within a particular side of the ball, offensive coaches, defensive coaches, it’s critical to being productive and again, having been in all those positions myself, special teams, offense, defense, assistant coach, play caller, head coach, you have an appreciation for everybody’s spot on the roster. Each person has a specific set of responsibilities that interact with others. Ultimately, they don’t have the final say but they have an important role in the contribution to the team and to the staff. It’s a lot of balancing in there. It certainly takes good people to work together, to have productive staffs.”

Belichick learned all about staff chemistry, ironically, under one of the coaches he sometimes butted heads with, Bill Parcells of the 1980s Giants. But Belichick learned an important lesson there. To have lively debate can often lead to invaluable conversation and perspective that shows up on the biggest stages, like Super Bowl XXV against the Bills.

“Again, I feel very fortunate to have had a lot of those,” Belichick said. “Certainly, this is a great one and people that I have now. But I’ve had many along the way, and as an assistant was part of many. When I was with the Giants, one of my relationships was with Tom Coughlin, when he coached the receivers, I coached the defensive backs in 89 and 90. We worked together on a daily basis, helping each other, things he would see that other teams did technique-wise he’d mention to me or I’d mention to him the receivers, ‘This is a good pattern. This is a good technique the way this guy runs this pattern.'”

This could very well explain why Flores is reportedly taking O’Shea with him to Miami.

“It can be very beneficial to work with not only a coach on your side of the ball but a coach on the other side of the ball to improve that way,” Belichick continued. “Tom Bresnahan was another one when he was the offensive line coach with the Giants. We used to talk a lot about blitz pickup, offensive line play. I learned a ton about offensive line play from my ride into work with Tom. We lived close to each other. We’d ride to work and talk about things like that for a half hour, 45 minutes a day. You can learn a lot doing that. It’s certainly a big subject matter, a lot of people involved but it’s critical to the success of the team.”