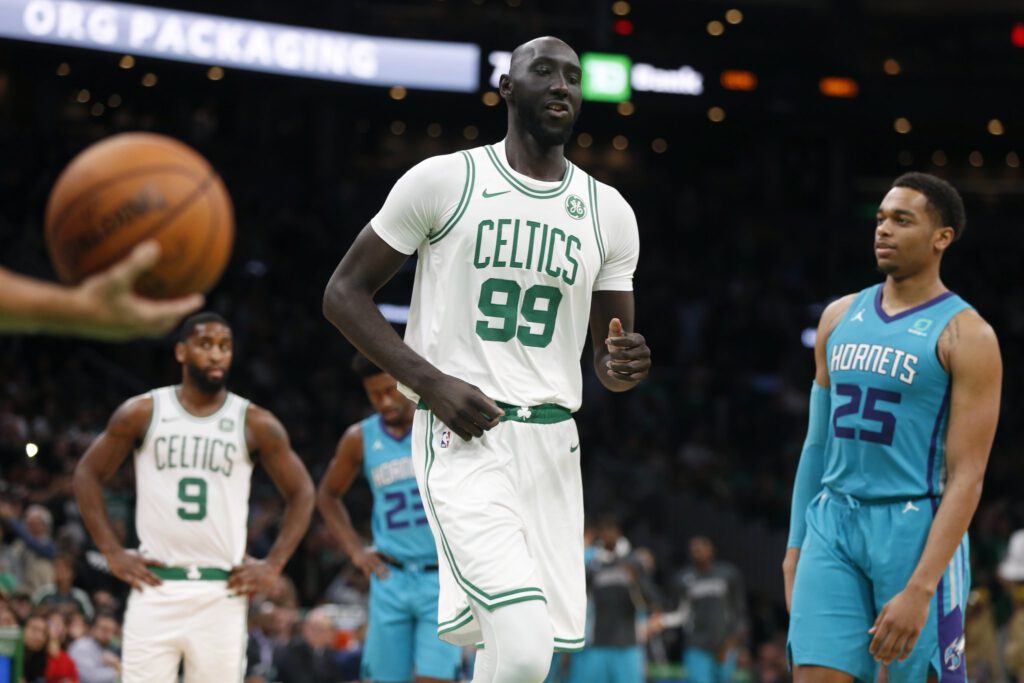 The Tacko Fall hype train is roaring full steam ahead and isn’t showing any signs of slowing down.

And why would it?

The 7-foot-5 (new official listing) rookie certainly delivered excitement at TD Garden Sunday. In his eight-minute performance, Fall had the crowd on its feet when he slammed in a dunk and blocked two shots.

He finished with five points and three rebounds after his second-half entrance. Celtics fans were drooling to see Fall check-in, so much so that they even got a second-quarter “WE WANT TACKO!” chant going.

Brad Stevens felt the pressure of subbing Fall into the game early and often throughout the night.

“Everybody wants Tacko,” Stevens said. “My kids are the same way and everybody else. I think that’s cool, and that’s great. I just hope people continue to appreciate him for what he is as a person and how hard he’s working to try to make it to the NBA because he’s a really good kid, and he’s really, really working hard.”

It’s Fall’s work ethic that got him this far, something Stevens likes to remind people about his undrafted prospect. Fall isn’t on his preseason roster solely because of his height and hype — one that had one young Celtics fan tell his father “we’re going to see one of the biggest people in the world!”

Sure, the excitement is natural for a guy this tall but if Fall is going to make Stevens’ regular-season roster, he’s going to have to continue to prove himself as a viable defender. The pair of blocks is a good start and when the Celtics travel to Orlando Friday to take on Nikola Vucevic, Aaron Gordon, Jonathan Issac, and the rest of the Magic, it’s going to be another great test for the young prospect.

Fall will have a shot at defending talented big men, who often roam the paint and like to stretch towards the perimeter — where it’ll be interesting to see how Fall fares defensively. Pick-and-roll defense is another facet of Fall’s game people should keep a close eye on.

It’s fair to say Fall’s offensive prowess is limited. He’s capable of capitalizing on put-back opportunities and converts when he has the ball in the paint but if Fall can prove he can put the ball on the floor and score, it would better his chances.

Either way, the hype surrounding Fall and his shot at making it to the NBA isn’t going to disappear anytime soon, and through it all, he’s having a great time.

“Pressure?” he asked. “I feel like I’m in a dream,” Fall said. “I’m in the Garden, playing with the Celtics and with all these great players. There’s no pressure, it’s just a matter of going out there and having fun.”