Takeaways From Bruins Big Weekend; Pastrnak & Halak Up, Backes Down 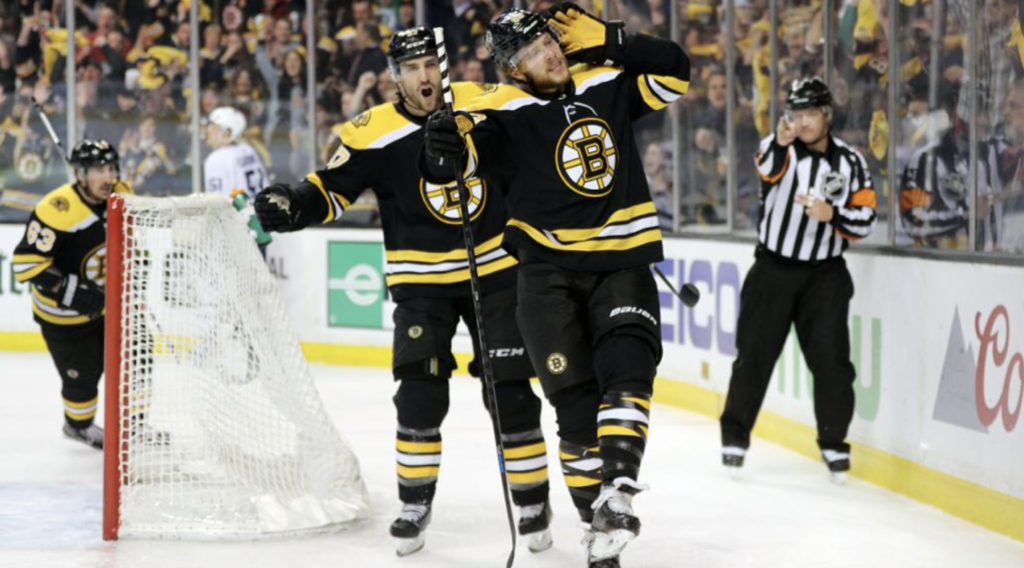 What a weekend for the Boston Bruins.

On Saturday, the Bruins met up with their Atlantic Division rivals, the Toronto Maple Leafs, and crushed them 5-1. The following night saw them best the Vegas Golden Knights 4-1. Both teams proved big tests for the Bruins as the Leafs took them to seven games in the first round of last year’s playoffs and the Golden Knights made it all the way to the Stanley Cup Finals.

With those two wins, the negativity stemming from Thursday’s 8-5 loss to the Vancouver Canucks was swept under the rug and for that reason, there is a lot to takeaway from the weekend that was for the Bruins.

To say Jaroslav Halak had a good weekend would be an understatement.

Halak stopped 40 of Toronto’s 41 shots on Saturday night and followed that up by saving 37 of Vegas’ 38 shots the next night. That’s 77 saves on 79 shots.

*Cue your eyebrows to raise*

“Well, we’ve seen it from day one,” said Head Coach Bruce Cassidy on Halak’s weekend. “We knew he was a good goaltender. I couldn’t sit here and say he’d be leading the league in save percentage, goals against, or whatever he is, first or second. We knew he’d be solid. He’s certainly exceeded expectations, and it’s whats required right now.”

Among goalies with at least 10 games played, Halak leads the league in save-percentage (.945) and goals-against average (1.77).

#NHLBruins Jaroslav Halak with the BIG SAVE on #VegasBorn Jonathan Marchessault pic.twitter.com/g7KPQj7NNd

Halak had his best stretch of hockey this past weekend when he stopped 20 Maple Leafs shots in the first period alone. Many of those shots came on the Leafs’ first power play.

“We just wanted to kill the first one and be 0-0,” said Halak on Saturday night. “We were able to do that and I think after that we started playing our game.”

With Tuukka Rask on a temporary leave of absence, it’s tough not to think Cassidy would pencil Rask in as the starter to boost his low confidence. But let’s face it: Rask hasn’t been good this year. His 4-4 record with a .901 save percentage and 3.05 GAA have been mediocre at best.

Halak has been flat-out better and this weekend proved that he should be the starter going forward.

“I’m happy for him,” said Cassidy of Halak. “He’s a hard-working guy, and he’s had good success in this league and it’s required for him right now, and he’s giving it to us. Just keep on going, Jaro.”

David Pastrnak is on another level offensively

We’ve been saying this since the start of the seasons but it bears repeating. Pastrnak and his fellow first line-mates (Patrice Bergeron and Brad Marchand) continue to dominate.

All three musketeers of the line lead the Bruins in points: Patrice Bergeron (25), Pastrnak (23) and Brad Marchand (20). After last year, that’s become the norm around here.

But the real standout his been Pastrnak and his uncanny goal scoring ability. After a four goal weekend (3 against Toronto, one against Vegas.) He now leads the league with 16 goals on the season. Next closest as 12.

“He gets open that’s the thing, and he finds that soft area,” said Bergeron of his Czech linemate. “He works hard to get the puck back and being good on the forecheck to make sure that we can go and stay on the attack. Those are details that go a long way.”

As things currently stand, Pasta is on pace for 70+ goals. That probably won’t happen. 50 seems a lot more realistic.

Despite the gaudy numbers, Cassidy looks at other things to show how Pastrnak’s game has grown since the end of last season.

“I think just, honestly, stronger on the puck,” said Cassidy. “Before he’d try his one-on-one moves and he’d get pushed off, and I don’t think he had the strength to battle like Marchy does, for example. I think it’s just physical maturity, to be honest with you. A little more willing to hang in front of the net. That’s the Bergy effect.

His other linemate has loved watching his development into what he’s become to start this season.

“He’s had years where he’s come out really hot and kind of tapered off,” said Marchand. “But the confidence level he has now, the way he’s shooting the puck, I don’t think it’s going to. He’s an incredible player, he has a ton of talent and he’s figuring the game out now which is making him even more dangerous. It’s been a lot of fun to watch him.”

If Pastrnak can continue to put the puck in the back of the net at even half the pace he’s doing it at now, he will be the B’s top offensive weapon.

It’s only been two games but the young, fast line of Danton Heinen, Jakob Forsbacka Karlsson and Anders Bjork paid real dividends in both games this past weekend.

Their impact was felt the most in Sunday’s tilt with Vegas when Bjork connected with Heinen for the first goal of the game. Heinen gave Bjork a perfect area pass that let Bjork gain speed getting to it, leading to his pass out front and the tip-in from Heinen.

“It was a good goal,” said Cassidy. “They did it the right way, started in the d-zone, they played it, they won a puck, got behind their d, won a foot race and got it to the front of the net, so it wasn’t lucky. It wasn’t a fluke. It was the right way to do things, and they got rewarded for it.”

The third line puts the Bruins on the board first!

Heinen, the most experienced NHL player on the line with a year of service, felt like his new line could be a jumpstart for the B’s.

“Yeah, I think we need to be a line like that, that can, you know, chip in offensively when needed,” said Heinen. “Obviously that top line is the majority of our scoring, and they’ve been great and they were great tonight again, but you know, when they’re not there we need to be reliable and chip in every once in a while.”

Despite some running around in the defensive zone in both games, Bjork feels something brewing with this crew.

“I think it starts with us playing hard,” said Bjork. “Especially attacking on the forecheck. I think JFK plays so well defensively and so does Heino too. I think we have been solid there and, obviously we can improve a little bit but that’s helped our transition game which has helped us get in on the forecheck and that’s where we’ve created opportunity just by attacking and screening hard. Hopefully we can continue that.”

JFK replaced the slow and slumping David Backes who was demoted to the fourth line. Forsbacka Karlsson’s speed was a noticeable factor in making that 3rd line go.

So why is JFK winning the third-line center spot now instead of at the beginning of the season?

“Maybe just time,” said the coach. “Maybe just expectations for us were high. I would guess that six weeks or whatever it is that he’s been down there after a full year, I would guess he’s hungry to be here and stay. He had a quick indoctrination here against Washington a couple years ago, one game, and then goes down there and doesn’t play a lot with the big club and then preseason doesn’t work out.

“I think at some point the switch has to go off, okay this is what I need to do, and I think he’s doing what we’re asking him to do, and he’s playing to his strengths.”