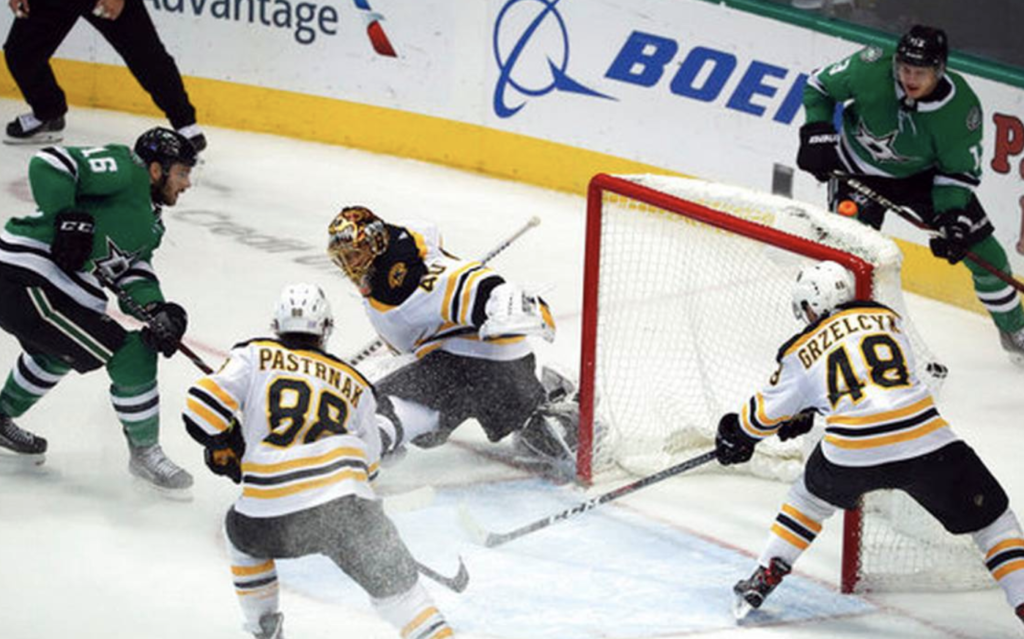 It’s rare for a team to be satisfied with an overtime loss. But for the Boston Bruins, a team ravaged with injuries, that point was well earned in Dallas Friday night.

It took a little over 61 minutes for a puck to find the back of either net. For a 1-0 game, this one was as exciting as a game with no goals in regulation could possibly get. It had fights, tension, brawls, nastiness, and top-notch goaltending.

All in a mid-November game between two teams who aren’t even in the same conference.

To say there was a lot to take away would be an understatement.

Hands down this was Tuukka Rask’s best game of the year.

Rask stopped a total of 36 shots on 37 attempts. He played so well that the goal scored by the Stars Jason Dickinson took three attempts until it went in.

The Bruins lose a heartbreaker in OT on this Stars goal

What’s more, the 36 saves came behind a defensive unit with three rookies (two of which were making their NHL debuts), two guys listed at 5’9″, and Steven Kampfer.

Rask’s best save of the night came on Stars left winger Valeri Nichushkin just two minutes into the third period. Right off the bat, it didn’t look like that impressive of a save until you realize that was going top corner and Rask has a habit of making really hard saves look really easy.

Tuukka Rask with the SAVE of the Game #NHLBruins pic.twitter.com/oPPK86lDKS

But his most important save of the night came with just under five minutes to play in the third period when Tyler Seguin cut across the slot on his backhand and got Rask to move left to right. Seguin then dropped it for Stars D-man Esa Lindell who rifled one low pad on the left side (where Rask previously was), causing Rask to sprawl out and make a huge save.

With Rask playing as well as he did on Friday night, you have to assume that Head Coach Bruce Cassidy sticks with him for the back-to-back. This is what Rask needs to boost his confidence and propel him through the rest of the season. Even with Friday’s OT-loss, you can start to feel the tide shifting in Rask’s favor.

The Bruins showed plenty of grit on Friday night but too much of it came from the team’s primary sources of offense. The team is sorely missing the injured Zdeno Chara and Kevan Miller as well as the departed Adam McQuaid. If any of those guys were on the ice last night a lot of what transpired – with opponents taking liberties against B’s star players – would not have happened.

The tension began when Stars forward Radek Faksa drilled Patrice Bergeron into the boards six seconds (yes, I counted) after his stick touched the puck. Bergeron went down on all fours and immediately went to the dressing room.

This is as DIRTY as it gets. #GoStars Radek Faksa DRILLS #NHLBruins Patrice Bergeron into the boards well after releasing the puck. Despicable pic.twitter.com/OvcsYlkXUx

Brad Marchand answered the bell, dropping the gloves with Faksa.

Things peaked when in the third period, a 5-on-5 brawl broke out after Faksa got confronted by the Bergeron line. This brawl included bottom pairing D-man Roman Polak dropping the gloves and throwing punches at the diminutive Torey Krug.

Roman Polak got called for roughing on this: gloves off, punches Torey Krug and then the *subtle* kick at the end #NHLBruins #GoStars pic.twitter.com/ANllBz5HKg

Blake Comeau had Brad Marchand pinned down on the ice as he threw punches at his head. The only player on the ice to defend Marchand was Bruins rookie D-man Connor Clifton who took a somewhat passive approach. Clifton acquitted himself later in the game after dropping the gloves and pummeling stars forward Jason Spezza.

Even though it’s his first NHL game, should #NHLBruins Connor Clifton have shown some more intensity to get in the middle of #GoStars Blake Comeau with Brad Marchand on the ice? pic.twitter.com/LXx5IHv0us

The takeaway here is that guys like Krug, Marchand and Bergeron should not be tasked with defending themselves. The Bruins need some more heavies in the lineup or else it’s going to be open season on the B’s skill position players.

If there’s anything positive that can come from this it’s that games with brawls and fights like the one’s Friday night tend to bring teams closer together. Factor in the road trip as well and don’t be surprised if the Bruins go on a winning streak.

The Bruins Offense Didn’t Show Up

The Bruins were shutout for the fourth time this year, as they could only muster 23 shots on goal.

According to Natural Stat Trick, the B’s only had six high-danger chances; the Stars had 16.

Except for a deflected puck off of Danton Heinen’s skate that went just wide of the net with under 40 seconds to play in the third, it felt as though the Bruins never put pressure on Stars goalie Ben Bishop.

The only time Bishop felt anything was when Marchand tapped his leg and Bishop looked as if he’d been shot by a sniper from the balcony.

With Bergeron injured, Marchand seemingly always involved in some sort of scrap and Pastrnak having an off night, Friday was the perfect example of the first line not being able to do it all every game.

Secondary scoring was necessary and aside from a few hard rushes from Jake DeBrusk and a team-high five shots on net from Joakim Nordstrom, the second, third and fourth lines didn’t contribute much.

This secondary scoring issue has been bugging the Bruins since last year’s playoffs and unless they do something about it, it will continue to do so.