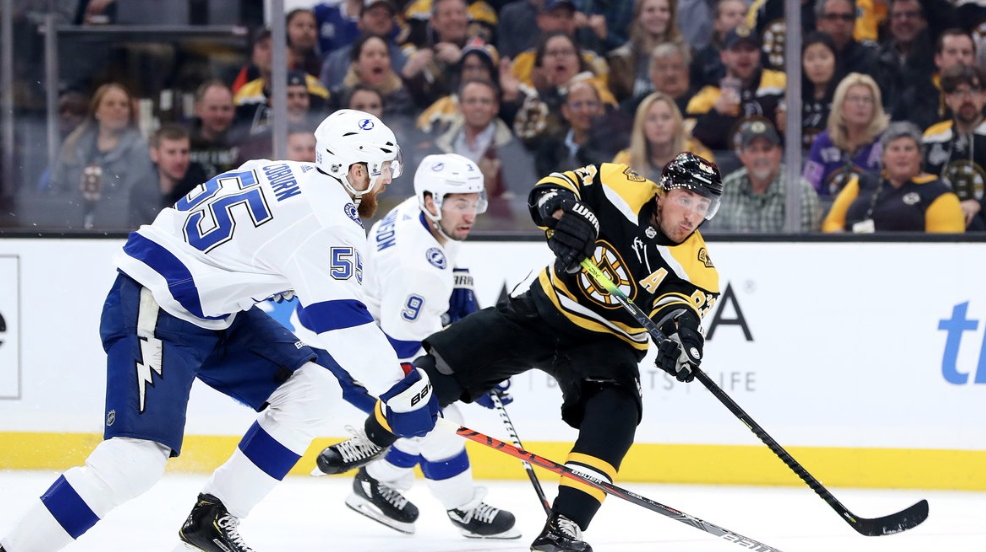 BOSTON – If an early-season matchup of two Eastern Conference powers proved anything Thursday, it’s that everyone should be rooting for the Bruins and Lightning to face each other in a long, drawn-out series.

Boston’s 4-3 shootout loss to Tampa Bay at TD Garden gave an October glimpse into the great drama that the hockey world would love to see in May. Even Bruce Cassidy acknowledged as much on Wednesday when he noted that this week’s gauntlet of Tampa Bay, Toronto (Saturday) and Toronto (next Tuesday) would prove to be an early season measuring stick of sorts.

“There’s parts of the game that were good,” Bruins coach Bruce Cassidy said. “We started defending better as the game went on, not good enough in the first period. Leaky through the middle of the ice off the rush, stuff that we address, we’ll see that Saturday and Tuesday with Toronto. Players are going to have to start identifying that, these strengths, they happened too often tonight, they got through the middle.”

As measuring sticks go, Thursday night’s game against the defending Presidents’ Trophy winner was definitely a mixed bag for the men in black and gold.

But still it carried a fair amount of significance. Tampa Bay, with their 128 points, was the team everyone said the Bruins were lucky to have avoided in the playoffs last spring, after their shocking four-game exit at the hands of Columbus.

The Bruins started this season by doing just enough things right to win five of their first six games. And there’s nothing wrong with that at all. But Thursday night felt like a super-charged bolt of energy fired into an otherwise routine October regular season game.

The Bruins played the contest with an injured David Krejci up in the press box alongside David Backes and Steven Kampfer. Charlie Coyle moved up to the second line with Jake DeBrusk and Brett Ritchie while Par Lindholm centered Danton Heinen and Karson Kuhlman.

The Bruins hadn’t faced much of a test in New Jersey and Anaheim in their first two home games, jumping out quickly against both, surviving shaky second periods and posting wins each time.

They opened the season with a stiff four-game road trip through Dallas, Arizona, Vegas and Colorado. They passed that test with three wins and six out of a possible eight points.

They cruised to routine wins over the Devils and Ducks, with the win over the Ducks carrying a bit more weight with Anaheim’s hot start to the season. Of course, the Bruins didn’t win the game as much as David Pastrnak did with his four-goal spree, providing all of the offense in the 4-2 victory.

But that win cost the Bruins the services of veteran second-line center David Krejci, who left in the second period.

Thursday’s game had a similar start with the Bruins buzzing Tampa goalie Andrei Vasilevskiy, including a left-post ringer off the stick of Brad Marchand. That was followed up moments later by Pastrnak’s fifth straight goal over two games for the Bruins and a 1-0 lead.

Unlike the games against the Devils and the Ducks, the opposition didn’t lie down meekly. Despite a rather mundane 3-2-1 start to the season, Tampa Bay showed the pedigree of a team that won a franchise record 62 games a season ago. They steadily put pressure on the Bruins, causing some sloppiness and turnovers. Marchand had three of Boston’s eight turnovers in the first period and five of his team’s 11 through two periods.

The Lightning had the speed to exploit these mistakes that the Devils and Ducks lacked. How fast? With eight seconds left, Victor Hedman took the puck from behind his net, fed Yanni Gourde in front of the Tampa Bay bench who found a sprinting Brayden Point at full stride and beat Rask over the left shoulder to tie the game and deflate TD Garden at the first intermission. The Bruins relaxed at the wrong time.

“Yeah, that’s a fair word. Pick your word, I mean, when you’re in the last bit of the period, you’ve got to be cognizant of, nobody’s behind you,” Cassidy told me. “It’s just like a Hail Mary, it just can’t happen. We weren’t, and it’s the wrong guy.”

“Right now, our team IQ is a little bit low,” said Torey Krug, in a clear acknowledgement that they’re making some mistakes that aren’t acceptable.

The Bruins scored their second power play goal when Patrice Bergeron scored seven and a half minutes into the second. Tampa Bay again took advantage of superior speed when Alex Killorn and Mathieu Joseph played give-and-take, with Killorn putting a shot on Rask he couldn’t control, and Joseph was on the doorstep to put the puck in the net for a 2-2 game.

The Lightning took a 3-2 lead on a Kevin Shattenkirk goal with 4:47 left. But the Bruins turned to the league’s most potent power play through seven games, as Pastrnak scored with 3:05 remaining, as Anthony Cirelli was serving two minutes for tripping. It seemed only appropriate that the game would come down to a shootout with the Bruins unable to solve Andrei Vasilevskiy while Steven Stamkos beat Tuukka Rask.

The Bruins are still badly lacking scoring depth, something that carried them at key times of the playoffs last spring, like Game 7 against Toronto. Through seven games this season, they have 14 goals from the “Perfection Line” of Pastrnak (8), Marchand (4) and Bergeron (2). The other three lines combined Thursday have three goals. And Zdeno Chara and Torey Krug are the only defensemen to score, each once.

“Now, our power play, as much as it scored, gave up some (short-handed chances), so that’s a different animal we’ve got to be mindful of, managing the puck in certain situations,” Cassidy added. “But five-on-five, a couple of goals there — we just need to be cleaner. Defending the rush. I think every goal — yeah, every goal came off the rush. I think our defensive zone coverage has always been good, our guys are good with structure there, but it’s managing the puck in the neutral zone. On the breakouts, we’re better I thought. And rush goals. It hurts.”

The Bruins are not going to breeze through this season by any means. Everyone knows that there will be challenges from Tampa Bay, Toronto, Florida, Carolina, Pittsburgh, Washington and even Buffalo. The Bruins are a team with elite level scoring and coaching. But as Thursday night revealed, there are plenty of things the team will need to refine between now and the spring to become the team they hope can once again advance farther than the team they played in a regular season game in October.