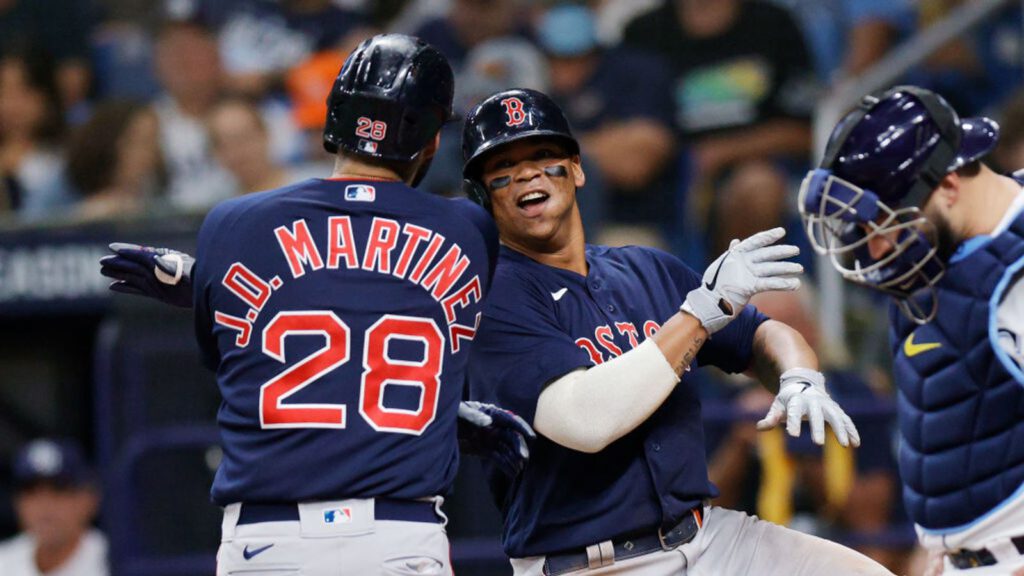 The Red Sox needed a big time pitching performance against the Tampa Rays in Game 2 of the ALDS.

They got one, but not from starter Chris Sale who was pulled after a 5 run first which included a grand slam from Jordan Luplow (who??)

Instead it was Tanner Houck who saved the day and possibly the Red Sox season. The 25 year old right hander came in to start the second and shut down the Rays for the next 5 innings, allowing Boston’s bats to turn a 5-2 1st inning deficit into a 14-6 win and even the best of 5 ALDS series at a game apiece.

Houck was in a word perfect, literally, at least for a while. With an array of hard sinkers and wipeout sliders Houck did not allow a single batter to reach until there were two outs in the 5th inning. In fact Houk retired 30 straight batters over his previous four appearances. Overall Houck pitched  five innings, allowing just one run and striking out five.

“It’s about showing up every day and not taking a day off,” said Houck. It’s easy, I guess, as a reliever to go out there (to the bullpen at the start of the game) and just say, ‘All right, Chris has hit.’ He has it for six innings and kind of mentally shut it off. But being locked in to every pitch, every AB that’s going on, and just supporting your teammates whether they’re hitting, playing the field, or pitching. It’s just a matter of continuing to stay locked into the game and not kind of doze off.”

“He’s been amazing,” gushed Alex Cora. “The fastball, the slider, the splitter — he doesn’t panic. We’ve been using him a lot and we have to be careful with that but today was the perfect day for him to go out there and help to win a ballgame. He just stays in the moment. He doesn’t get ahead of himself or mope around when he gets hit. He just wants to keep going and get people out and what he’s done this week has been amazing. And now, obviously, he is going to be down for a few days, but today was huge for us. It was huge.”

The Red Sox offense came mostly courtesy of the long ball, 5 in all. Back to back solo home runs in the 3rd by Xander Bogaerts and Alex Verdugo cut the Rays lead to 5-4.

Kike Hernandez tied the game up with a solo shot of his own in the 5th inning, one of four extra base hits for Hernandex on the night. Later in the inning, JD Martinez, playing in his first game of the postseason, provided the big blow, a 3 run bomb to dead center giving the Red Sox an 8-5 lead.

“It was definitely a little deflating at first,” Verdugo said. “But I just remember [Cora] is coming up and down the dugout [saying], ‘It’s all right, we got a whole game, eight more innings. Keep going.’ I felt like that really set the tone.”

Rafael Devers hit the Sox 5th and final home run of the night in the 8th, a 2-run blast giving Boston a 5 run cushion 11-6.

Ryan Brasier, Hansel Robles and Robles and Matt Barnes each pitched scoreless innings to preserve the lead and the win as the Sox closed out the Rays 14-6. In total the Red Sox bullpen tossed 8 innings of relief allowing only 4 hits, one run while striking out eleven.

Both teams are off on Saturday with Game 3 being played at Fenway Park Sunday at 4pm. Nathan Eovaldi will pitch for Boston. The Rays have yet to announce their starter. Game 4 is scheduled for Monday at 7pm.