Tatum & Brown Needed to be Called Out; Who Else Was Going to Do it?

Marcus Smart may not be filling out the box score on a nightly basis but he had at least one big assist for the Celtics on Monday Night. 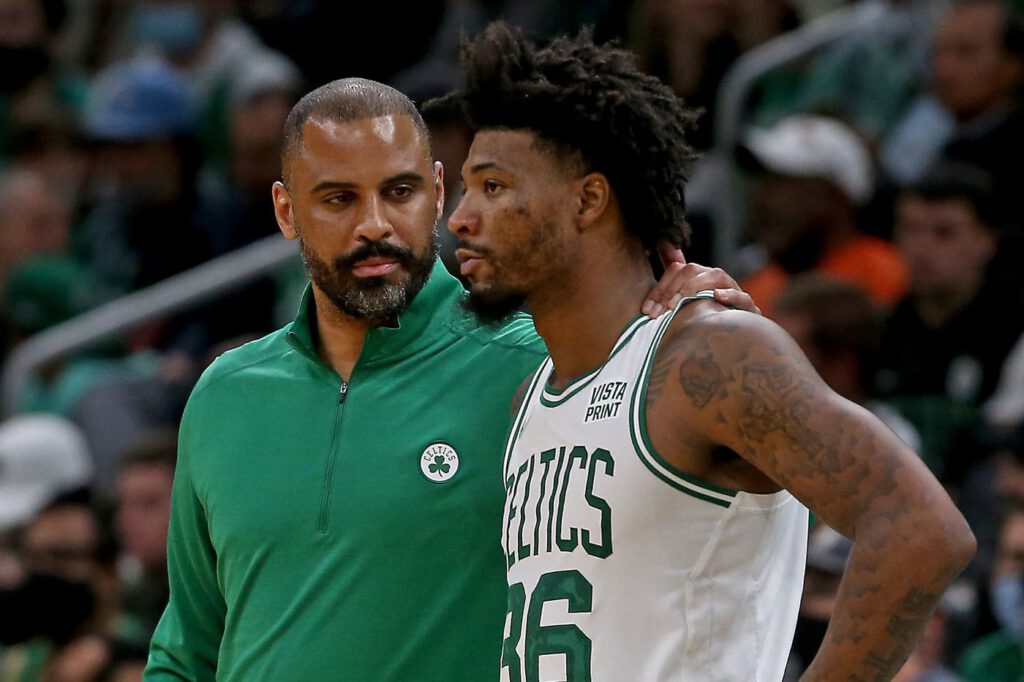 Marcus Smart may be the most polarizing Boston athlete in the last half century.

You either love what he brings on a nightly basis and think his value transcends statistics. Or, you point to his statistics and say “Are you F—ing kidding me???”

There is NO middle ground. If Smart were a prize fighter his career record – in the eyes of Celtics fans – would be 0-0 with 455 split decisions.

So naturally, when Smart unloaded on the team’s two star players Jayson Tatum and Jaylen Brown for not passing more in a devastating and humiliating come from behind loss to the Chicago Bulls on Monday night, reaction was, well…mixed.

And the debate that will occupy airwaves and the twittersphere today and into the future will focus on two questions.

Is Smart right, and was he the right man to deliver the message?

The answer is absolutely yes, and does it really matter?

Sure, the Celtics ‘point guard’ had (checks box score) zero assists on Monday night. Wait, ZERO?? And yes he was also shooting only 25% FG on the season entering the game, which begs the question, did he want the Jays to pass the ball to him?

It takes a certain sized pair of you know what to say what Smart said considering how bad he has been on the offensive end this season. Smart is not the point guard the Celtics envisioned he would be when they handed him the reigns this offseason. Any criticism sent his way for the team’s 2-5 start is well earned.

But somebody had to say it.

“Every team knows we are trying to go to Jayson and Jaylen, and every team is programmed and studied to stop Jayson and Jaylen. I think everybody’s scouting report is to make those guys try to pass the ball. They don’t want to pass the ball and that’s something that they’re going to learn,” Smart said. “They are going to have to make another step and find ways to not only create for themselves but create for others on this team, to open up the court for them later in the game where they don’t always have to take those tough shots or take tough matchups when they do get the 1-on-1 and see a trap.”

Show me where he’s wrong.

The Celtics offense grinds to a halt late in game because EVERYONE knows the ball is going to Tatum or Brown and everyone knows they’re not giving it up. For all their considerable talents, 1 on 5 Basketball is a losing proposition. It’s not criticism so much as it is basic math.

It happened again Monday night (way more Tatum than Brown who had only 2 shots in the ill fated 4th.) The Celtics offense, once again devolved into a ton of isolation. Tatum in particular made a series of poor decisions with the ball in his hands and defenders all around him. Ugly offense translated into bad effort on defense. The Bulls seized on it, outscoring Boston 39-11 in the 4th quarter (51-18 going back to 2:23 left in the 3rd.) And that’s how a 19 pt lead becomes a 14 point  loss.

This issue, however is not new and Smart is not the first to say it. Brad Stevens tried desperately to convince his team that they were the “best version of themselves” when they shared the rock. Ime Udoka pointed at the team’s pitiful assist rate as a major Day 1 point of emphasis. Opponents have said before they know what’s coming and have criticized the Celtics young stars for not making their teammates better. Heck, 18,000 plus fans at the TD Garden voiced their disapproval for the Celtics style of play when they booed the green team off the floor at the end of the game.

Tatum and Brown are great individual talents, but they’re far from the players they need to be to get the Celtics back to contention. They aren’t 19 anymore so it’s ok to take off the kid gloves. They’ve had plenty of adulation heaped on them since entering the league, they can handle a little criticism too. When you are the stars you are held to a higher standard.

As for Smart, no one has ever accused him of being the team’s best player nor has that been a requisite for the leadership they’ve asked him to deliver in the past. He’s been called the heart and soul of the Celtics by his teammates and he didn’t earn that title because of his field goal percentage. If he was the wrong messenger last night then he’s never been the right one.

He’s the captain without the C.

He acts like a leader even though he’s already been suspended this season for missing a flight.

He’s a point guard who occasionally dishes out no assists.

It’s all part of the Marcus Smart experience. Say what you will, Smart doesn’t care. Even if he does, he’s not going to change. His entire career, Smart’s value and contributions don’t always show up in the box score (certainly not this season.)

But if his message to Tatum and Brown hits home and affects change for the better, you can pencil him in for at least one assist last night.