The Boston Celtics traded baskets all night against a shorthanded Miami Heat squad, but pulled away to win 134-121. 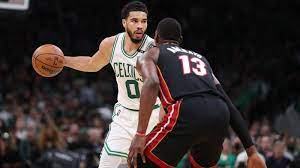 Some nights, a team needs their superstar to play like it to overcome some deficiencies. Jayson Tatum answered the call as M-V-P chants showered the Garden.

The Boston Celtics traded baskets all night against a shorthanded Miami Heat squad, but pulled away to win 134-121 thanks to a season-high 49 points from Tatum. Boston improved to 5-0 on this home stand and 18-4 on the year with the win.

Tatum dominated throughout the game, scoring from all three levels efficiently, as he finished shooting 8-for-12 on 3 point shots and 11-for-12 at the free throw line en route to a game high +29 point differential. Jaylen Brown and Marcus Smart combined for 47 points as the trio helped the Celtics eclipse 130 points in three consecutive games for the first time since 1968.

The Celtics continued to bludgeon defenses as they are now shooting 50 FG%/41 3PT%/86 FT% as a team this season. Should those numbers hold, they would collectively be a record.

Boston is an unstoppable, offensive juggernaut and tonight the Heat were the latest victim.

The Celtics will look to win the series against Miami and finish the home stand perfect on Friday before beginning a season-long 6-game road trip Sunday at Brooklyn.