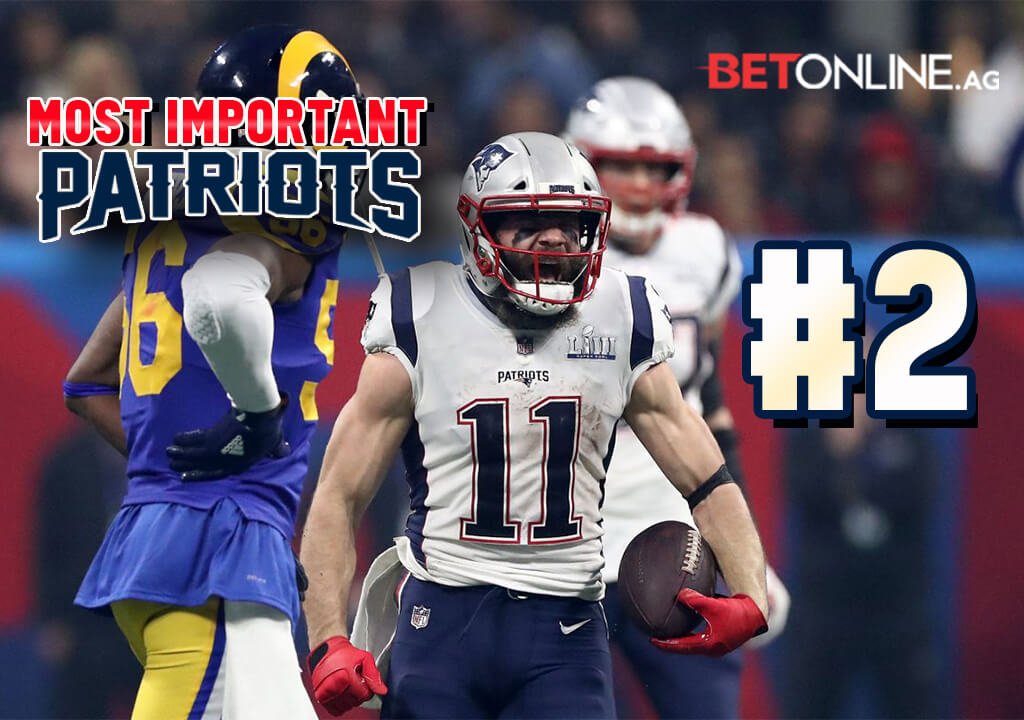 Edelman’s 1.09 net yards over average per play ranked second on the team a year ago as he solidified himself as the engine of the New England offense in a post-Gronk world.

The fiery 33-year-old is an explosive playmaker that led the Patriots with 19 catches of 20 or more yards (including playoffs) and was dynamite for New England on third down a year ago.

The Brady-to-Edelman connection generated 17 third-down conversions to go with a 120.1 passer rating on the money down, both of which either tied or led the team.

And as you’d expect, Edelman averaged a stellar 1.88 yards per route run out of the slot (8th in NFL) with that number climbing to a ridiculous 3.46 in the postseason.

Before we get to his record-setting playoff run, let’s go back to the final week of the regular season.

Edelman’s 435 receiving yards on crossing routes led the league in 2018 as the Patriots found multiple ways to get him the ball in the middle of the field.

Edelman beats Jets corner Buster Skrine here out of the right slot. The Pats receiver is terrific at fighting off contact at the top of routes by being the more physical player. Edelman gains ground in his stem attacking Skrine’s inside shoulder and stepping on the toes of the Jets corner. Skrine goes to jam Edelman at the top of the route, but Edelman leans into the contact before snapping the route off and holding the angle as he runs across the middle. Teach tape on how to run a ten-yard crosser out of the slot.

As we alluded to earlier, Edelman’s 388 receiving yards in the postseason were the seventh-most in a single postseason in NFL history.

What makes the Patriots and the “squirrel” such a great match is how Edelman’s skill set fits with the motion-heavy New England offense.

Edelman’s versatility allows Josh McDaniels to move him around the formation and have him run routes from different alignments, which makes it difficult for teams to jam the Pats receiver at the line of scrimmage.

Here, Edelman motions into a stack alignment with Phillip Dorsett at the bottom of the screen. The stack helps Edelman get a free release at the line of scrimmage and allows the two receivers to work off of one another. This time, Dorsett sets a little pick on Edelman’s man giving his teammate a step of space on his release, and that’s all Edelman needs to beat Chiefs corner Charvarius Ward for a first down on another crossing pattern.

In the Super Bowl, Edelman caught passes on five different Rams defenders en route to his 141 yards on ten receptions as the LA defense did not have an answer for him.

On this play, Rams slot corner Nickell Robey-Coleman fell victim to Edelman’s terrific route running. Edelman uses a stutter release to freeze Robey-Coleman just long enough to gain inside leverage when he opens up his strides. Edelman then leans into Robey-Coleman and maintains a two-way go (ability to break in either direction), but his hand usage is another detail that separates Edelman from others. The Pats receiver gets his inside hand into the body of the Rams corner and then rips his arm through to disengage from Robey-Coleman.

Edelman wins consistently with his footwork, hand usage and change of direction skills in his breaks and after the catch.

And he also adds value as a ball carrier on sweeps and end arounds, a blocker in the running game and of course as a return man on punts.

For the Patriots or any team, few players do more on the football field than Julian Edelman.

And his intensity and all-out effort are what being a Patriot is all about.