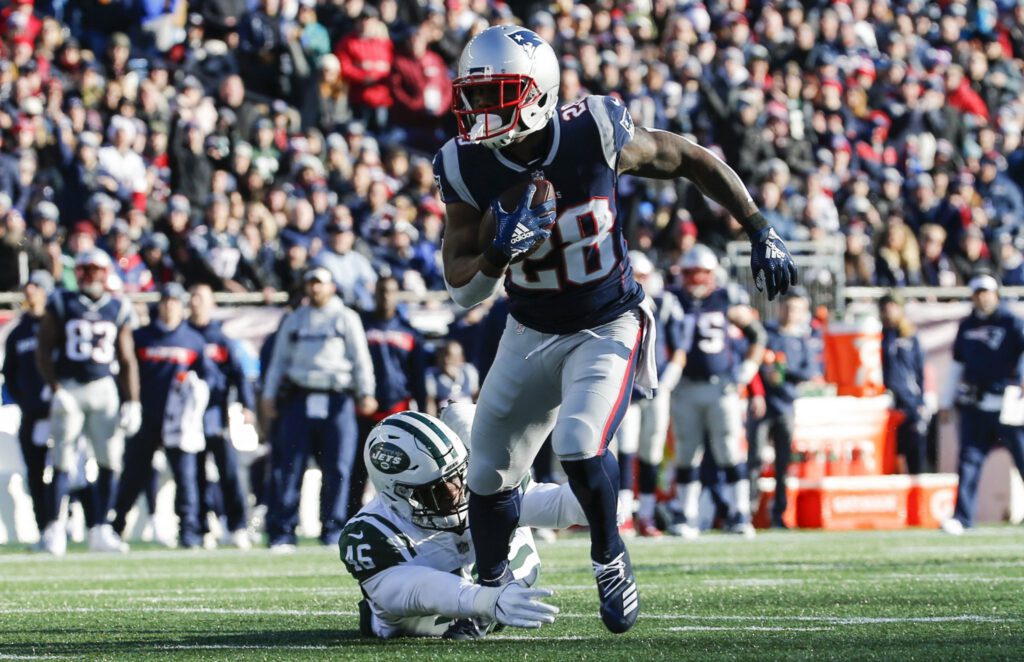 Number five, James White: before the analytics crowd gets on me for putting a running back in my top five, consider the impact that James White has on New England’s passing attack.

White’s 751 receiving yards were the second-most by a running back in 2018, and 665 of those yards came after catch (fourth-most in NFL among all receivers).

He also led the Patriots with 12 total touchdowns and 13 third-down conversions.

With Rob Gronkowski retired, White is the biggest matchup problem the Patriots have outside of Julian Edelman on offense. The Pats running back is instrumental in providing easier throws for Tom Brady on third downs and in the red zone, which makes him extremely important to the 2019 team.

The Patriots get White involved in the passing game in multiple ways like screens and aligned out wide or in the slot (17 percent of snaps in 2018).

But he does most of his damage on routes out of the backfield where the coaching staff gets him one-on-one with a linebacker.

Here’s a great example from the Patriots’ regular-season finale victory over the Jets. The Pats find themselves in need of another shot play from just inside the red zone (NYJ 17). Instead of throwing it over the top, they decide to clear out the underneath area of the field for White by running a four verticals concept from a three-by-one set. They catch the Jets in man coverage, and with the defensive backs downfield with the verticals, it leaves White on an island with the linebacker. White makes a nasty cut on an angle route and scampers into the end zone for the score.

As mentioned above, the Patriots will also flex White out wide to get him isolated in coverage.

On this play, the Patriots were in an empty set with White on the linebacker at the bottom of the screen. The Pats ran a basic route combination called slant-flat. Here, Dorsett runs the flat route from the slot, and White cuts his slant right in front of Dorsett’s man making a little bit of contact to create space for himself. The linebacker is playing off to protect against a vertical route, and White and the Patriots have an easy first down.

Along with his production, White’s teammates and coaches gushed all last season about his professional approach, which explains why he was a team captain.

The Pats running back sets an example of consistency and reliability, and people in the building are in awe of his ability to avoid making mistakes.

The running back value question is one for another day, but White’s skill and mistake-free brand of football is what it’s all about in New England.

Bonus: here’s a James White highlight reel of all the ankle-breaking moves from last season.