Ten Things We Learned From Patriots 10-3 Win Over Panthers 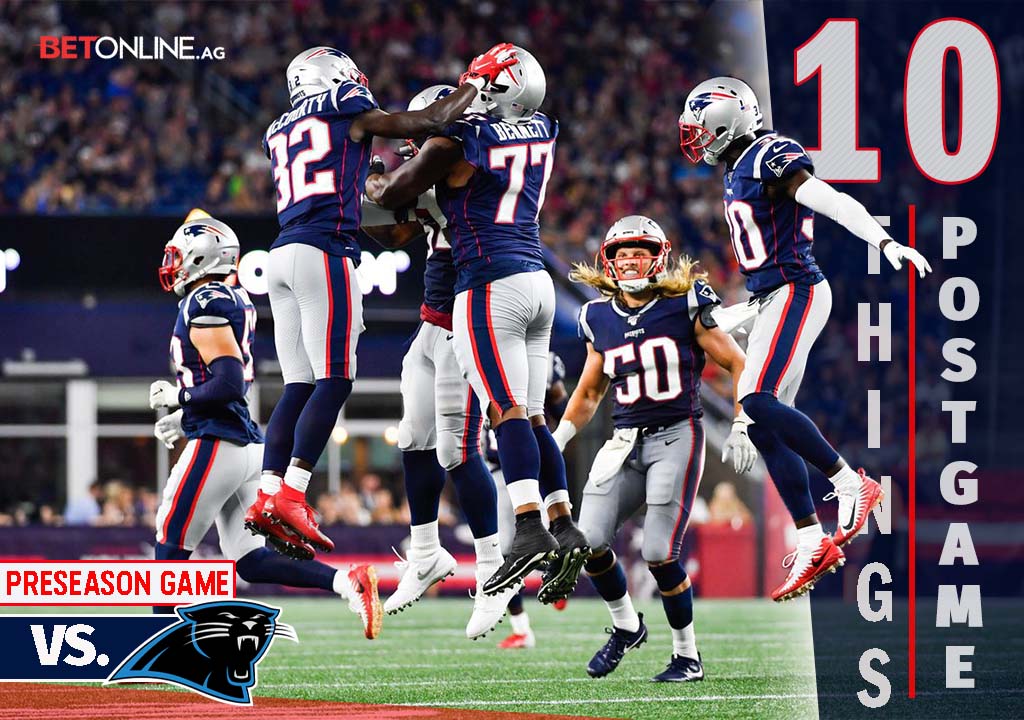 FOXBORO — The Patriots remained undefeated in the preseason with a 10-3 victory over the Carolina Panthers at Gillette Stadium on Thursday night.

The Patriots’ starters saw extended action with Tom Brady leading the offense for three series in the first half and the starting defense playing the first two quarters.

The win did not come without a cost, however, as several players left Thursday night’s game early due to injury.

King was carted off in the second quarter and based on on-field reactions could miss extended time.

And the injuries to Watson, Anderson and Kendricks present serious questions for New England’s depth at tight end, although Watson will miss the first four games regardless.

Without further ado, here are ten things we learned from the Patriots’ third victory of the preseason:

1. Brady’s Back, That’s Your Quarterback

Tom Brady continues to look closer to 32 than 42-years-old on the football field. Brady’s chemistry with some of his new receivers, such as rookie Jakobi Meyers, is as expected, a work in progress. But the six-time Super Bowl champ was very sharp. On initial viewing, Brady made all the correct decisions with the ball and gunned some lasers in that 15 to 20-yard range as we are accustomed to seeing. Here are two of Brady’s best throws from Thursday night:

On the first one, the Panthers were in a cover-3 structure with the corners playing off on the outside. Brady read the middle of the field out, first looking to Jakobi Meyers on a crosser. Panthers linebacker Luke Keuchly dropped underneath Meyers’s route forcing Brady to find another target. As he began to shift his weight to look outside to Phillip Dorsett, Shaq Mason lost his block on the interior. Brady got hit as he threw, preventing him from fully stepping into it, and still drove the ball 19 yards on a line to the boundary.

Next, Brady threw an absolute dart up the seam to tight end Ryan Izzo. Izzo had a seam route the entire way, and Brady fit the ball in as the safety collapsed on the second-year tight end.

“Allow him to reintroduce himself…” that ain’t a 42-year-old quarterback. Is it?

The Patriots’ starting defense thoroughly dominated against Carolina holding the Panthers to two total first downs in the first half. Although Cam Newton exited early, the starting secondary is going to make it difficult on any quarterback this season. A group made up of Stephon Gilmore, Devin McCourty, Jason McCourty, Jon Jones, JC Jackson, Terrence Brooks and Duron Harmon were terrific to watch.

On this second-quarter sack of Newton, the Panthers motioned into a condensed alignment to Newton’s right with Jarius Wright and tight end Greg Olsen in a near-stack. Gilmore ran across with Wright, Devin McCourty and Duron Harmon perfectly bracketed Olsen, and the Patriots got great coverage from Jackson and Jones on the backside. The Patriots also brought pressure blitzing both Jason McCourty and Terrence Brooks, but the coverage led to the sack.

The marriage between rush and coverage held the Panthers to three points and 99 net yards on the night.

After Brady, Patriots rookie quarterback Jarrett Stidham played the final 37 minutes with veteran Brian Hoyer on the bench. Patriots head coach Bill Belichick said to not look into the decision to sit Hoyer, saying the team wanted an extended look at the rookie. Like many of the younger players that we saw, Stidham’s lack of experience showed with some of the decisions he made with the football; rookie mistakes if you will.

One of the big ones came on a second-quarter pass attempt to Jakobi Meyers. The Panthers were in a single-high coverage, and Stidham dangerously threw an interceptable pass intended for Meyers. In the postgame locker room, Stidham told me that he saw the boundary corner breaking on the ball, and instead, should’ve thrown it to the tight end in the flat. A good lesson that not every play needs to go for a touchdown, sometimes the best decision is to check it down and live to play another down.

On a positive note, Stidham’s pocket movement, which still needs some tinkering, has improved leaps and bounds from his college days.

Here, Stidham feels the edge pressure coming off the left side and slides up in the pocket to deliver a catchable ball to Meyers. The rookie has shown above-average poise in the pocket with pressure around him.

Then, there’s the arm talent, on full display with this dart to Meyers over the middle.

The fourth-round pick needs to improve his decision making and take better care of the football, but those are things that will hopefully come with more experience.

As we expected, 2018 first-round pick Isaiah Wynn took the field with the starting offensive line at left tackle, and the second-year pro held up well. Wynn’s footwork, balance and upper body strength are off the charts. He’s able to move people and hold up rushers by landing accurate punches to the chest with absolute force, and once he gets his hands on you, it’s over. Wynn did blow a block early in the game on a screen pass to Dorsett, but the Patriots are in good hands with him protecting Brady’s blindside.

We got our first look of second-year running back Sony Michel in Thursday’s win, and Michel ran well on his ten carries. The Pats running back had great burst and footwork turning some negative plays into positive runs as well as medium gains into big ones.

On his 30-yard run that was called back, the Patriots ran one of their staples: an isolation play with fullback James Develin leading the way. The Pats have center David Andrews and right guard Shaq Mason double the nose tackle with the rest of the OL fanning out their blocks. That gives Develin a clean run at middle linebacker Luke Keuchly. Michel does an excellent job of setting up Develin’s block, staying behind the double team forcing Kuechly into a spot where Develin can pin him down. Michel then cuts off Develin’s block and explodes into the secondary, making the safety miss in the open field.

The Patriots were hoping for a more explosive Michel in year two, and the early returns are positive.

After the additions of Josh Gordon and Demaryius Thomas, some theorized that Phillip Dorsett might be on the outside looking in. Based on Thursday night, that seems unlikely. Dorsett caught all five of his targets from Brady and two more from Stidham, but it was the chemistry with Brady that stood out. Here’s Brady’s 19-yard completion in the words of the Pats wide receiver:

“I think I have a good understanding of the offense and how he [Tom Brady] wants routes to run and what he wants me to do on certain plays… That was one play that I knew where he wanted me to be, so he really doesn’t need to know exactly where I’m at, he was under pressure and just threw it. He knew where I was going to be on that one. That’s the good thing about him and me… it’s not quite on Julian’s level, but it’s getting there.”

The growing chemistry between Brady and Dorsett suggests that his spot is safe on the roster.

The breakout player of training camp, undrafted rookie Jakobi Meyers took his struggles in stride. Meyers had a drop, a hold (suspect call) and stopped running his route on one play. The rookie acknowledged that the speed of the Panthers starting defense was up a level compared to the rest of the competition he faced in the first two preseason games.

On the route where he stopped running, the Panthers were in a cover-2 scheme with the boundary corner sitting at ten yards and safety Eric Reid rotating over the top as a half-field safety. Meyers should’ve continued on the go route and probably would’ve had a big play if he did. He had a step on Reid before he shut it down.

In my eyes, Meyers is still a near-lock to make this team. Chalk this up to a learning experience for the rookie. We don’t need to make a major deal out of this.

Along with Meyers, rookie third-round pick Chase Winovich ran with the starters on Thursday night after two terrific preseason games. Winovich was used as the Patriots’ top weak-side edge rusher, which is where he played in the first two games as well. Although he wasn’t as dominant, Winovich held his own against the Panthers’ starting offensive line. Winovich should be in the mix this season as a situational pass rusher or in certain lighter fronts when the Patriots go to those looks. Both the rookie from Michigan and Meyers got some much-needed reps against starting-level competition against Carolina.

On my last roster projection, I had veteran Lance Kendricks making the team as an in-line blocker. My thought of two tight ends might’ve been right, but I had the wrong blocker if Thursday night was any indication. 2018 seventh-round pick Ryan Izzo ran with the starters as the primary tight end, blocking well and catching the seam bullet from Brady. Izzo, who spent last year on injured reserve, said that the year off was huge for his development. He spent the season in his playbook and the weight room, and his redshirt season seems to be paying off.

We’ll have to review the tape to get a good read, but free-agent addition Mike Pennel is battling for a roster spot. Pennel played late into the second half, seemingly passed over by nose tackle Danny Shelton and rookie Byron Cowart. Pennel had an excellent season for the Jets a year ago, but it might not be clicking here in New England. Plus, the Patriots might be looking for more of a penetrating nose tackle this season, which isn’t Pennel’s game.

We also keep seeing some grown-man strength from Byron Cowart on the defensive line.