Ten Things We Learned From Patriots’ Blowout Win Over Steelers 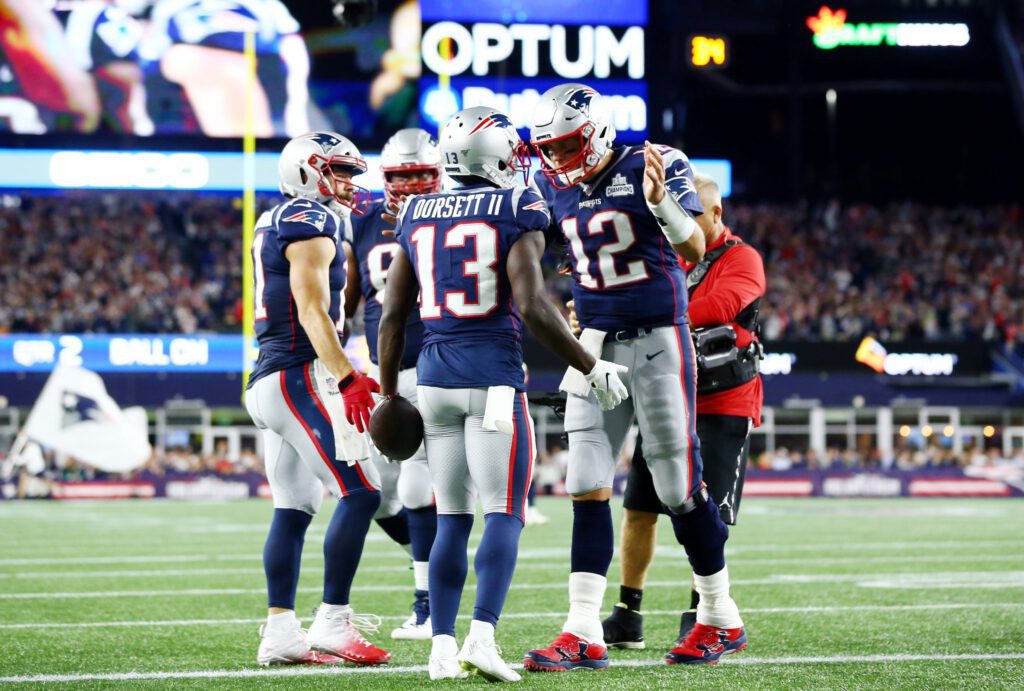 FOXBORO — the Pittsburgh Steelers did what they do, and so did the Patriots, dominating Ben Roethlisberger and company to open the season with a 33-3 win.

Last December, Steelers head coach Mike Tomlin and his staff put together a great plan to stifle the Patriots with bracket coverage on their top weapons and a nifty zone rollback counter to their staple rushing concepts.

But on Sunday night at Gillette Stadium, the Steelers eventually went back to their losing plan with soft zones and Big Ben in the shotgun throwing vertically against man coverage.

Over the last four home games between these two teams, the Patriots are a plus-80 with a combined score of 152-72.

After hanging 33 points on Pittsburgh, just think what this offense will do when Antonio Brown is out there in the coming weeks.

Although it was a party on banner night, the Patriots did suffer a potentially significant loss with right tackle Marcus Cannon leaving the game in the fourth quarter. Cannon suffered a shoulder injury in the win and had his arm in a sling after the game. We’ll monitor his status.

Cannon’s injury put a damper on an extremely positive night, so here are ten things we learned from a season-opening victory for the Patriots (h/t @ftbeard_17 for the highlights):

1. “Allow me to reintroduce myself…”

Let’s start with Brady, who began his 20th NFL season by throwing for 341 yards on 36 attempts and three touchdowns. For those keeping score at home, that’s an average of 9.5 yards per pass attempt. The Steelers played some man early, but it was mostly zone and zone blitzes, which Brady shredded. Before the game got out of hand, Brady was 7-for-9 with 111 yards and two touchdowns against the Steelers blitzes. Let’s break down a few Brady throws.

The first one is a 25-yard rocket to Phillip Dorsett for a touchdown. Dorsett told me, “I feel like he [the safety] jumped Josh [Gordon] on the in-cut coming in, and I knew Tom was going to see it. He laid up a great ball, and I just had to run up under it.”

On the play, you can see exactly what Dorsett described with Gordon. Steelers safety Terell Edmunds went to jump Gordon’s route leaving Dorsett’s man without inside help. At that point, Dorsett said his job is to split the two defenders and catch the ball. Brady throws a rocket, and the Pats go up 17-0.

Later on, Brady completed his longest throw of the night in terms of air yards to Josh Gordon.

We’ll get to Gordon’s route later on, but the throw from Brady was also a beauty. The Steelers were in a quarters zone structure with two safeties splitting the middle of the field. Gordon, who had a linebacker on him at the line of scrimmage, blows through the defense, and Brady splits the safeties with an excellent throw. Not bad for a dink-and-dunk QB.

If the rest of the league was hoping to see Brady show his age, he didn’t on Sunday night.

2. Patriots Secondary With a Near-Perfect Performance

Save on deep completion to James Washington; the Patriots secondary thoroughly dominated the new-look Steelers passing attack without Antonio Brown. For the Pats DBs, it’s all about preparation and playing together on a string.

“What it comes down to is everyone doing their job,” safety Patrick Chung said. “Once one person becomes selfish, that’s when we give up big plays. We are playing together, and hopefully, we can do that for the remainder of the season.”

Remember back to Stephon Gilmore’s first season when bunch formations gave the Patriots problems in the first month? Well, that’s no longer the case, and all Chung would tell me is that the group works on those formations every single day in practice.

Here’s a great example of how far this group has come. The Steelers are in a reduced bunch in tight to the formation on the goal line. The Patriots play the bunch with inside-out principles. The defender and receiver on the line of scrimmage are locked, which means Jason McCourty is in man coverage. But the two other receivers are zoned by the other two defensive backs with Chung taking the first out and Jon Jones the first into the defense. The Patriots played it perfectly, and Big Ben throws incomplete.

Speaking of Jones, he had two pass breakups letting us all know why he got that well-deserved contract extension.

Jones walked me through one of his breakups saying, “we rep those in practice from one-on-ones to drills; play through the play and fight every down until the whistle blows.”

On the play, it looks like Steelers rookie Diontae Johnson has a reception, but Jones punched the ball out of his hands to break up the pass. The Pats got an excellent, four-down player with Jones.

3. Stephon Gilmore Picks Up Where He Left Off vs JuJu Smith-Schuster

With Antonio Brown out of the picture, Stephon Gilmore shadowed Steelers Pro Bowler JuJu Smith-Schuster for the majority of the game. In the Steelers locker room, JuJu said, “what a great player” when asked about Gilmore. In the Pats locker room, I asked Gilmore about his strategy tonight against JuJu:

Yes, Smith-Schuster did see some bracket coverage and ultimately caught six balls for 78 yards. But Gilmore limited his overall impact and didn’t let him take over the game.

If you had any doubts about Isaiah Wynn, Sunday night’s performance put them to bed. Wynn erased Steelers pass rusher Bud Dupree from the game. He nearly pitched a shutout on Tom Brady’s blindside allowing only one quarterback pressure on initial viewing. Wynn also played the entire way, which means conditioning isn’t an issue either.

As the montage above shows, Wynn’s feet are impeccable, hitting his landmarks with effortless change of direction and explosiveness. He’s also tough to run through and does an excellent job of fighting for hand-positioning to keep himself centered and anchored on his man.

The Patriots had some issues with interior pressure and TJ Watt on the other side, but Wynn had a great debut. The Pats are set at left tackle for a long time if he can stay healthy.

5. Josh Gordon is More Than a Physical Marvel

With Josh Gordon, we all know about the physical gifts. He’s fast, strong and physically imposing with his size. But he doesn’t get enough credit for his abilities as a route runner.

On his 44-yard catch, Gordon’s route running skills were on full display. Gordon knows he has a linebacker underneath him and safety Kameron Kelly widening into a two-deep structure. As he approaches Kelly, Gordon angles his route at Kelly’s outside hip and sells an outside break by turning his head in that direction. Once Kelly bites, Gordon breaks inside on a seam pattern to split the two-deep coverage. Look at Kelly spin like a top trying to keep up. Gordon’s route and eyes into his break, combined with a good throw, led to the long completion.

The Patriots primarily played out of either 20 (3 WR, 1 RB, 1 FB) and 21 personnel (2 WR, 1 RB, 1 FB, 1 TE) sets but also incorporated some of their “pony” packages with James White and Rex Burkhead on the field at the same time. If the players on your team can handle it, the personnel shuffling gives you an advantage over opposing defenses.

“It’s a lot, but it’s something that we are used to,” Dorsett told me. “It just comes with study habits. Going in, knowing the game plan inside and out. Knowing all the positions because it’s football, you never know what could happen, so you might have to play this position or that position. It’s definitely a lot, but it kind of messes up defenses sometimes because they have a lot of stuff thrown at them, and sometimes they don’t know how to match it.”

It’s safe to say that McDaniels messed with Steelers DC Keith Butler’s head on Sunday night with his barrage of different personnel packages.

Lost in the euphoria of the Antonio Brown signing was that A. someone needs to go to make room for him on the roster and B. it means fewer snaps for someone at wide receiver. Well, if the answer to B is Phillip Dorsett, it’s a shame, because all he has done is produce.

Dating back to 2018, Brady and Dorsett have connected on 19 consecutive passes during the regular season with three of those going for touchdowns. For reference, a perfect passer rating is 158.3.

Last season, the Steelers ran all over the Patriots for 158 yards on 6.3 yards per rush. Even when the game was close, the Patriots shut down Pittsburgh’s rushing attack allowing only 22 yards on ten carries in the first half. One of the plays that killed the Patriots a year ago was a zone rollback toss, designed to cut across the grain of the defense.

“Seeing it on film, those were big plays they hit on us last year, and we adapted,” Lawrence Guy said. “We came at it from a different perspective of if it does happen, how we want to eliminate it. Not trying to jump gaps and play patient.”

The Patriots made the necessary adjustments to play the zone rollback better this time around, and as a result, the Steelers’ typically potent rushing attack was a non-factor.

Early on in the game, the Patriots ran a series of crossing patterns over the middle of the field that gave the Pittsburgh defense trouble. The Pats ran their variations of the mesh concept on many of them, a staple play in the NFL nowadays.

Here’s a nifty adjustment to the mesh concept by McDaniels. The Pats go empty out of 11 personnel with Rex Burkhead on the perimeter. Burkhead motions closer to the formation, which allows tight end Ryan Izzo to pick his man at the line of scrimmage. The mesh part is Burkhead crossing over the middle with Gordon, but the pick play and motion was great stuff by the Pats OC.

Gordon’s touchdown catch later in the drive came on a similar mesh-style concept where the slot corner blitzes and nobody picks up Gordon coming across.

The Steelers defense did play some man coverage in the first half, but the Patriots exposed it with unique formations and by causing traffic over the middle, forcing them into zone coverages.

Lastly, the Patriots played their first game without starting center David Andrews, and Ted Karras had an interesting day. On social media, many of you noted that Karras’s shotgun snaps weren’t pretty, but the Pats center said nobody on the team mentioned it to him. Other than the snaps, Karras was mostly clean against an outstanding interior pass-rushing team in Pittsburgh. Pro Bowler Cameron Hayward got into Brady’s lap once or twice, but overall, it was business as usual for the Pats offense with Karras at center.