Patriots vs Giants: Ten Things We Learned From the Patriots Preseason Finale 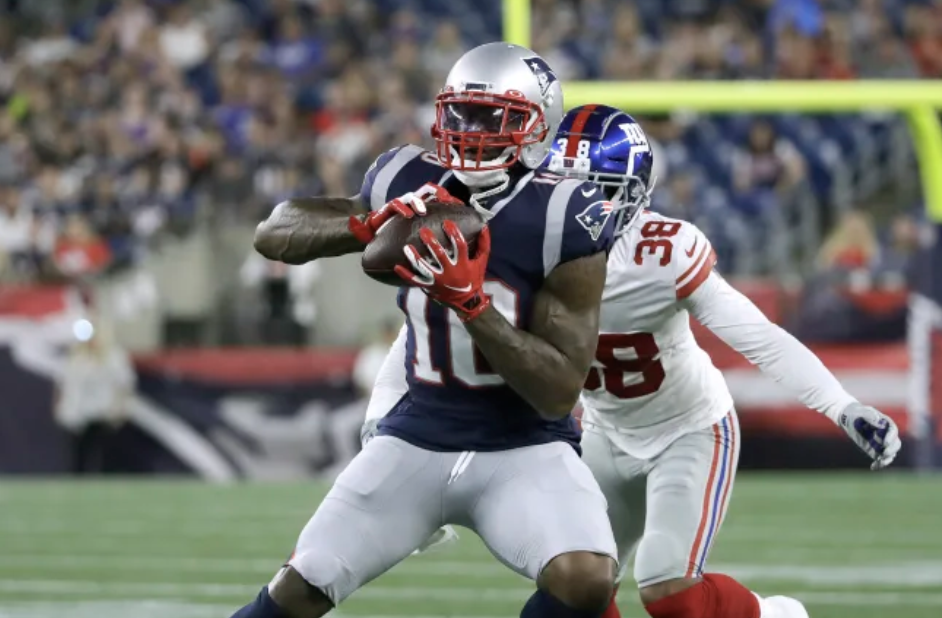 FOXBORO — The Patriots failed to complete the perfect preseason falling to the New York Giants 31-29 on a last-second touchdown pass at Gillette Stadium on Thursday night.

At one point, the Patriots lined up fullback Jakob Johnson (defensive end) and wide receiver Gunner Olzenski (cornerback) on defense.

In all likelihood, only a few players that took the field will make the initial roster, and the team made many of those roster decisions before Thursday night.

For the last time in the preseason, here are ten things we learned from the Patriots’ loss to the Giants:

When the Patriots took the field for warmups, it was clear from the outset that Julian Edelman was playing in this one. In a scary moment, Edelman appeared to aggravate the same thumb that forced him to miss training camp. But reading his body language on the sideline, I’m hopeful that he avoided re-injury.

The reigning Super Bowl MVP reintroduced himself with one of his patented crossing patterns. Edelman is terrific at attacking leverages in his stems. He holds the route for as long as possible back into the defender, getting a step beyond the DB’s coverage and then keeps the angle across the middle of the field.

On one play, we all held our collective breaths for Edelman’s health and saw that the 33-year-old is ready for the regular season.

Earlier in the week, the former Pro Bowler told us that he can “still go” and feels his explosiveness returning to an acceptable level. Both Thomas and Josh Gordon went up against guys that were in the AAF and CFL not too long ago, and likely won’t make the Giants roster. But the veteran wideout had enough juice to garner some optimism, even if he wasn’t running by anyone. Other than how he was moving, I wanted to see if Thomas could beat defenders with the little things, and he did that, which means more to me than anything.

The touchdown from Stidham was a great adjustment by Thomas, but this little slant gives me some hope for Thomas in this offense. He wins with body positioning and strong hands to secure a catch with the defender draped all over him, something he needs to do at this stage of his career.

I had Thomas on my initial 53-man roster before tonight; his seven catches for 87 yards and two touchdowns make that a foregone conclusion.

Stidham was only two-for-six targeting Josh Gordon on the day, but the Pats receiver flashed with 30 yards and a drawn pass interference call that tacked on another 35. Gordon had the same explosiveness in his routes as last season running mostly slants, seams, go routes, digs and curls. The Patriots also moved Gordon around the formation with him logging snaps at left, right and slot receiver.

Gordon’s 19-yard reception in the first quarters exemplifies his strength and underrated route-running skills. Giants corner Henre’ Tolliver has Gordon in man coverage on the boundary. The Pats wideout ran a stop fade where he’s going to come off the line like he’s running vertical, read the DBs coverage and either stop or continue depending on Tolliver’s positioning. In this case, Tolliver keeps up with Gordon on his release, so the Pats receiver stops his route. Then, you see the strength to shake off the tackle and pick up a few yards after the catch.

The Patriots finally lucked out on a league matter with Gordon avoiding another suspension. Adding him into the mix brings explosive plays through the air, which they needed in the wake of Rob Gronkowski’s retirement.

Thursday night’s loss will hopefully be the last time we’ll see rookie quarterback Jarrett Stidham this season. Stidham made several positive plays in the preseason, signifying that the Patriots might’ve found something in the fourth-round pick. However, he still has a ways to go when it comes to the mental aspects of the game. Stidham’s decision making can be erratic, and he was slow getting through his progressions at times on Thursday night.

Stidham’s answer, along with Belichick’s responses about his playing time, tells us why he has seen the field over Brian Hoyer the last few weeks; he needs the reps.

The arm talent and control on the football is there for the rookie, and he showed off his downfield accuracy on a 35-yard touchdown to Demaryius Thomas.

On the play, Stidham aggressively attacked man-to-man coverage on the outside with Thomas running a fade up the right sideline. The veteran receiver and Stidham duped the corner into thinking the ball was coming over the top. Then, the rookie QB purposefully underthrew the pass so Thomas could adjust back to the ball for the score. Pulling the string on a downfield throw like that isn’t easy.

Stidham can make every shot necessary within the framework of the Patriots offense. He just needs time behind Tom Brady to conquer the mental side of the game.

There was some uneasiness about the field goal operation coming into Thursday night. Gostkowski hasn’t looked sharp missing three field goals in the first three preseason games, and new punter Jake Bailey was a little shaky on the holds as well. Gostkowski was good from 31, 40 and 51 yards against the Giants on Thursday night. It looks like they ironed things out, at least for the time being.

Bill Belichick experimented with second-round pick Joejuan Williams at both safety spots, a move that the Pats head coach said was mostly out of necessity. Williams played 15 snaps at free safety and 18 snaps as a box defender after mainly playing cornerback in the first three preseason games. In the postgame locker room, Williams said Thursday night was the first time he played free safety since High School. Williams took some reps in man coverage against tight ends and made a nice tackle as an underneath zone defender. With his size and skillset, it’s easy to see Williams’s fit as a hybrid player in a similar vein to Patrick Chung. For the 2019 defense, it might be his only way on the field. In my opinion, his future is still as a boundary corner, but hybrid defensive backs are extremely valuable nowadays.

The Patriots lost another interior offensive lineman with Froholdt exited the game in the first quarter. The rookie fourth-rounder was dealing with a shoulder injury entering Thursday night’s preseason finale and appeared to reinjure the shoulder. Pats OL coach Dante Scarnnechia didn’t hold back when I asked him about the Danish Destroyer earlier this week. Scar said they need a more disciplined approach out of the rookie. He also called Froholdt’s four holding penalties in three games “unacceptable” in his review. The team still views the rookie as a potential starter in the future, but the trade for Jermaine Eluemunor made it clear that Froholdt isn’t close to contributing this season. After Thursday night’s injury, Froholdt could end up redshirting his rookie season, which pains me to write.

8. Keion Crossen’s Up and Down Day

Second-year cornerback Keion Crossen had an eventful day in the Patriots secondary. Crossen’s value to the team this season is as a special teams ace, which is a good thing because he is a bit of a roller coaster in coverage. The 2018 seventh-round pick gave up a 35-yard touchdown in the first quarter then had an interception and a pass breakup later on.

On the touchdown, Crossen is trailing Giants wide receiver Alonzo Russell. When a corner is operating from out of phase, or behind, the Patriots teach them to play through the hands of the receiverrather than turning back to locate the football. Crossen turns his head back from out of phase, and Russell separates at the top of the route for the score.

After the touchdown, Crossen admitted that he was a little down, crediting his teammates for picking him up, leading to his interception.

“That [the interception] came off encouragement and energy from the guys, ‘hey Key, you got it, don’t worry about it, next play. You have a whole game; this is just the first quarter.’ Just keeping me uplifted and the DBs said, ‘how about you get a pick so we can celebrate.’ We just went out there and played as well as we could.”

Crossen started giving me excited eyes when I asked him about his progress in the kicking game. Last season, both Matthew Slater and Nate Ebner told me several times that Crossen would soon be an elite special teamer. He’s trending in that direction even if he doesn’t contribute as a corner.

9. David Parry Made it Hard to Release Him

Parry did everything he could to make the Pats roster, but the numbers are what they are, and it probably won’t be enough. He’s a bull in a China shop type, always making things messy in the middle of the defense. The fourth-year pro had a strong summer.

10. A slew of Notable Players Sit Out Finale

Based on the fact that they didn’t play tonight, the following players appear to be safe, barring a trade: Terrence Brooks, Nate Ebner, Duron Harmon, Adam Butler, John Simon, Danny Shelton and Elandon Roberts. As for backup quarterback Brian Hoyer, my gut says he’s on, but I wouldn’t be surprised either way. Also of note, defensive end Deatrich Wise did play on Thursday night. Wise is on the bubble.