Lazar: Ten Things We Learned From the Patriots Preseason Opener 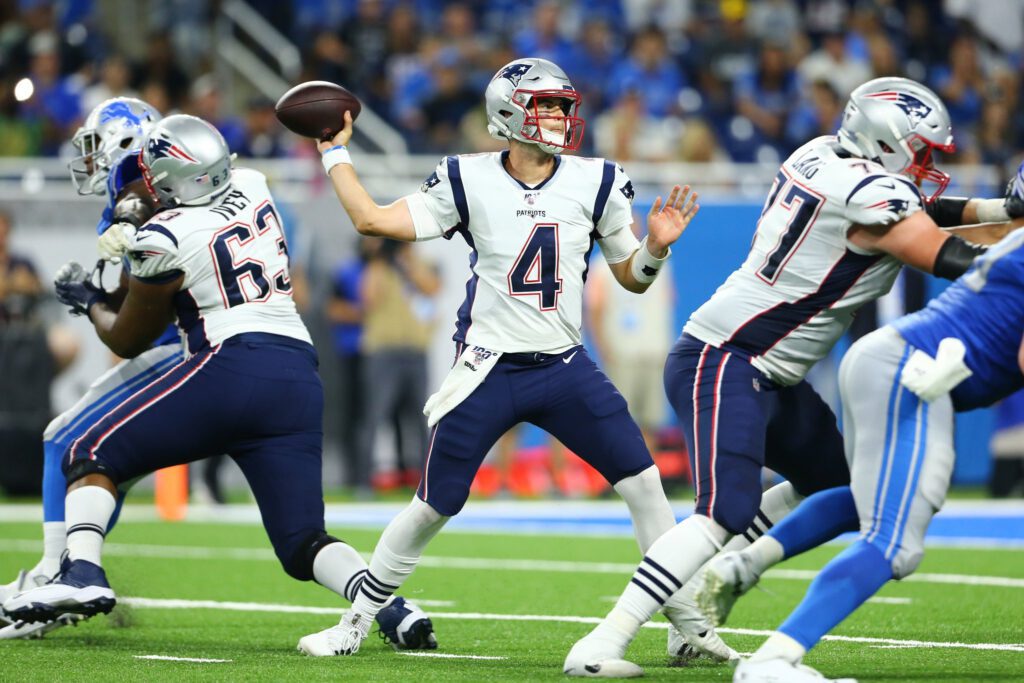 DETROIT, MI — My oh my was it good to have football back in our lives again.

The Patriots and the Lions opened the 2019 preseason at Ford Field on Thursday Night but don’t tell the defending champs that these games don’t count in the standings.

Bill Belichick’s team put a hurting on Matt Patricia’s Lions with a 31-3 victory that saw the Patriots out-gain Detroit by 366 yards and a plethora of positive takeaways for New England.

The Patriots had multiple contributions from their new-look wide receiver corps, but the Detroit secondary put up little resistance, and frankly, little effort in this one to put things in perspective.

N’Keal Harry, Jakobi Meyers, Braxton Berrios and Maurice Harris are off to a great start, and the good news is that most of it carried over from the practice field, but let’s not celebrate yet.

The defense also did its part sacking Lions quarterbacks David Fales and Tom Savage a combined nine times with six of those coming in the first half.

Here are ten things we learned from a successful preseason opener for the Patriots:

From June minicamp to now, rookie quarterback Jarrett Stidham has improved rapidly. On Thursday night, Stidham got the ball out on time and on target on several throws that were impressive for a rookie playing in his first NFL game. Let’s get to two of Stidham’s throws that stood out to me:

The first Stidham pass that jumped out came in the two-minute drill at the end of the first half. Stidham looked comfortable in the hurry-up situation getting his troops in order. He also made a great read dissecting Detroit’s cover-3 defense. At the snap, you see the safety to the left of Stidham creep down into the box, and Stidham recognizes that this is a cover-3 or single-high coverage. Against this coverage, quarterbacks usually look for a crosser or deep dig route over the middle of the field. Stidham has Braxton Berrios as the first player in crossing behind the linebackers, but he knows that safety rotated down into Berrios’s route path. Instead of throwing to Berrios, he holds the ball and waits for Jakobi Meyers, the second player in, to break across the field. Stidham made the right decision and put the ball perfectly on Meyers’s hands for the completion. Can’t throw it any better than that.

The second throw was actually an incompletion down the sideline to Maurice Harris, one of two near-misses between the two on deep balls. Watch as Stidham stares down the middle of the field to hold the post safety and then quickly pulls the trigger attacking man-to-man coverage on the outside. Again, perfect ball placement.

Stidham had some negative plays in the second half, but he was dissecting coverages like an NFL quarterback and threw an accurate ball.

Harry didn’t play much after possibly re-injuring his hamstring on his second reception but what you saw on Thursday night from the rookie is what we’ve seen on the practice field every day. Whenever Harry has one-on-one on the outside, the Pats QBs know that it’s closer to 70-30 than a 50-50 ball for the rookie. The back-shoulder throw on third down from Hoyer was exactly why the Patriots invested so heavily in Harry.

Skipper wasn’t exactly blocking Trey Flowers or another elite pass rusher out there tonight, but he did enough good things to get a positive grade from me. There’s no doubt that Skipper has the foot speed to play the position. However, he has a long way to go with his technique still. Skipper can’t rely on natural leverage because of his height, so he needs to work on bending his knees to get his pads down. He also doesn’t generate any power from his upper body because he doesn’t extend his arms when he engages. Knee bend might be an occupational hazard of being six-foot-ten, but Scar should be able to get him to be more aggressive with his hands. Pass protection is not meant to be passive.

4. Brian Hoyer Lights Up Lions in First Half

If Jarrett Stidham is coming for his job, Hoyer is not going to give it away easily. The vet put up a stat line of 12-14, 147 yards, two touchdowns and a near-perfect 150.0 rating. Hoyer has a professional command of the offense solving problems before the snap, making the right decisions and putting the ball in the right spot. On the Pats first touchdown drive, he marched them down the field and made two excellent aggressive decisions to attack the Detroit defense. The first one was Harry’s third-down grab, and the second one was the TD to Maurice Harris.

On the touchdown, the Lions were in a single-high coverage, meaning there was one deep safety in the middle of the field, so Hoyer took a shot to the end zone dropping a dime to Harris who made a tremendous one-handed catch. Stidham might be the next big thing in Foxboro, but Hoyer is still sticking around.

At this point, it’s safe to say that the Patriots found something with undrafted rookie Jakobi Meyers. He took what we saw at practice and brought it to Ford Field on Thursday night. He has a knack for getting open, terrific hands and a QB friendly catch radius.

On his second touchdown, I dragged the cornerback for giving up his inside leverage on the goal line, which is a big no-no for a defensive back. But Meyers does use a nifty crossover release taking a hard jab step to the outside to get the corner to move before cutting it over the middle. Even though he’s not an elite athlete, Meyers’s ability to make subtle moves to manipulate man coverage allows him to get open.

6. Jamie Collins Was a Man Among Boys

Collins played a few snaps in the first quarter with a makeshift starting defense for the Pats, and he was the best player on the field.

First, he slithered past the tight end and destroyed the fullback to blow up a running play with rookie Joejuan Williams cleaning things up.

And then on the next defensive series, he blew right by Lions tackle Tyrell Crosby for a sack.

Collins mostly played on the line of scrimmage as the strong-side linebacker in the Pats’ base defense, and the more I see of him, the more I think he’s going to be a contributor this season.

(side note: someone tell Tom Savage to stop dropping so deep and help his tackles out).

7. Patriots Defense Has a Sack Party

As noted earlier, the Patriots sacked Savage and David Fales nine times on Thursday night with Derek Rivers, Chase Winovich, Terez Hall, Danny Shelton, Jamie Collins, Ja’Whaun Bentley and Shilque Calhoun all bringing down the quarterback. The Patriots don’t game plan for the preseason, and the Detroit offensive line struggled, but it was still good to see the guys up front execute the basic pressure packages that New England runs every week.

Okay, maybe it’s not the best nickname, but I have a serious man-crush on fourth-round pick Hjalte Froholdt. His fast feet allow him to make blocks on the move, which fits the scheme perfectly, and he has excellent core strength and balance in his pass sets.

On Gunner Olszewski’s only carry of the game, Froholdt, the left guard, makes an extremely difficult block to reach the linebacker lined up outside of him in the B gap and completely turned number 39 on the Lions inside allowing Gunner a clear path to the edge. Trust me, that’s not an easy block.

Froholdt told me after the game that he started playing football at 12-years-old in Denmark, but he’s much more than a cool story; he can play.

The Pats got what I expected from their tight ends on Thursday night. Ben Watson served as a useful security blanket while Matt LaCosse caught a 24-yard strike up the seam from Hoyer. Three catches, 51 yards and some blocking (we’ll ignore LaCrosse’s hold for now)? That’s what the Patriots need from this group this season.

10. Duke Dawson the Lone Blemish on a Near-Perfect Night

The 2018 second-round pick is in an uphill battle to make the roster. On the first long completion he surrendered, Dawson played to his safety help from Duron Harmon. Harmon dropped down to cut the crosser, and Dawson expected him to be there to help defend the pass. But there’s still too much space there as Dawson never recovered after he let Brandon Powell release freely over the middle of the field. Would say it wasn’t played well by either Pats defensive back.

Hey, look at Braxton Berrios running the whip, pivot or jerk route. Whatever you want to call it, I know it made Julian Edelman and Danny Amendola smile. Plus, Berrios looked pretty good on punt returns too.