Ten Things We Learned From Patriots vs. Eagles 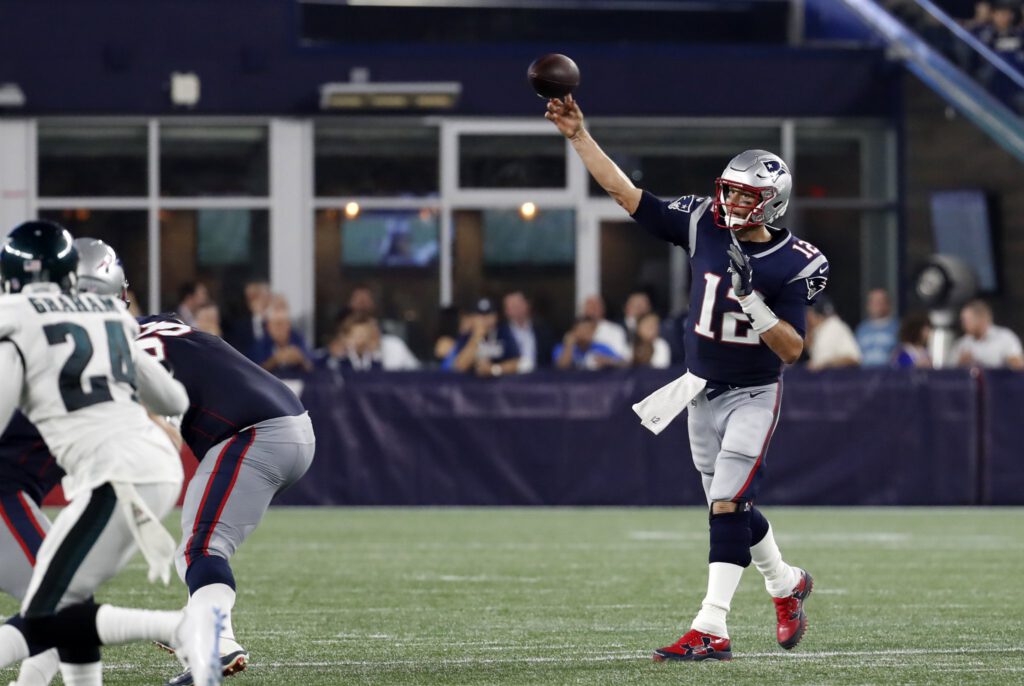 FOXBORO, MA — The Patriots got some revenge on the Philadelphia Eagles with a decisive 37-20 win at Gillette Stadium on Thursday night.

As always, the major storylines coming out of the preseason are player-based rather than the final score, so with that in mind here are ten things I learned from the Patriots’ second preseason game of the season:

1. Tom Brady Reintroduces Himself in 2018 Debut

The reigning MVP looked sharp as usual completing 19 of 26 passes for 172 yards, two touchdowns and a 116.2 passer rating in his first game action of the preseason. Brady played the majority of the first half before giving way to backup Brian Hoyer at the tail-end of the second quarter. As he so often does, Brady showed off terrific awareness and footwork in the pocket, eluding the Eagles pass rushers and finding receivers downfield.

On his touchdown pass to Chris Hogan, Brady stepped up to avoid the pressure off the edge and found a soft spot in the pocket before locating Hogan and delivering a dime to the back of the end zone. Later on, he had a similar dodge and found Hogan, but the Pats receiver dropped the pass. The future Hall of Famer had a few inaccurate deep attempts due to pressure, one to Phillip Dorsett and another to Hogan, but Brady was Brady on Thursday night.

The Patriots’ top first-round pick made his NFL debut against the Eagles on Thursday night, but it didn’t last long. One of the few negatives from tonight’s game was Wynn’s injury, which the Patriots called an ankle issue, but looked like it could be severe for the former Georgia Bulldog. Wynn looked solid at right tackle in limited action showing off good footwork out of his pass set and solid anchoring ability, but the fear is that he could be out for significant time, and may have even torn his left Achilles tendon.

Patriots rookie linebacker Ja’Whaun Bentley doubled down on his stellar performance against the Redskins in the first week of the preseason with another strong showing against the Eagles. Bentley is noticeably faster in space and quicker to react to passing plays than he was in college. I asked the rookie if he felt faster than he did last season at Purdue, and after asking if it was a trick question, he eventually admitted he’s moving a bit better since joining the Pats:

The Patriots moved the young linebacker around the defense and taxed him with a number of different assignments, including flexing him out against Eagles running back Wendell Smallwood on the first series of the game. Bentley turned and ran with Smallwood down the sideline, forcing an overthrow with solid coverage. He then broke up a pass in the end zone and scored on a 54-yard fumble return touchdown on Adrian Clayborn’s strip-sack. It’s only the preseason, but Bentley continues to impress.

The Patriots pass rush was the story of the night. The Pats starting defense racked up five sacks in the first half, led by Adrian Clayborn’s strip-sack of Nick Foles that Bentley took to the house for a touchdown. Clayborn’s combination of strength, speed, and technique on the edge is something that has been missing from the Patriots’ defense over the last few seasons.

On his strip sack, you see him use a nasty swipe and rip move which is a devastating counter to his speed-to-power bull rush. Clayborn swipes his hands down on the tackles punch to clear his body and then rips and bends around the edge before closing in on Foles. Clayborn’s intelligence, he always has a plan of attack, and physical abilities are a welcomed sight for Patriots fans.

Last week, Rivers looked like a player that hadn’t played in a game in a year with sloppy technique and poor awareness in the run game. However, the second-year defensive end rebounded nicely on Thursday night with a terrific performance rushing the passer. The most intriguing aspect of Rivers’ play was that he unleashed an arsenal of pass rush moves to add to his speed-to-power bull rush, something he didn’t do last week. In the first half, Rivers racked up three pressures on three different pass rush moves, and two of them came on back-to-back plays. Rivers used his length on a bull rush with a long arm right into the chest of the tackle pushing him back into Foles, then later had a sweet club and rip move to apply pressure again, but his best move came on a sack in the second quarter.

Rob Ninkovich on Derek Rivers' first preseason sack: "Power to pull. You fake the power and then the tackle sits and you pull them forward." pic.twitter.com/TJOhHuVjXg

Rivers used a lethal punch and dip move to beat the tackle. You can see Rivers’ power, length and bend around the edge all in one play here. That’s the best rep I’ve seen Rivers take as a pro. I asked him after the game if he felt more comfortable out there this week in his second game back from the torn ACL a year ago, his response, “a little bit, but we have a long way to go.”

6. Running Back James White Looks Better Than Ever

The Super Bowl LI hero had a stellar performance against the Eagles, leading the team with 92 yards from scrimmage on Thursday night. On the Patriots’ first drive, White delivered one of his patented jump-cuts to get free up the left sideline for a long 22-yard gain. He then followed that up in the passing game on the receiving end of a few screen passes from Tom Brady that went for big yardage, including a 20-yard touchdown. White looked as explosive and elusive as ever and showed some decent power in the run game. Expectations from this perspective are sky-high for White this season.

7. Cornerback Jason McCourty Gets His Chance to Shine, Has Up and Down Performance

We didn’t see cornerback Jason McCourty last week against Washington, but the McCourty twin got the start and played the lion’s share of the snaps with the starting defense at outside cornerback. McCourty moved well and can still run with NFL receivers, but he did get beat badly on a double-move down by the goal line by Eagles wide receiver Shelton Gibson. McCourty looked better in press coverage than off-coverage, which is no surprise given his history, but still has trouble getting to his spots in zone coverage. I think McCourty can still play in the NFL, but he isn’t forcing the Patriots’ coaching staff to give him a roster spot right now.

8. Rookie Seventh-Round Pick Keion Crossen Starts in the Slot for the Patriots

The young speedster got the call as the Patriots’ slot cornerback in their base nickel defense, but it was a struggle for the rookie on Thursday night. Crossen handled his responsibilities in underneath coverage well but had trouble turning and locating the ball when targeted downfield. Crossen’s college tape was one of the more electrifying tapes I watched last draft season, he has incredible speed and hustles his butt off, but tonight he was picked on by the Eagles quarterbacks. Crossen was called for three penalties, including two defensive pass interference calls, and struggled out of press coverage with his back to the quarterback. The Patriots started second-year corner Jomal Wiltz in the slot last week and gave Crossen the opportunity to show what he could do this week, but the rookie was exposed.

The Patriots unleashed Cordarrelle Patterson Thursday night as we got a glimpse of what his role on offense could be this season. Patterson had a hefty workload in the final three quarters of the game, but it was two plays that told us all we need to know about the former first-round pick. On the first play, Patterson took a tunnel screen 23 yards down the sideline showing off that rare combination of size, speed, and elusiveness. What stood out on the screen was Patterson’s strength after the catch, as the first tackler he made miss bounced right off the 6-2, 220-pound receiver.

On the second play, an 11-yard touchdown catch and run, Patterson flashed nifty footwork with a devastating jump-cut that left Eagles cornerback Sidney Jones grasping at air in the highlight of the night for the Patriots’ offense. We weren’t sure if the Patriots would utilize Patterson on offense this season, but it looks like he’s going to contribute in that role in some capacity.

One of the surprising developments last week against Washington was a subpar performance from the Patriots’ top cornerback, Stephon Gilmore. Gilmore bounced back nicely on Thursday night and looked much more engaged in Week 2 of the preseason. Gilmore had perfect coverage on a deep ball down the right sideline that he knocked away from the intended receiver, and then later stayed in-phase on a shallow crossing pattern that was similar to the one that he got beat on last week. Gilmore’s performance on Thursday night should help quell any concerns about the Patriots’ #1 corner.