Ten Things We Learned From Patriots vs. Giants 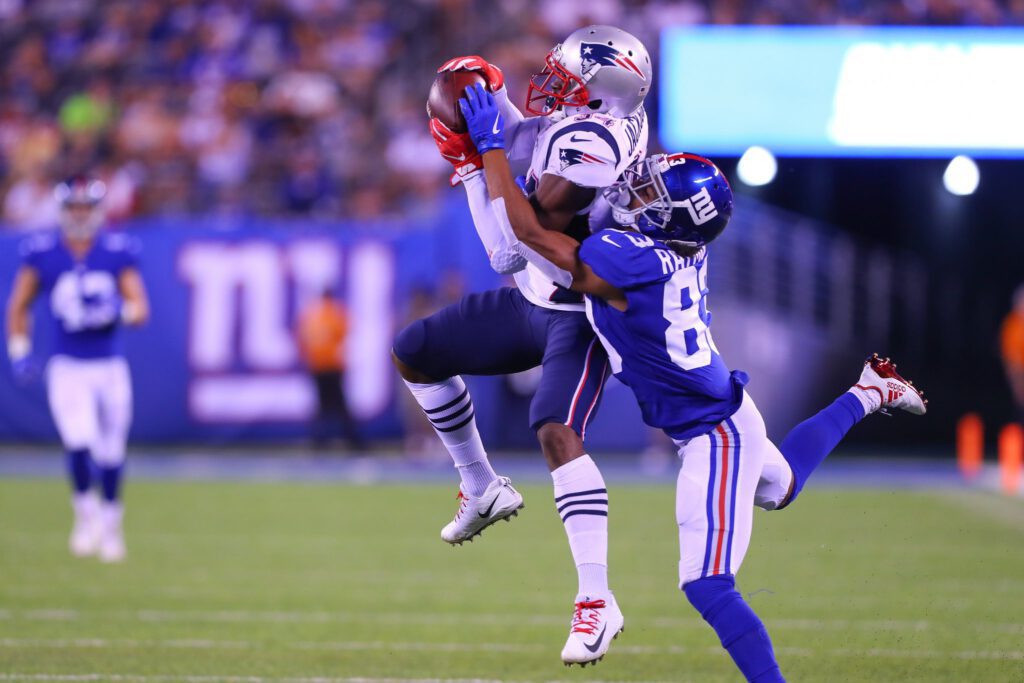 EAST RUTHERFORD, NJ — For the 14th consecutive season, the Patriots closed out the preseason against the New York Giants.

On the scoreboard, Danny Etling’s 86-yard touchdown run sealed a 17-12 victory over the G-Men.

However, as always, the biggest takeaways from Thursday night’s preseason finale involve individual players, not the final score.

With that in mind, here are ten things we learned from the Patriots’ win over the Giants:

1. Danny Etling Looks Like a Seventh-Round Pick in First Extended Action of Career

After logging just ten snaps in the first three preseason games, rookie quarterback Danny Etling went the distance on Thursday night playing every offensive snap in the preseason finale. Unfortunately for Etling, the LSU product struggled in his first extended action of his NFL career. Etling’s footwork and upper-body mechanics, two significant concerns based on his college tape, haven’t improved all that much during his time with the Patriots it appears. Etling still struggled to throw with a balanced base as he continuously brings his feet together on his release, which makes it difficult for him to control the football on his passes. Etling also struggled with holding onto the football in the pocket, another weakness that was apparent on his college tape.

For example, on his longest completion of the night, a 45-yard throw to wide receiver K.J. Maye, Etling was slow to release the football with Maye streaking open downfield. As you see above, Maye is open as soon as he crosses the Giants’ 35-yard line, but Etling hangs onto the ball which gives Giants cornerback Grant Haley a chance to run down the pass. If Etling anticipates this throw and releases it earlier in the down, it’s a touchdown for Maye. Etling has a long way to go before he’s a serviceable NFL quarterback.

Rookie cornerback J.C. Jackson was the star of the night intercepting two passes by Giants rookie Kyle Lauletta. Jackson has impressive coverage skills for an undrafted rookie, as he displayed multiple times the ability to transition his hips to a vertical release without losing ground to the wide receiver running in a straight line, and then can locate the football in the air.

On both of his interceptions, you see Jackson flip his hips to run vertically with the receiver, close the gap between himself and the receiver, locate the football, and high-point the football while hauling in the interception. The rookie corner did get lost in traffic on a mesh concept that resulted in a long touchdown for the Giants, but his ability to protect the deep part of the field on the outside will likely earn him a roster spot as a reserve corner.

3. Jason McCourty Plays into the Third Quarter in Preseason Finale

It’s usually not a good sign when a veteran player is still on the field late in the fourth preseason game, and defensive back Jason McCourty was still in the game early in the third quarter on Thursday night. However, some of McCourty’s usage is likely the result of a change in position for the veteran cornerback. The Patriots moved McCourty to safety, a position he said he hasn’t played since Pop Warner before last week, to see if he can make the roster in that role, and he performed adequately against the Giants. The Patriots purposely asked McCourty to do a lot of different things on Thursday night, including playing deep safety in both cover-1/3 and cover-2 and asked him to rotate post-snap from a robber position to a deep safety position. Head coach Bill Belichick said that McCourty made a big leap in his second week at safety. As the game wore on, it was apparent that McCourty is in a roster battle with 2015 second-round pick Jordan Richards, as the two defensive backs switched off playing at safety throughout the game.

4. Cyrus Jones’ Confidence in the Return Game is Back

The Patriots gave 2016 second-round pick Cyrus Jones every opportunity to shine in the return game on Thursday night as the former Alabama star handled all of the return duties both on kickoffs and punts. The demons that haunted Jones throughout his rookie season seem to have gone away, as he handled the football well and looked comfortable fielding kicks, but he didn’t get the chance to flash that explosive return ability we saw in college due to a solid performance in the kicking game from the Giants. Jones also played a healthy amount of snaps at slot corner, but if Jones is going to make this team it’s going to be as a returner.

Second-year offensive tackle Cole Croston got the nod protecting Danny Etling’s blind side as the Patriots’ second-string offensive line took the majority of the snaps on Thursday night. Croston is in a battle with veterans Ulrick John and Matt Tobin for a roster spot as the team’s fourth offensive tackle but appears to be in good standing with the coaching staff given that he earned the start at left tackle. Croston’s foot speed and build are good enough to play in a reserve role at this level, but he has a tough time anchoring against power at times. With the injury to Ulrick John against the Giants, it looks like Croston will earn the final roster spot on the offensive line.

In typical preseason fashion, the Patriots used the fourth preseason game to give wide receivers coach Chad O’Shea an opportunity to call plays on offense. In fact, offensive coordinator Josh McDaniels sat in the coaches booth allowing O’Shea to run the offense on the sideline on Thursday night. O’Shea had his hands full trying to manage Etling but passed the test from this perspective. Over the last few offseasons, O’Shea’s name has surfaced as the successor to McDaniels if the Patriots’ OC were to leave the team to become a head coach elsewhere.

In a bit of a surprise, defensive tackle Adam Butler played on the first two series of the game on defense. Many, including myself, figured Butler was a roster lock at this stage as he has followed up his rookie season with a strong training camp in 2018. Butler proved that he’s well beyond logging snaps in the fourth preseason game, as he forced an incompletion on a third down play with his patented club/rip move to provide pressure up the middle. It would be a stunner if Butler is released by the team when they cut down the roster to 53 players.

Along with Butler, pass rusher Derek Rivers also got some work in the team’s final preseason game. Rivers missed his entire rookie season with a torn ACL, so maybe the Patriots thought he could use the extra work as he continues to get back into game shape, but it was still surprising to see him out there with the backups. Rivers has flashed the pass rushing ability that made him a highly coveted prospect in the 2017 NFL Draft, but his awareness and technique (ducking his head) are still question marks in year two. There’s no way the team releases Rivers on Saturday, but it was still notable to see him out there with the rest of the roster locks taking the night off.

Third-year linebacker Nicholas Grigsby, who suited up for five games with the Patriots in 2017, made his case on Thursday night for a roster spot with an impressive showing. Grigsby tallied 13 combined tackles as he flashed that sideline-to-sideline speed that makes him a menace on special teams. As he did last week in Carolina, Grigsby also held up well in coverage as he has the athleticism to play in the NFL. The former Pittsburgh Panther is sometimes slow to react to plays developing around him at linebacker, which forces him to use his speed to recover from bad angles, but he’ll be on my final roster projection as a core special teamer and reserve linebacker.

Finally, undrafted rookie Trent Harris may not make the Patriots roster, but he’ll either get scooped up by another team or be a well-paid practice squad player for the Pats this season. Harris is an extremely fundamentally sound football player who’s always in the right spot. His athleticism is a bit of a question mark at this level, but he has strong hands as a pass rusher and knows how to use them effectively. If it’s not with the Patriots, don’t be surprised if you see Harris on an NFL roster elsewhere.