Ten Things We Learned From Patriots Loss to Jaguars 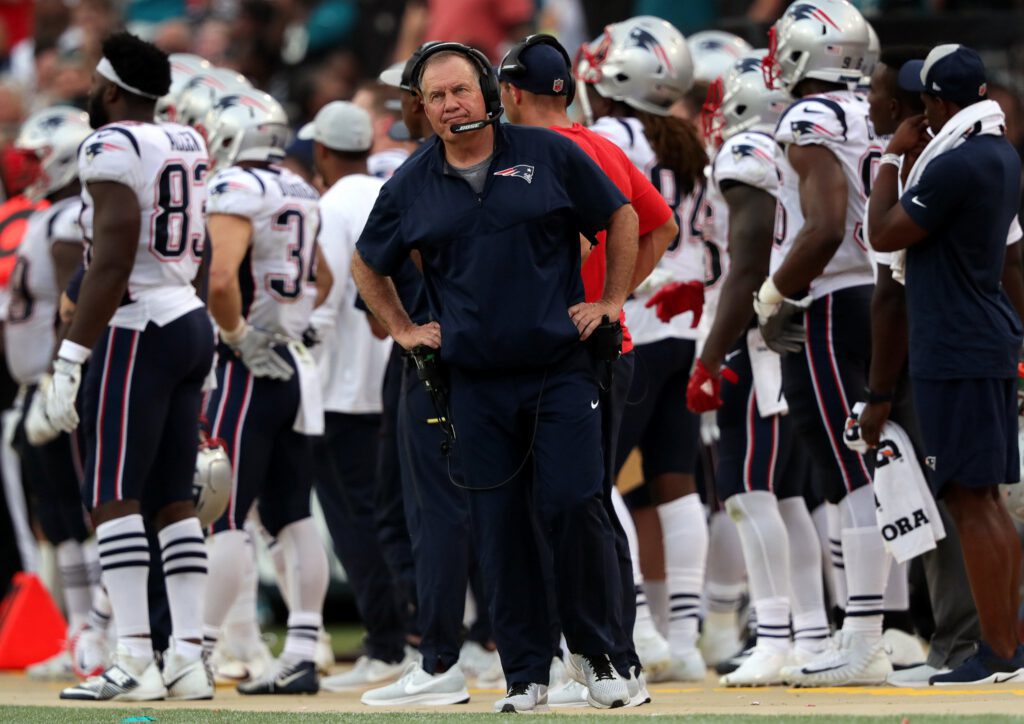 JACKSONVILLE — The Patriots fell to the Jacksonville Jaguars 31-20 in the hottest game in both teams histories on Sunday afternoon at TIAA Bank Field.

Although the Pats made things interesting in the second half, there were a lot of concerning developments on both sides of the ball.

With that in mind, here are ten things we learned from the Patriots’ first loss of the 2018 season:

The Jaguars coaching staff thoroughly dominated this game when the Jags had the football. Jacksonville averaged 7.0 yards per play and tallied nearly 500 yards of offense (481) to go along with the 31 points. The Jaguars’ plan had the same goals as their AFC Championship Game strategy, but they went about it a bit differently and were even more effective. The Jags attacked the second-level of the Patriots defense with a number of crossers, over routes and underneath patterns designed to attack the Pats defense horizontally to set up run after the catch opportunities. The Jags also ran the football off-tackle early on in the game which is another Achilles heel of the Pats defense, and Bortles tested the Pats’ outside corners in single coverage downfield.

Patriots linebacker Kyle Van Noy said the struggles with the crossing routes is a combination of scheme and speed saying, “a little bit of both [scheme and good athletes]. They did a good job, and we didn’t do a good job. We’ll look at the film; film don’t lie.”

Although it’s certainly fair to criticize the holes in the Patriots defense and the coaching, as far as the game plan and play calling goes, the Jags did precisely what teams like the Chiefs and Eagles did to carve up the Patriots defense last season, and executed to perfection.

Entering Sunday’s game, I didn’t expect the Patriots pass rush to get much pressure on the edges, but it was surprising that the interior pressure was mostly nonexistent. Jags left guard Andrew Norwell was an All-Pro last season, he’s a stud, and center Brandon Linder is a big-money player at center, but the Patriots should’ve had a clear advantage over starting right guard A.J. Cann. This is where the impact of Trey Flowers’ injury really hurt the Patriots, as Flowers would’ve been the perfect pass rusher to line up over Cann in obvious passing situations. The clean interior of Blake Bortles’ pocket gave the Jags quarterback all day to step up and wait for those crossers to develop over the middle.

After the game, Patriots safety Duron Harmon harped on the Patriots defense’s inability to get off the field on third down. The Jaguars went 10-14 on third down (71 percent) finding a multitude of ways to convert on the money down on Sunday.

It will be interesting to see on film how exactly the Jaguars were able to beat the Patriots on third down continuously, but one thing’s for sure, Blake Bortles’ legs were a huge factor. Belichick spoke multiple times this week about Bortles’ underrated athleticism and ability to extend drives by running the football, and the Jags quarterback picked up three huge third-down conversions by escaping the pocket as a runner. It’s unusual to see such a significant point of emphasis go so awry for a Belichick coached defense.

The Patriots may have lost on the scoreboard, but it would be an even bigger loss if defensive leaders Trey Flowers and Patrick Chung miss extended time due to the concussions they suffered in Sunday’s game. Chung was named a team captain for the first time this season and didn’t look like himself on the field before leaving the game with a head injury.

However, it’s Flowers that would be an even more significant blow to the Patriots defense if he were to miss serious time. Flowers is the best player on the Patriots defense from this perspective, and his absence was evident as the Pats didn’t record a sack and only registered four quarterback hits on Blake Bortles. As soon as Flowers left the game, so did the Patriots pass rush.

Another focus of my film study this week will be on what the Jaguars did to limit Patriots tight end Rob Gronkowski to just two catches for 15 yards on the day. Gronk started out hot with a nine-yard completion on the Patriots’ very first play from scrimmage but only recorded one reception for six yards the rest of the way. On initial viewing, it appeared that the Jaguars bracketed Gronkowski for most of the day with two defenders sticking on the tight end in the middle of the field. The Patriots tried to isolate Gronk a few times on the outside, but that was also unsuccessful. After the game, Gronk said of his performance, “It’s difficult against a team like that and you have to be prepared. You have to be ready and find the openings. And that’s one thing I didn’t do today.”

At Bill Belichick’s press conference on Friday, the Patriots head coach told the media that Jaguars running back Corey Grant, “wasn’t lost in our film” when asked about the receiving back. Well, the Patriots lost Grant on a number of key plays as the Jags running back hauled in five catches for 51 yards, four of which went for first downs. In particular, it seemed at times that the Patriots defense was allergic to tackling Grant, who claimed many a defender with his tackle-breaking moves in the open field. The Patriots struggles continue defending pass-catching running backs. On Grant, Van Noy simply said, “he’s fast.”

7. It Takes Four Complete Quarters of Football to Beat the Patriots

The Patriots players didn’t find any silver linings in the loss, but from afar you do have to admire their ability to make games like these competitive. In the first half, it looked like the Jaguars were about to run the Patriots off the field, but the Pats hung in there and made Jacksonville sweat it out in the end. Two key turnovers, a Kyle Van Noy interception and a Stephon Gilmore strip, got Tom Brady and the offense rolling with a few extra possession. At one point, the feeling in the press box reminded many of the AFC Championship Game last January, as the Patriots were able to keep the game within a few scores to give themselves a chance. A comeback wasn’t in the cards on Sunday, but you still have to marvel at the Patriots’ ability to flip a switch in games that look like they’re headed for a blowout.

8. Play Calling Was a Mixed Bag, Led to First-Half Struggles

The Patriots offense opened the game in a formation that I expected them to stay in for as long as possible. They had running back Rex Burkhead and tight end Jacob Hollister on the perimeter across from the Jags’ All-Pro cornerbacks Jalen Ramsey and A.J. Bouye. That left both Gronk and Phillip Dorsett with favorable matchups on the inside of the formation, and it led to a nine-yard completion to Gronkowski on first down.

However, from there, the Patriots and offensive coordinator Josh McDaniels struggled to find a rhythm in the first half. There were far too many handoffs off the edges against a speedy Jaguars defense that isn’t going to let you go sideline-to-sideline on them, and a shorthanded receiving corps didn’t get the help it needed from the coaching staff to create separation against a terrific Jaguars secondary. McDaniels is still one of the brightest offensive minds in football, but he’s had better days.

9. Pats Offensive Line Competitive, But One Major Slip Up Stands Out

For most of the night, the Patriots offensive line held its own against one of the best pass rushes in the NFL. The O-Line struggled early on the Pats first drive of the game failing to communicate through a simple tackle/defensive end stunt which led to a Brady throwaway on third down, but two sacks and three quarterback hits, which was the final tally for Jacksonville’s defense, is all you can ask for from the guys blocking for Tom Brady.

Although they gave the Pats offense a chance, one play loomed large. Backup right tackle LaAdrian Waddle, who got the start for the injured Marcus Cannon, was beaten badly by Jags edge rusher Dante Fowler on the fourth-quarter strip sack that sucked the air out of the balloon for the Patriots. There was nothing fancy about the move that Fowler put on Waddle, just a straight speed rush off the edge, and the Pats right tackle was no match for Fowler’s burst off the snap. In a loss like this one, there’s always a lot of blame to go around, but the pass protection, on the whole, gave the Patriots a chance to win the game offensively.

If you’re looking for some positives, Patriots 2018 first-round pick Sony Michel made his NFL debut on Sunday after nursing a knee injury for the last month and a half. Michel was featured heavily in his debut touching the football 11 times and taking on a heavy workload in the Pats backfield. Michel echoed the sentiment of his teammates after the loss saying, “it wasn’t good enough to win the game,” but the Pats rookie did do some great things in his first NFL action.

First, Michel’s 15-yard run in the third quarter was the Patriots’ longest gain on the ground on the day, and it showed off some great skill from the rookie. Michel flashed great vision between the tackles to find the crease in the Jaguars’ defense and then finished the run with great power running through a tackle and taking on another. The physical and mental skill here is a great sign for a running back appearing in his first NFL game.

And second, although there were multiple breakdowns up front on this play (Gronk whiffs, Brady likely didn’t set protection correctly), this was a great job by Michel to pick up a giant in Calais Campbell in pass protection. One of the things that made Michel a first-round talent to the Patriots was his ability to pass protect in college, and he does an excellent job of cutting down Campbell on this play, who’s a free rusher due to this miscommunication up front, and it avoids the All-Pro landing a big hit on Brady.

There are still plenty of areas for improvement for the young running back, but a solid performance overall for his first time on an NFL field.

11. Patriots Running Back James White a Bright Spot in the Loss

James White’s ability to rise to the occasion in big spots has become a regular occurrence for the Pats, as the running back was the team’s only consistent threat in the passing game on Sunday. White paced the Pats with seven catches for 73 yards, and his 27-yard reception on a screen pass was the Pats’ longest play from scrimmage on the day.

On the screen, the Pats had a beautiful play design with the multiple fakes, one to Patterson on the jet sweep and a play-action fake to White, before White released into the flat. After that, it was all White, who made a devastating cut to set up a block and exploded into the secondary. White has become Tom Brady’s security blanket and one of the Patriots’ most reliable players.