Ten Things We Learned from Patriots vs Lions 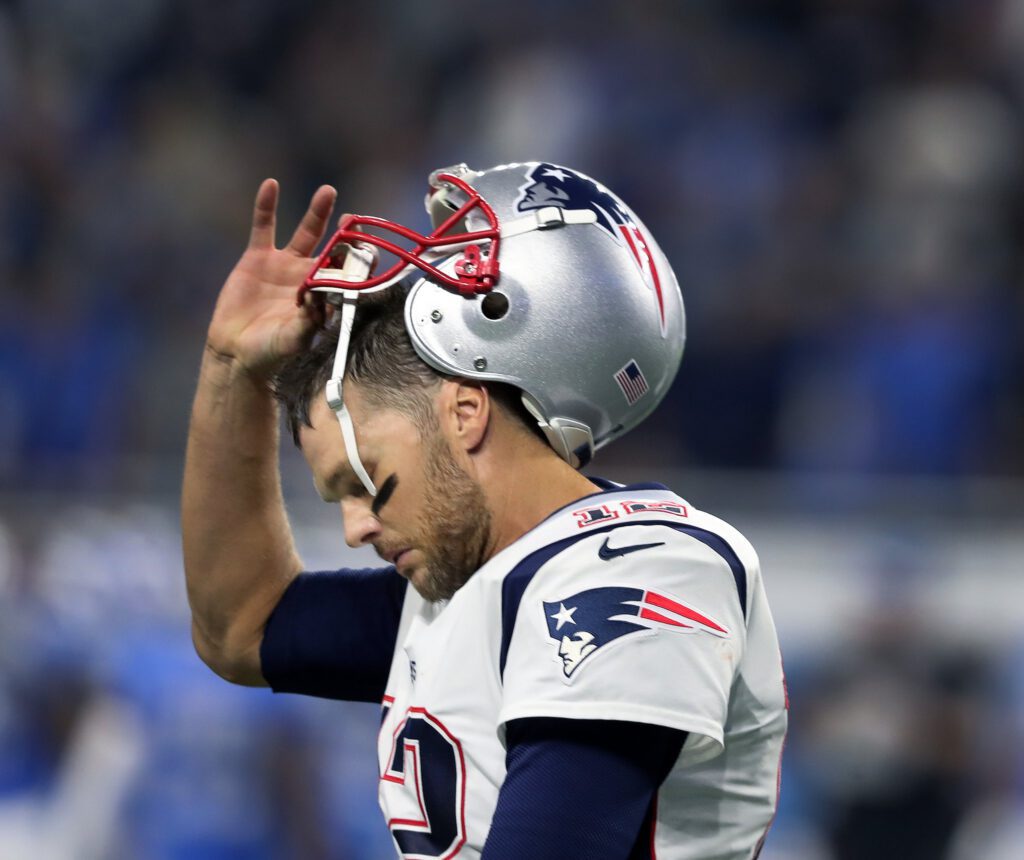 The Patriots are in uncharted territory after a 26-10 loss to the Detroit Lions on Sunday night.

For the first time since 2012, New England is 1-2 through the first three games of the season, and there’s plenty of blame to go around.

The Patriots offense only scored ten points to go along with just 209 yards of total offense, and the defense didn’t offer up much resistance, especially in the first half.

Once again, the execution on both sides of the ball didn’t resemble anything close to what we are accustomed to seeing with a Bill Belichick coached team.

The offense was out of synch, and the defense, helpless, as the Patriots are clearly showing signs of a team that doesn’t have the necessary talent to make up for the sloppiness on both sides of the ball.

Below, I’ll go over ten things we learned from another disappointing loss for the Patriots:

My number one takeaway that looms larger than the issues on defense is the lack of a receiving threat outside of Rob Gronkowski, and how heavily the Patriots will rely on Josh Gordon and Julian Edelman to create some separation upon their returns. The Patriots wide receivers had four receptions for 43 yards, four for 43. Against a secondary that has struggled for the most part to lock down opposing passing games. The Patriots receivers frustrated quarterback Tom Brady to the point where he began heaving passes downfield in desperation.

The only consistent passing play the Patriots had all night were passes between the numbers to Gronk, and those were eventually taken away by Matt Patricia by doubling or bracketing Gronkowski downfield. There were coverage sacks, there were coverage interceptions, and most of all, there was nobody open.

The Patriots defense and their personnel decisions on that side of the ball deserve criticism. But as a result of who this team is, the offense needs to stay on the field to control the way these games are being played. By going 2-9 on third down, the Patriots only possessed the ball for 20:45 in this one. You can point to the fact that the defense didn’t get off the field on third down, the Lions went 7-14 on the all-important down, but ultimately this team is going to win and lose football games with their offense. And to mask their weak defense, they need to possess the ball more when they have the football. Last season, for example, the defense had the same issues and struggled just as much as it has these last two weeks, but the #1 rated offense in football was able to average close to 30 points per game and move the ball at will, and they nearly won the Super Bowl. Just like the 2017 Patriots, the 2018 Patriots need an elite offense to be true contenders

3. Tom Brady Is Not The Problem

If there’s anything good to take from this game, it’s that Patriots quarterback Tom Brady is not the problem. Brady’s physical skills and mental processing haven’t decline one bit. He doesn’t have anyone to throw the ball to outside of Gronk.

Brady’s touchdown pass to James White is a perfect example. Brady is going to go through three reads on this play from left to right until he eventually finds White in the back corner of the end zone. Watch Brady work through his reads, slide up in the pocket, and drop a dime to White for the Patriots’ only touchdown of the game. Again, #12 is not the problem. And that’s good news if the Patriots can figure out their other issues on offense.

4. Middle of the Patriots Defense Gets Blown Off the Ball

There are a lot of issues with the Patriots to go over on defense, but it all starts up front along the line of scrimmage. The Patriots defensive line, especially the interior of the defensive line, was regularly blown off the ball by the Lions offensive line. Rookie left guard Frank Ragnow and left tackle Taylor Decker dominated this game on the ground as rookie running back Kerryon Johnson became the first Lions running back in the last 70 games to eclipse the 100-yard mark. In all, the Lions averaged 4.8 yards per carry as the Patriots run defense offered little resisted as Detroit pounded the rock with their power running game at will on Sunday night. The main concern here is that, even when single-blocked, Patriot defenders were unable to hold the point of attack, shed blocks or penetrate the Lions offensive line. On defense, the rule of thumb, especially for interior defensive lineman, is that if you’re singled blocked on the inside you have to win that matchup by either holding your ground or shedding the block to make a play on the ball carrier, and the Patriots defense was unable to do that on Sunday night.

The Lions went 7-14 on third down on Sunday night, but the frustrating aspect of this was that the Patriots actually got the Lions into some third down and long situations, and still couldn’t get off the field. The Lions on average needed 6.6 yards per play on third down to convert a first down, which is an acceptable number, especially given the Patriots’ struggles on first and second down in the past. The Lions were able to convert no matter what the situation was on third down, and as much as the offense is to blame for the time of possession, the defense can’t get off the field. Last week, the Patriots defensive players harped on their issues with getting off the field on third down, and those issues followed them to Detroit as the Lions possessed the ball for over 40 minutes in this game. From this perspective, the offense is more to blame for the time of possession than the defense, but right now the Pats defense ranks 30th on third downs through three weeks allowing opponents to convert 48.7 percent of the time.

6. Add Run Blocking to the Many Issues on Offense

Last season, by every metric or grading scale, the Patriots were the best run blocking team in the NFL. In 2018, that hasn’t been the case at all as many of the issues we are seeing with the Patriots’ running game are about what’s happening up front and not the running backs carrying the football. The biggest issue I’m seeing when watching these games is that the Patriots offensive line lacks timing and rhythm. So much of the running game is about the five to eight men blocking up front working together as a cohesive unit and building blocks off of one another to spring running backs on explosive runs. One break in the chain usually results in a broken running play. Right now, the Patriots are losing far too many one-on-one battles along the line of scrimmage.

The problem with Josh McDaniels’ play calling on Sunday night was that it was predictable. The Patriots fed rookie running back Sony Michel on 14 of their 19 carries on Sunday night, and Michel took the vast majority of his handoffs with Brady under center. When the Patriots were in shotgun, the Lions knew it was a pass. When Brady was under center, they knew it was most likely a run. The Patriots threw out of shotgun nearly 80% of the time on Sunday night. The predictably, along with some questionable play calls such as multiple stretch handoffs on third and short, brings into question Josh McDaniels’ play calling, and the lack of creativity and cohesiveness offensively. The Patriots pride themselves on being unpredictable and having the ability to make things easier on their offensive personnel with scheme, and through three weeks, the coaching has been as much of an issue as the talent on the roster.

The Patriots offense hasn’t scored a field goal or touchdown on its opening drive in any of their first three games of the season. On Sunday night, the Patriots went three and out on their opening drive after a decent return from Cordarrelle Patterson. All week long, the Patriots talked about getting off to a better start offensively, and once again, they didn’t do it on Sunday night. This also falls in line with the issues with the play calling. On the offensive side of the ball, the first drive or so is typically scripted based on the opponent. In other words, those plays should be highly schemed plays that the Patriots dial up based on their film study that week of the opponent. Josh McDaniels dialed up some great play calls on the team’s opening drive in Jacksonville, but the offensive line broke down on a third down play which led to a long field goal attempt. On Sunday night in Detroit, the Patriots ran the ball twice gaining six yards and then failed to create any separation a third and short. Again, not good enough from anyone.

The Patriots defense was in vintage bend-don’t-break form on Sunday night as they backed off the line of scrimmage in the passing game, allowing Matthew Stafford to dink and dunk his way down the field. To Stafford’s credit, he took what the Patriots defense gave him as the Pats spent most of the night in cover-3 and cover-4 looks. In all, Stafford only threw for 7.3 yards per pass attempt, but the Lions quarterback was more than happy to allow his receivers to create yards after the catch on the short passes to go along with a productive running game as the Lions churned out positive play after positive play. The Patriots’ game plan on defense was clearly to avoid allowing explosive passing plays downfield to the Lions as their trio of receivers were mostly held in check in terms of long gains on deep balls. The game plan made sense given Detroit’s personnel, but the Pats’ inability to stop Detroit on the ground and third down rendered the strategy useless.

Early on in the second half, second-year defensive end Deatrich Wise got the Patriots’ defense fired up with a successful run stop where he showed great technique to shed his blocker and stand up LeGarrette Blount for no gain. Wise then implored his teammates to show more energy and get their heads in the game, and on the very next play, Ja’Whaun Bentley intercepted a Matthew Stafford pass to give the Patriots the momentum in the game. Then, Wise came out on the drive following Tom Brady’s touchdown pass to James White and got the Patriots’ lone sack of the game with a terrific pass rush move.

Here, you see Wise jab to the inside to force left tackle Taylor Decker to set to the inside before Wise shook to the outside finishing the move with a chop/rip to clear his hips through to the quarterback. The Patriots pass rush was nonexistent for most of the night, but Wise showed glimpses of what we saw last season when he had five sacks as a rookie.