Thanks To Superior Weapons And Joe Burrow, Bengals Ready Now To Become The Next Chiefs

Bengals and Chiefs meet Sunday in what could be a glimpse of what's to come in AFC dominance. 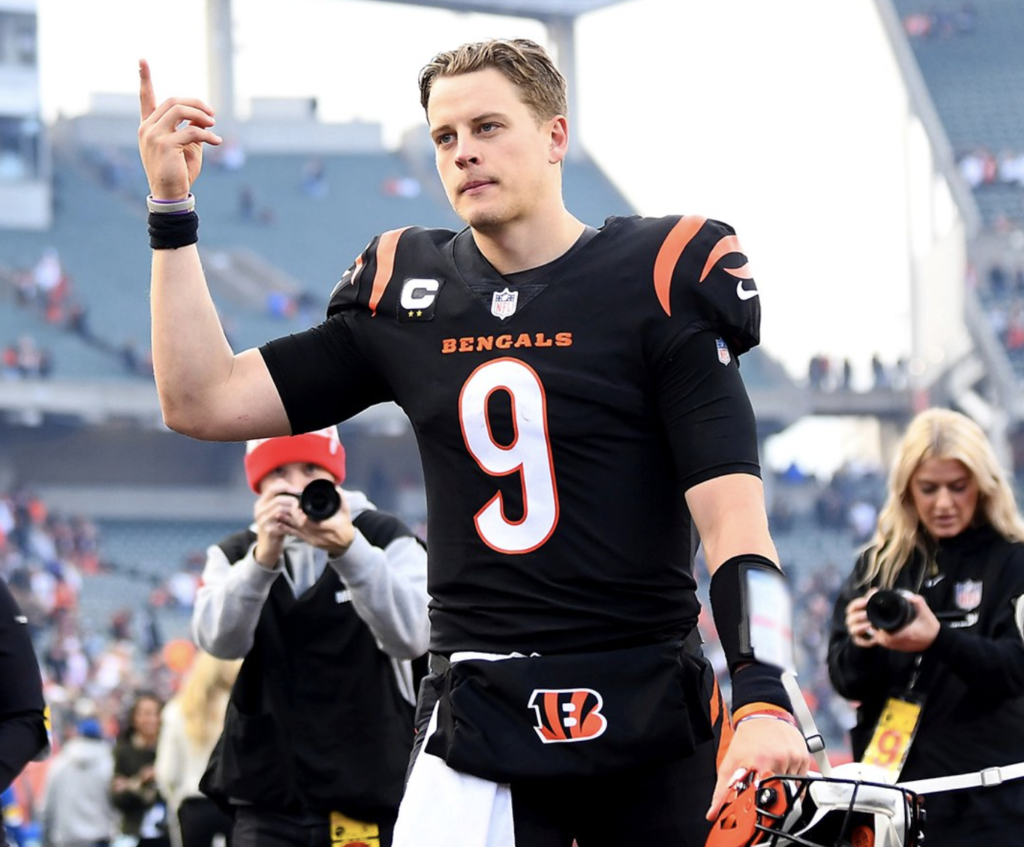 CINCINNATI – Joe Burrow matches up against Patrick Mahomes for the first time this Sunday at Paul Brown Stadium.

It should be the first of many matchups between the two quarterbacks who are likely to set the standard for great offensive football for the next decade in the National Football League. It’s a 1 p.m. ET game Sunday, and if these two continue on their paths, it will likely be the last time we see them against each other in an early afternoon kickoff.

The Chiefs have played in the last two Super Bowls, beating San Francisco, losing to Tampa Bay. They lost to the Patriots in the 2018 AFC Championship at Arrowhead. In two of those losses, Tom Brady was on the other side.

“I think they’re the best,” Tyler Boyd said. “They’re the hot team right now in the AFC. They’re probably the top. They are the top team. If we can beat them guys, then that will let us know how talented and how far we can take this because they’re a great team and they won the AFC championship two years in a row now, so this is definitely going to be a huge statement game for us to go out there and play our best football.”

.@pringle_byron stepped up in a big way on Sunday, and he even double-dipped in the end zone 😎 pic.twitter.com/eOIlP0Ywpw

The Chiefs not only bring to town their all-world QB, but receivers Tyreek Hill, Mecole Hardman and Byron Pringle and another nightmare tight end to stress the Bengals defense (now with LB Germaine Pratt on COVID IR) in Travis Kelce. Add in the offensive brilliance of head coach Andy Reid, and it’s a machine that’s practically unstoppable.

“Well, I think the consistency comes from the chemistry and their top guys have been together now for several years,” Bengals coach Zac Taylor said. “And to my understanding, they’re really close. They’re close on and off the field. So they got great chemistry. And they like being around each other, and just oftentimes the things I’ve heard about the nucleus of their team is a lot of things that I see in our team as well.

“And so again, they’ve done it at the top level now for several years. Coach Reid, there’s not many guys that you’ve got more respect for than him and he’s really found a system that he’s ironed out all the kinks and it’s very nuanced and they understand everything and they put your defense in a really tough position. And they’ve got a quarterback that’s, that’s one of the best ever do it. And so they probably got one of the fastest receivers in the league. They got one of the best tight ends in the league.”

Their running back tandem of Clyde Edwards-Helaire and Darrell Williams are true double threats to run and catch.

“They’ve got backs that they can feature out of the backfield that do a great job of attacking the defenses,” Taylor said. “They’ve got a lot of other weapons on the receiving corps, and they’ve done a great job with the offensive line, too. Drafting, free agency, developing their own, and so it’s just a really unique attack that come at you a lot of different ways. And they’ve had a lot of success over the last couple years.”

What’s so exciting about listing those names for Bengals fans is they can now feel fairly confident that their team is in the same position to do what the Chiefs have done over the last three years with Mahomes at the controls.

Yes, the Bengals are the next Chiefs.

The Bengals have an elite quarterback who just turned 25. They have three elite receivers, a Pro Bowl running back in Joe Mixon, a hybrid in Chris Evans and a vastly underrated receiving tight end in C.J. Uzomah.

The Bengals are one of the few teams in the NFL that actually can line up against Mahomes and Andy Reid and think to themselves, ‘Yeah, we can go toe-to-toe with your offense’ in terms of weaponry. In Ja’Marr Chase, Tee Higgins and Tyler Boyd, the Bengals have three receivers that can break a game open downfield.

The Bengals last week became the first team ever with a pair of 1,000-yard receivers in the same season who are both under the age of 23. They have a 27-year-old slot receiver who is 208 yards shy of joining them in the 1,000-yard club.

You’re talking about “Greatest Show On Turf” stuff here. In their run from 1999-2001, the group of Isaac Bruce, Torry Holt and Ricky Proehl had prolific seasons, with Holt going for over 1,300 yards and Bruce 1,100 yards. Marshall Faulk led the Rams with 83 catches for 765 yards.

Of course, the huge caveat for most of this season is whether Burrow will have the time to get the ball down field. The Bengals line did have a good game last week against the Ravens and there have been glimmers of hope with Isaiah Prince and Hakeem Adeniji. D’Ante Smith is a rookie who needs reps to develop but will that be in Cincinnati?

The Bengals must improve the consistency of the offensive line, no question. They know it and they are in great shape to improve it this offseason with cap space in the $60 million range. Again, the Bengals and director of player personnel Duke Tobin could take a page out of the Chiefs book. Last offseason, the Chiefs added Joe Thuney from the Patriots in free agency and drafted center Creed Humphrey as their starting center and Trey Smith as their right guard.

Still, Burrow has re-discovered his athleticism in the pocket that was on full display in 2019 at LSU. Last Sunday against Baltimore, he was dipping and ducking, slipping and sliding in the pocket. While Mahomes does so much damage running and creating outside the pocket and throwing from crazy angles, there’s a Brady quality about Burrow’s play emerging. Even on jailbreaks, he’s finding receivers down field, like his 15-yarder over the middle to Chase in the second quarter Sunday.

For those who think the Bengals are crashing the party a year early, remember that Burrow has a head start on Mahomes. The Chiefs quarterback took a rookie red-shirt year in 2017 and apprenticed behind Alex Smith.

Celebrate Victory MonDEEEEEY with the best plays from yesterday's game.

In his second season – and first of actual pro football – Mahomes came within an inexcusable Dee Ford offsides against Tom Brady and the Patriots in the AFC Championship of leading the Chiefs to Super Bowl LIII against the Rams.

So, it’s actually not that far-fetched to think Burrow can do some special things in the postseason, including reaching and winning a Super Bowl. But first, the Bengals have to get there, which they will as AFC North champs with a win over Mahomes and the Chiefs Sunday at Paul Brown Stadium.

“We’re right where we want to be,” Burrow told me after the 41-21 dispatch of the Ravens. “We put ourselves in a chance to be in this position. In training camp, we knew what kind of team that we had. We couldn’t ask for a better situation right now. We control our destiny these next two games and we’ve got the division locked.”

This Bengals defense is statistically better than the Chiefs defense in 2018. That Chiefs team allowed 405 yards a game. This Bengals team is giving up just 345. Opposing teams were running it at the Chiefs at will, averaging 130 yards. The Bengals are giving up 92.1 per game.

This isn’t the first time Bengals fans have been led down this path. In 2005, Peyton Manning brought his Colts into Paul Brown Stadium against Carson Palmer and the upstart Bengals in what figured to be the first of many epic showdowns. Peyton won that game, 45-38, in a fashion that many could see this week between Burrow and Mahomes. But the difference then was Manning and the Colts were rightly more concerned with Tom Brady and the Patriots and the Bengals sadly fell to the side of irrelevance and Manning-Palmer never really matured into a great rivalry.

Don’t know if the Bengals are ready to spend nearly a half-billion dollars ($450,000,000) on Burrow like the Chiefs did with Mahomes but this much is true, if Burrow can lead the Bengals to a Super Bowl early in his career and transform the franchise, the Brown/Blackburn family might actually have to take a serious look at it.

For now, the Bengals and the rest of us have at least another three years to sit back and watch Burrow against Mahomes and daydream of battles in primetime and the postseason.