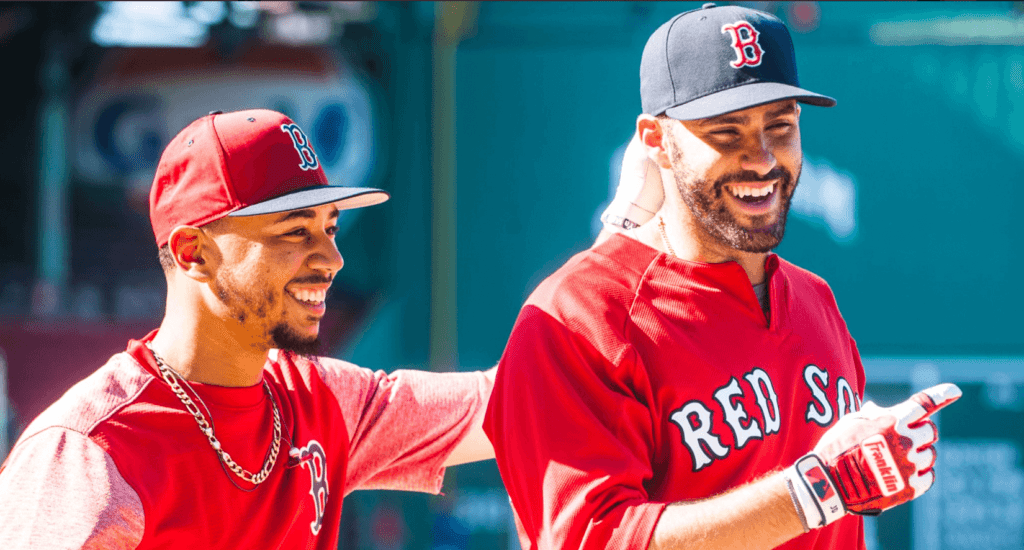 BOSTON — When you’re on pace to win what would be a franchise-record 110 games, there’s no need to panic when other teams would be in full button-punching mode.

One of your critical pieces goes down for 6-8 weeks with a fractured pinkie finger on his throwing hand.

Your No. 2 starter is battling with a case of the yips right now and there’s even speculation that he could head back to the bullpen to – at least temporarily – reprise his very successful role on the 2017 Red Sox.

And the projected starting second baseman still hasn’t fully recovered from offseason knee surgery and is in baseball purgatory waiting for the team to sign off on a plan (expected Tuesday) to move forward.

Manager Alex Cora confirmed the loss of catcher Christian Vazquez to the injury, suffered when he slid while stealing second base in the seventh inning of Saturday night’s 15-4 blowout win over the Royals. Cora also said Monday that the team expects to announce a plan to bring Dustin Pedroia back from rehab.

“It’s not only the knee, it’s the other areas that probably we have to make adjustments as far as like training or strengthen those areas so he can, we can avoid situations like this,” Cora said of Monday’s consult with the veteran second baseman.

David Price is 1-2 with a 7.20 ERA and a 1.55 WHIP over his last four starts against the Twins, Angels, Yankees and Royals. He’s allowed nine homers in those four games and he certainly would not appear anywhere close to opting out of his contract after this season, with the Red Sox still on the hook for $127 million through 2022.

Those are just three minor blips on the radar, for now.

This ’18 roster is loaded with five All-Stars, including Mookie Betts, J.D. Martinez, Chris Sale, Mitch Moreland and Craig Kimbrel. Andrew Benintendi is one of five AL players up for final player selection on the All-Star Game Final Vote. No one is drawing comparisons to the ’04, ’07 and ’13 teams quite yet but they are shaping up. The Betts-Martinez combo is every bit as productive – if not fearsome – as David Ortiz and Manny Ramirez.

Ah, 1978. Those four numbers will forever be linked to the team that was the best in baseball for the better part of five months. Ironically, it was a 13-15 month of July that brought the New York Yankees back into play and the Bombers took full advantage, famously wiping out the 10-game lead on July 8 and winning the one-game playoff on Oct. 2 at Fenway. That team didn’t collapse as much as the Yankees played nearly flawless baseball for two months. That Red Sox team finished 99-63, the most wins since the 1946 team finished 104-50, the last time a Red Sox team won 100 games.

With all due respect to the Red Sox heartbreak in the 1975 World Series, that ’78 season brought hand-wringing to epic levels (matched in ’86, ’99 and ’03) until the Red Sox thirst for a title was finally quenched in 2004.

So much about baseball competition has changed in 40 years. There are two Wild Card teams now and three division winners, as opposed to two division winners in each league. The disparity between the haves and the have nots is enormous now, and we’re not just talking about the Orioles who entered the day 41 games under .500 at 24-65. The entire AL Central after the Indians are below .500 with the White Sox and Royals both in contention for 100-loss seasons.

The Red Sox and Yankees, unlike 1978, have been going at each other nip and tuck since the beginning of the season. And despite the Yankees actually losing a game to Baltimore in the first game of a twilight twin-bill in Baltimore, neither team is showing signs of going anywhere.

Oh right, the Red Sox have won the World Series three times. That dynamic in all of this cannot be overstated. Those three titles offer the benefit of perspective that not every move has to be “the move” that puts the Red Sox over the top.

Which brings us to what Dave Dombrowski could or should do about the state of affairs. The Red Sox President of Baseball Operations isn’t about to pull off any dramatic deals. He doesn’t need to. There’s no reason to go heavy after Miami catcher J.T. Realmuto, not that the Red Sox cupboard is adequately stocked to be able to offer a realistic deal. Dombrowski is more focused, as he should be, on adding key role pieces like utility first baseman/DH Steve Pearce, who drilled a 2-run homer in his first Fenway Park appearance Monday night since being acquired on June 28 from Toronto.

Welcome to the #RedSox, indeed. pic.twitter.com/UOiw3tgmlM

The way Dombrowski built this roster is paying off. His decision to keep Blake Swihart instead of Deven Marrero late in spring training was a minor but significant one now that Vazquez is out likely until rosters increase to 40 in September. The move to release Hanley Ramirez saved the Red Sox $22 million in 2019 and the loss of his bat has hardly been missed with the MVP-caliber seasons of J.D. Martinez and Mookie Betts.

Everyone knows that the tale of this Red Sox season won’t be told until the Red Sox prove in the postseason that they can vanquish the defending World Series champion Astros, handle old boss Terry Francona and his Indians and drive a stake through the team that figures to be right there with them again in the end.

Until then, watch as these Red Sox try to capture the imagination of New England with a drive toward the century win mark, get Andrew Benintendi on American League All-Star team (#VoteBenny) and convince Boston fans that they are legit contenders for their fourth World Series title since Bucky “effing” Dent broke everyone’s heart on the first Monday of October in 1978.