The Bruins Must Limit Their Turnovers Heading Into Game 3 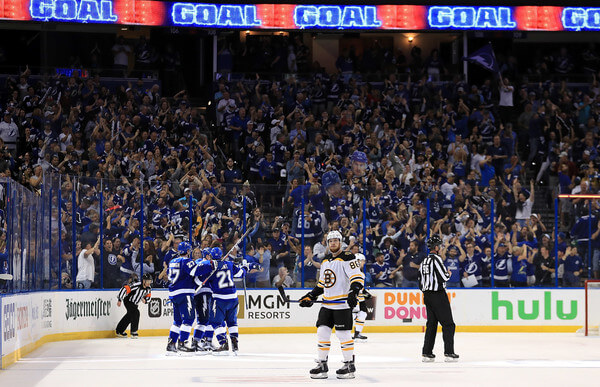 In Post Malone’s new song “Spoil My Night”, the first lines are as follows.

I don’t have much to say, I’ll be out front. Won’t you come spoil my night?

That was the Boston Bruins’ reaction to the rancid officiating in last night’s Game 2 loss to the Tampa Bay Lightning: You can’t say much about it, but it sure spoiled their night.

Poor officiating helped to spoil the Bruins’ night, but that was out of their control. What they really could control were their turnovers and they did not do a good job of that.

“Between the blue lines last night, we weren’t good enough,” said Bruins bench boss Bruce Cassidy. “I think the players understand that. It doesn’t matter what team you’re playing in the NHL. If you don’t manage the puck, eventually you’ll pay the price so I think that’s on us as a group just to be sharper with it.”

Two Lightning goals came off of turnovers in Game 2.

The first major cough up was a drop pass made by David Pastrnak in the offensive zone. The missed pass turned into a two-on-one that saw Tyler Johnson send an average wrist shot over an out-of-position Tuukka Rask.

The second massive mishap was a drop pass made by Marchand just outside of his own blue line that went to Brayden Point, over to Ondrej Palat, and then into the back of the net behind Rask.

A third turnover that is widely overlooked is the one made by Charlie McAvoy in his own zone.

Had Rask not made an incredible save on Nikita Kucherov, that’s the third goal of the game for the Lightning and Boston would be talking of McAvoy’s pass to the other team rather than his nifty first period goal.

All three suspects of these turnovers have one thing in common: they’re some of the Bruins’ most creative players. Marchand and Pastrnak are wizards with the puck up front and McAvoy is highly-regarded as one of the best puck-moving defenseman of his generation.

On the subject of limiting turnovers, Cassidy put it on the players.

“We’re going to address it,” exclaimed Cassidy. “But once the pucks on the players’ stick, that’s on them because we’re not asking them to make 80-foot passes every time. Our structure isn’t so we need guys to be one-on-one all over the ice. We just have to manage it better.

“It’s got to be an individual decision where they say hey, I’ve got to make the right play here. Risk-reward, we talk about it all the time. If you’re going to make a play with a certain level of risk where there could be a turnover, there has to be a reward and usually that means some level of odd-mad rush or scoring chance.”

One thing that Cassidy has succeeded at doing better than the previous administration is letting the young guys like Marchand, Pastrnak and McAvoy be creative. He echoed that in his reasoning to why there can’t be any real adjustments made to prevent turnovers.

“I don’t know that there’s one particular thing that we could do other than try to take away their creativity,” exclaimed the Jack Adams Award finalist. “We’ve tried not to do that all year. Let the players play. But they do have to be mindful of that and be accountable to themselves that they make the appropriate play.”

As the Bruins come home for Game 3, the Ghost of Turnovers Past looms over their head. The series is tied up at one and for their sake, hopefully they’re singing Post Malone’s other new song “Better Now” after tomorrow night’s date with the Lightning, as in their handling of the puck is “Better Now”.

Or else the Lightning will coax the DJ into playing “Spoil My Night” all over again.