There will Never Be Another Kevin Garnett

Celtics fans have been waiting for the next Kevin Garnett since the day he left. There won't be another, and that's why his No. 5 is going to the rafters off one magical season everyone's trying to relive and recreate. 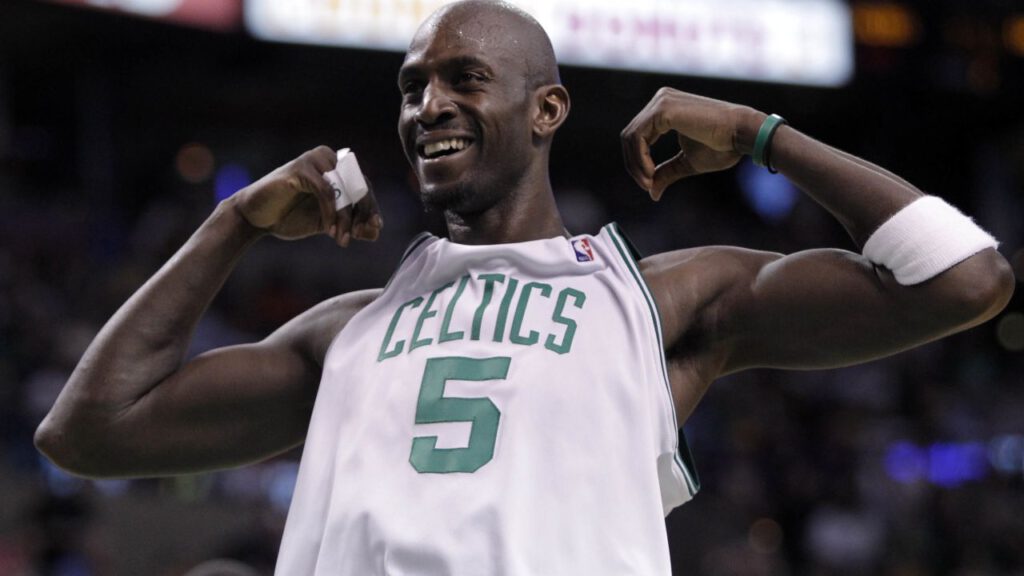 Waiting for an Anthony Davis trade four years ago felt like forcing history to repeat itself. As the Celtics navigated the years after Paul Pierce and Kevin Garnett, they progressed from the lottery to the playoffs and reached the east finals in back-to-back seasons sooner than they were ready for.

The thought of consolidating for Davis seemed worth it for the instant championship credibility, due to the larger-than-life defensive impact and the parallels the Pelicans star’s production had to Garnett’s at that time.

Danny Ainge hoped he could rekindle his signature move too, by finding the next versatile defensive anchor big man with elite scoring upside, a knock-down mid range jumper and passing ability. You can be all those things, and still not be Kevin Garnett.

That proved true for Davis, despite winning a ring like Garnett and joining him among the top-75 NBA players ever. History repeats itself often in sports, Boston had two Big Threes, but one-of-ones exist. Garnett was the one-of-one. Cedric Maxwell called him the best Celtics player ever. Davis rivaled that skillset KG brought on the floor, and some bigs like Nikola Jokic today do far more than Garnett could.

It’s not even the personality. Marcus Smart’s shades of Garnett’s intensity probably stand among the chief reasons Celtics fans drew close to his game following KG’s departure. Garnett anointed Smart’s hustle when they played each other, after all.

It’s the perfection with which Garnett joined Ray Allen and Paul Pierce in Boston and how rapidly their bond turned into banner 17 . That’s something everyone wants to recreate. Maybe due to the regret of that core not winning another ring. Maybe not everyone appreciated every time those three took the floor. Maybe the era ended too fast.

Others, like myself, the same age as Jayson Tatum as I love to remind everyone, began their basketball journeys at about the same time that Garnett transformed the franchise back to its glory days.  I fell in love with basketball in the wake Garnett created, the culture he established, making the uniform, arena and city matter again in the basketball world.

Every season after 2008 brought legitimate dreams of contention. They ultimately weren’t the same after that fateful night in Utah in 2009, when a knee injury left Garnett a different player. The 2010 Finals collapse remains the last sports moment to bring tears to my eyes.

Garnett and Carmelo Anthony’s honey nut cheerio beef baffles everyone to this day. The 2011 squad flashed the eliteness of three prior seasons before the band started to disintegrate with the Kendrick Perkins trade. One last east finals fight in 2012 fell short.

LeBron James ushered out the Big Three era and welcomed Allen to Miami, setting up a bitter feud among the Celtics alumni that’ll hopefully resolve with Allen reportedly planning to attend Garnett’s No. 5 jersey retirement today, after the Celtics host the Mavericks as winners of 23-of-29. Everyone involved, Garnett included wished his time here began earlier and lasted longer. We’re all longing for another 2008.

“My only regret in any of this is that I should have came to Boston a little earlier,” Garnett said upon joining the Basketball Hall of Fame.

There won’t be another, and that’s fine. It took a special player, arriving ready to win, to leave a legacy rivaling most others in franchise history over six years. The next championship will take time. Buyer’s remorse began in Los Angeles already, despite Davis and James bringing the Lakers their own 17th banner. Now, their aging core and injuries share parallels to Garnett and company’s, though more pronounced, as a youth movement takes over Boston with Tatum planting the seeds toward what could become the one of the best career in Celtics history.

Tatum does things that Pierce, Garnett and Allen will look on, acknowledging they could never do. Of course, Garnett’s long reach spans both back to his formative years alongside Pierce on an AAU trip, all the way through their shared decision to accept a trade to the Brooklyn Nets that sent back significant draft capitol back to Boston. Including the two picks that became Jaylen Brown and Tatum. His influence spans beyond six years.

Garnett and Pierce’s relationship began in 1994 with a hilarious taxi fare-skipping story in Las Vegas. They’d reunite as full-grown adults having experienced so much, Garnett a high school arrest that nearly derailed his basketball career, while Pierce nearly died in night club stabbing. The paths leading them to join forces made sense in retrospect. Pierce tried to recruit Garnett to play with him in California, before KG decided to move to Chicago following the expunging of the charges against him in his native South Carolina.

It’s hard to imagine 2007, when the Celtics ramped up efforts to acquire Garnett in the aftermath of lottery disappointment. Boston could’ve easily selected Greg Oden and continued to play in purgatory to this day. Kevin Durant could’ve landed here, and it’s telling how rarely that what-if gets discussed. Pierce could’ve been traded, transforming his Celtics legacy, and who knows if Durant would’ve won it all. He didn’t in Oklahoma.

Even with how history played out, Garnett proved difficult to pull from his only NBA home straight out of high school in Minnesota. Some in Boston, like the late Tommy Heinsohn, infamously questioned whether giving up Al Jefferson for the big man would be worth it. Then, everyone saw KG in green.

The chalk that flew across the scorer’s table. The finger splints from playing through various injuries. The screaming and talking to himself, chest-pounding and reach that seemed to rise up to the rafters. With how bulletproof his legacy now stands, and how inevitable that 2008 championship seems on tape, it’s even harder to picture criticism he faced in his career. For being too skinny. For launching too many jump shots. For not winning.

All of those questions in Boston dwindled early, despite bumps like a seven-game series against the Hawks in round one, and disappeared entirely once the Celtics won Game 6 by 40 points and Garnett tore into his now-legendary post game celebration. Everyone wanted more, especially someone like myself who didn’t fully absorb that title run. The wait continues.

The Celtics teams late in the Garnett era that I followed more closely took on underdog status. The lockout season gave a new-looking cast a breath of fresh air to be able to surge through the Hawks, then win an exhilarating second-round series against the 76ers that I loved to see in Uncut Gems. Boston took a 3-2 lead over Miami before the biggest James-inflicted gut punch yet. Every year at that point ended with the questions of whether or not the core would return. Allen ultimately didn’t, and a strange, injury-plagued 2012-13 season concluded nearly coming back down 0-3 against the Knicks in the first round.

Garnett and company’s last stand, pushing a 20-0 run in front of a Garden crowd that sounded capable of bursting TV speakers, remains one of my favorite Celtics games ever. That sound only rivaled by the roars when he returned in 2014, awkwardly donning a Nets uniform alongside Pierce and Jason Terry in one of the worst games and best tributes you’ll ever see.

You could see the finality of that effort when Doc Rivers, Pierce and Garnett embraced after that Knicks game, and what Jeff Green, Avery Bradley and Brandon Bass would carry forward from playing alongside Garnett to the hard-playing rebuilding Celtics for two seasons after.

Garnett’s words from Game 6 in 2008 still seem to echo through TD Garden, due to how often they’re repeated. How can any act follow-up the theater he produced in that building? The credibility that he gave the house next door to all that history inside Boston Garden where losing mostly resided before him. Everything points back to KG and his energy. The jungle, still inspired by the screaming montages of Pierce and Garnett that played on the jumbotron. The nine teams trying to figure out how to get back to where KG

Everyone wishes the sideline could react to Gino Time like he once did. Everyone hopes the Celtics play like his once did. Everyone hopes he’ll one day work with some current players and sprinkle some of what made him KG on any number of up-and-coming players like Robert Williams III. History isn’t repeating itself, that’s what YouTube is for, and that’s fine.

Good times have continued inside TD Garden, though Garnett’s absence still leaves a void. Seeing Al Horford playing team basketball similar to Garnett’s style in recent years helps, even if he’s the polar opposite in demeanor. Long playoff runs filled the stands again and plenty of talented players have put on Celtics uniform since. Smart’s intensity resembles Garnett’s in a Lite version at 6’4″, as he tries to become the first Celtic to win defensive player of the year since Garnett.

Garnett’s seven feet factored heavily into his intimidation factor and presence though. Part of KG’s appeal was how he could light up the stadium. Hold court in the locker room. Filibuster an interview. Force the attention and respect of teammates upon himself. That, mixed with swears, a keen understanding of the sacrifice needed to win and play alongside other stars, motivational tactics and culture-building all made Garnett that one-of-one.

Looking back on it, Davis would’ve never been all of those things, even if he could provide some of them. Garnett’s career provides an example to enjoy and take in every step Brown and Tatum take. Through their growth, their highs-and-lows and development into the veterans Pierce and Garnett became.

Part of what’s so cool about Sunday’s ceremonies is that these Celtics are forming their own identity, their own championship hopes, and stand in position to give Garnett something special to watch when Tatum and Luka Doncic meet at the peak of their powers. Tatum probably would’ve went to New Orleans in a hypothetical Davis deal. For what? There’s no longer a need to find the next Garnett. The next thing is here.

“Credit to (Garnett) for this weekend and all the festivities,” Ime Udoka said on Friday. “Some are not suitable for here, but I got plenty of stories and that competitive side is what stands out the most. That’s something I’m all about and want to instill in this team.”