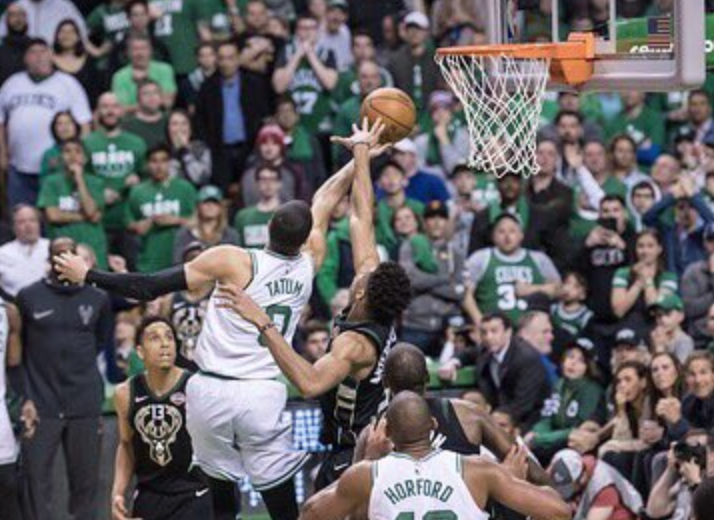 Anyone following the Celtics all season knows this but on Sunday, those paying attention to an epic Game 1 between the Celtics and Bucks got a taste of exactly what makes him a special talent at the age of 20.

Yes, he will finish behind Ben Simmons and Donovan Mitchell in the NBA Rookie of the Year balloting. But what makes Tatum so special is how cool he is under fire for a kid that spent one year at Duke before entering the NBA.

“Nah I wasn’t nervous, I was excited, but I wasn’t nervous at all,” Tatum said. “It was a lot of fun, I’ve always dreamed of this moment playing in my first playoff game. It helped we were at home and we had our home crowd behind us and we got the first win.”

This is why he had the nickname of Jay Smooth from the day he entered Duke and one year later, Boston, and why Danny Ainge jumped at the chance to take him third overall last June. Ainge and Stevens could see poise in Tatum right from the start and now it’s showing up when the Celtics need it.

“Well I can say we expect it, because he’s shown it all year,” Brad Stevens said after watching Tatum post a double-double in his first playoff experience. “So, you know, it’s one of those things – those guys lived a lot of what the playoffs are about.”

Then Stevens a gentle and subtle rub about what these playoffs are really about – finishing.

“So, the good news is, is they’ve got now a little bit of experience and know how hard it is, know how detailed you have to be to finish a team out, which we weren’t, obviously, at the end of regulation. And hopefully we’re better in that situation as the series goes on. But, it’s hard, it’s hard to win. And that’s what you learn in these games.”

Tatum, like Rozier, started slowly in the game before really warming up. He hit a key three from the top at the end of the third quarter got the crowd roaring and put Boston up, 70-66. He had five turnovers in the game, including two in overtime.

But there were two moments in overtime where Tatum again really proved unaffected by the magnitude of the moment. With 1:40 left and Celtics up 106-105, he chased down a rebound off Al Horford’s missed three. He took it upon himself to drive to the basket for an acrobatic, twisting finger-roll of a layup and a three-point lead.

Tatum drops in the shot at an absolutely ridiculous angle! pic.twitter.com/8tB4glzFLU

Then, after a bad pass and turnover, Tatum immediately redeemed himself with a block of Malcolm Brogdon’s layup with 40 seconds remaining to preserve a 108-106 lead with 27 seconds left.

There was a lot to like about the way Tatum handled Khris Middleton’s physical style on both ends of the court.

“It’s a long game and we understand that and both teams are playing extremely hard so it’s going to go down to the wire. That is what I really learned today, you can’t really take plays off because every possession matters.”