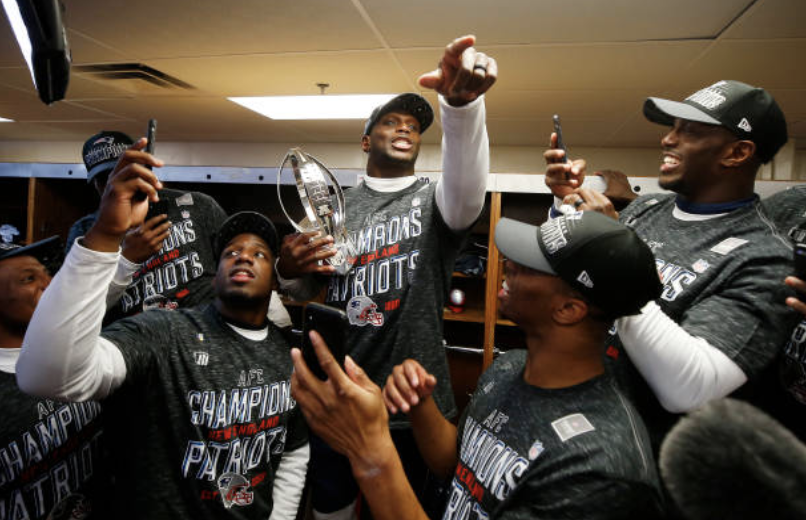 Spend two minutes listening to Patrick Chung and you know what his teammates mean to him.

“Yeah, I love my teammates. I tell them all the time, ‘We’re family.’ I tell them, ‘You play like a family, you win like a family, you lose like a family.’ So, I say it all the time, and if they ever need anything, I’ve got them,” the Patriots 31-year-old safety proudly said Thursday. “And they all know that. I don’t have to come up here and say that – like they know that. So, I’ve developed a lot of friendships and brothers through this process, so it’s definitely some love here.”

That brotherly love is the key of any family that has been through the grueling process of another Super Bowl run. These Patriots have had to overcome more adversity than previous teams that have had joyrides through the regular season and two home playoff games. There was the 1-2 start, with yet again more prognostications that this was finally going to be the end of the Patriots’ run. They were beaten badly by Jacksonville and Detroit in consecutive weeks that planted some serious seeds of doubt in fans and observers.

Tom Brady needed help so the team decided to make a move for the oft-troubled Josh Gordon from Cleveland. Only the Patriots with their tight-knit structure and discipline could welcome a lost soul into their family and try to help Gordon help them. It worked until Week 16 when Gordon had to step away for another violation of the league’s substance abuse policy. This came the week after the Patriots dropped the 17-10 game in Pittsburgh.

But the Patriots, as they do, wished their brother well and went about the business of finishing the regular season strong. They did with wins over the Bills and Jets and low and behold they were the No. 2 seed in the AFC. They pulverized a good Chargers team and found a way to overcome Patrick Mahomes on his home turf in overtime with 70,000 Chiefs fans hoping to celebrate a Super Bowl appearance for the first time in a half century.

There was the expected emotion shown in the Patriots locker room after the AFC championship win in Kansas City. And while it certainly was tempered with a business-like understanding that they’re not done yet as detailed brilliantly here by Bleacher Report’s Tyler Dunne, there was a sense of bond and brotherhood that was also unmistakeable.

How does that family bond translate to what the Patriots have been able to do since dropping the Steelers game and falling to 9-5?

“You’re playing for your family. If someone takes a cheap shot at somebody, we don’t take cheap shots, but you remember it,” Chung said.

Chung had a playful moment with the media Thursday when he spoke to reporters and hoped that those listening to his sermon on brotherhood would do the same in their own families.

“It’s like someone trying to get your brother. If you’ve got a brother or sister, I hope you go fight for them. If not, then you guys suck,” Chung said with a laugh but a purpose. “But, it is what it is.”

Then, of course, there’s the literal case of the McCourty twins, who will be fighting and covering for each other on the field in Super Bowl LIII.

“I’m excited. He’s been a great guy just to see as far as excitement and being ready to go, but when it’s time to lock in, he’s locked in,” Devin said of his brother getting his first shot at glory on Feb. 3. “I think that the guy you see running in the locker room yelling and screaming after the game Sunday and after a lot of our wins this year, when we come in here and we get ready to work, he’s not focused on that. He’s showing leadership of being ready to go, playing multiple positions and we count on him to do that.

“Along with him, Danny Shelton – those guys went from not winning a game last year to now playing the Super Bowl. You can’t make this stuff up. I’m sure they never dreamed of that really or guessed that would happen this year. Those two guys are prime examples of the work we put in for the teammates next to us. We have guys in here that have won Super Bowls, won multiple Super Bowls, but this game’s important because you know you’ve got guys next to you that went 0-16 last year. You know how special this is for them to be in this type of environment.”

That’s great for brothers and sisters but what about husband and wife? And kids?

“That’s why experience really helps,” Devin McCourty said. “Being done with everything logistically, I guess that was Tuesday and coming in here Wednesday it’s like, “Alright, we’re on the Rams” and the scouting report, watching film.”

McCourty is very grateful to his wife Michelle, who is at home taking care of their two young children as he tries to earn his third Super Bowl ring.

“That definitely helps at home with her stepping up and taking even more of a lead than she already has, and that’s what we try to encourage and tell guys. For one, get as much studying and work done while we’re here, do your normal kind of routine, going home, because it gets even harder once we get there and you’re in a hotel now, you’re trying to balance watching film, media and all of that stuff.”

There were a lot of great moments on Sunday, but this might be the best. @McCourtyTwins | #EverythingWeGot pic.twitter.com/f6gNWWhJeT

As for Devin’s twin, he’s still processing playing in the biggest game on the planet with his brother by his side.

“It sunk in when those texts started coming through and everybody was asking for a ticket,” Jason McCourty joked. “They don’t think that you have to pay for them. So I think that’s when it really sunk in, but it means a lot. It’s a blessing. I’m very grateful to have this opportunity and to still be playing football this late in January and heading into February. For me, you realize how special this is and how hard it is to get there. To be there with this group of men, it’s been an unbelievable season.”

A group of men with an incredibly strong bond ready to finish what they started so they can share the memories over a family reunion down the road.