The Jaylen Brown for Kevin Durant Trade Talks Are Over

The Celtics spent roughly one month connected to the Kevin Durant trade demand with Jaylen Brown reportedly offered. It's now over, with Durant staying. 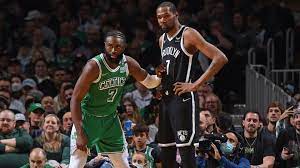 Kevin Durant met with Nets owner Joe Tsai, coach Steve Nash and GM Sean Marks and came to an agreement to return to Brooklyn next season. That means any talks that might’ve gone on about trading Jaylen Brown for Kevin Durant are over.

Bobby Manning talks about what this means for Brooklyn and Boston, who will have to come together to move past any bad feelings the trade rumors might’ve left for Brown. Brad Stevens appeared on the radio on Tuesday to discuss what he considered assessing the price on Durant. As for the Nets, Marks emphasized a focus on basketball as the franchise moves forward toward trying to win a championship.