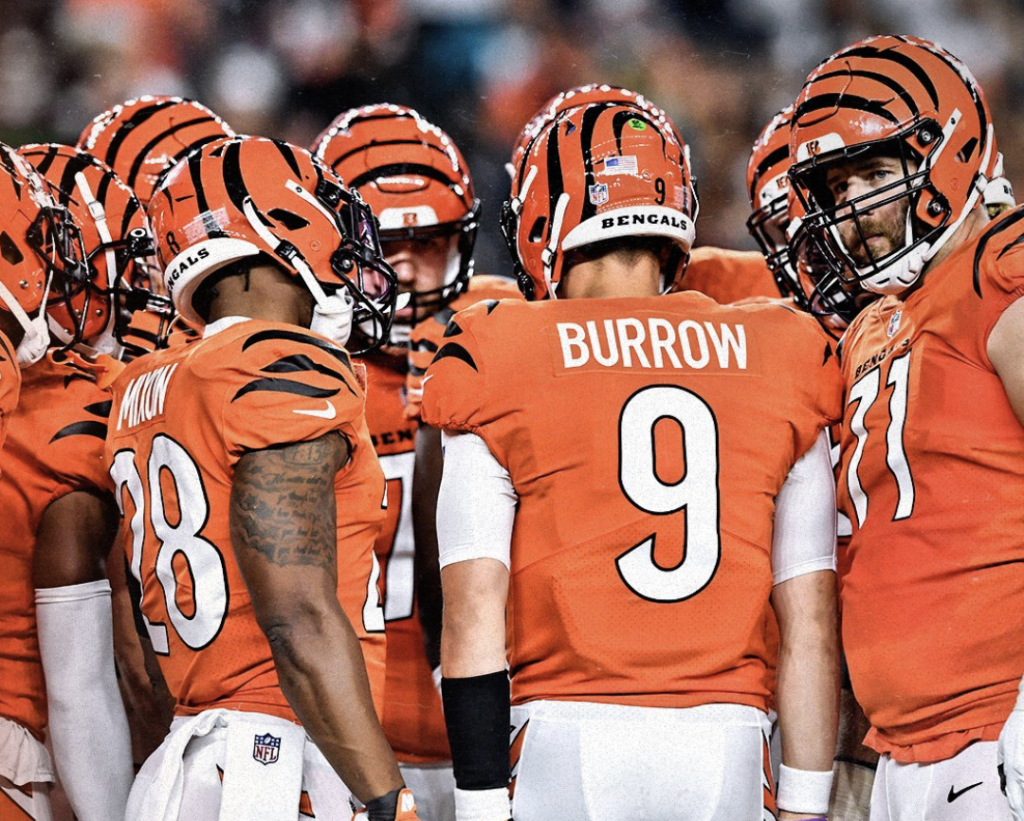 CINCINNATI — It took a near-perfect performance from their franchise quarterback to avoid a disastrous embarrassment on Thursday Night Football and rescue the Bengals Thursday night against the Jacksonville Jaguars.

Any Bengal fan who watched Joe Burrow perform in the second half got a great taste of what fans of Tom Brady or Aaron Rodgers or Patrick Mahomes have enjoyed for years.

The Bengals had a chance as long as their franchise quarterback was on the field “throwing dots” – as tight end C.J. Uzomah put it – in the second half.

Uzomah caught a “flash-screen” and rumbled 25 yards upfield to set up Evan McPherson’s 35-yard game-winning field goal in a 24-21 Bengals win at Paul Brown Stadium. It was screen that Burrow called against an all-out blitz, leaving man coverage on the outside.

“The fans are a big part of this thing,” Burrow told me. “I talked about wanting to put a great product out on the field for them, because we have great fans. We just need to give them something to root for. And I think we’re doing that this year.”

“He is the smartest person out there at all times,” added Uzomah. “I was fortunate enough to get brought into the quarterbacks’ Jeopardy game … The questions, I was like ‘What the hell is this — I don’t know anything!’ and (Burrow) is just like ‘Can I steal this one? Can I steal this one?’ and I was like ‘If you want to — I don’t know the answer!’ He’s just Joey Franchise.”

C.J. Uzomah says of Joe Burrow on final drive "I knew we were going to score" #Bengals pic.twitter.com/DbLOLIaMJ4

Burrow had all the answers at the most critical times Thursday. He was 17-of-20 for 253 yards and two touchdowns in the second half. He finished 25-of-32 yards for 348 yards with a quarterback rating of 132.8. It’s not that Burrow put up great numbers. He did it under the duress of a 14-0 halftime hole against a team that knew he was going to throw the ball to get his team back in the game.

With the game on the line on nearly every play in the final 30 minutes, he had no margin for error. His throw to Ja’Marr Chase was a rainbow of a dime that fell perfectly into the arms of the rookie receiver down the left sideline on the second play of the opening drive. The pass was good for 44 yards and set the tone for the Bengals to rally.

They did, thanks in part to Burrow’s play-action in which he faked a handoff to Joe Mixon and then rolled out to his left and spotted a wide-open Uzomah. The tight end did the rest for a 22-yard score. Four plays, 69 yards in 1:48. It took Burrow just 108 seconds to show that the first half was a bad mirage.

The defense got Burrow the ball back less than two minutes later. Burrow took a different tack this time. He dissected the Jaguars offense, spending six-and-a-half minutes and 12 plays to go 86 yards. On the drive, Burrow completed four of five passes while using the effective run game of Joe Mixon to lead the Bengals to the game-tying touchdown.

It’s ironic that Burrow was facing Trevor Lawrence in this game. Burrow trailed Lawrence’s Clemson Tigers 17-7 in the 2020 National Championship game before rallying LSU to the title, 42-25. This game would prove much more difficult.

Lawrence, the other No. 1 overall pick in Thursday’s showdown, drove the Jaguars for a 21-14 lead when James Robinson scored from three yards out with 14:27 left in the fourth quarter.

Burrow put together another drive, 10 plays for 75 yards, highlighted by his scramble on third-and-2 from Jacksonville’s 31. He found C.J. Uzomah, who had the instinct to follow his quarterback on the scramble. Eventually, Burrow hit Uzomah, and his tight end did the rest for a game-tying 31-yard TD. It was the kind of play winning quarterbacks make under pressure.

But Burrow saved his best for last.

After the Bengals defense came up with their second huge stop of the game, forcing Lawrence to throw deep incomplete on third-and-4 at midfield.

“I knew we were going to score,” Uzomah said. “I didn’t think anything. I went back on the field like ‘Oh, we won. We’re going to score a touchdown or a field goal, but obviously we won this game.’ Especially, how we played in the second half.

“We came out unbelievably slow. That’s not a knock on Jacksonville; they’re a good team — their record isn’t indicative of who they are. But we knew we were shooting ourselves in the foot. We weren’t performing the way that we should have performed and we came in at halftime — first of all, the defense had an incredible stop at the end of the half. To go in 21 to 0 in comparison to 14 to 0 is huge. We all stepped up, said some things in the locker room at halftime and came out and executed.”

The Bengals needed just a field goal to win but they needed to move the ball at least 70 yards to get in reasonable position. Burrow found Tyler Boyd for 12 yards right off the bat. Then Burrow got a huge break from the officials as Tre Herndon was called for defensive holding on third-and-1 at the Cincinnati 31. With Joe Mixon out with an ankle injury, Burrow didn’t hesitate to use his whole offense.

Burrow hit Samaje Perine for 15 yards to the Bengals 46. Then a pass over the middle to Uzomah to the Jaguars 43.

Quinton Spain was called for holding, putting Burrow in a first-and-20 hole from the Bengals 47. Now was not the time to be moving backwards. No problem. Burrow to Tyler Boyd for seven.

All of which led to a critical second-and-13. Burrow needed to read the situation just right, which is precisely what he did. The Jaguars went into a Cover-0 blitz with no safeties and 69 seconds left.

Burrow thought of practice, an outside flash-screen. One difference here, they hadn’t run it with a tight end. That wasn’t going to stop Burrow now. He drilled a strike to Uzomah and Tyler Boyd and the offensive line did the rest, providing the blocking for a 25 yard gain down to the Jacksonville 21 with 21 seconds left.

“I’ll be honest, I had to (do a) double take on that one,” Uzomah said. “Tyler Boyd was looking at me, too, like ‘What did (Burrow) just call?’ It was Cover Zero and we knew going in that (Jaguars defensive coordinator Joe Cullen) was coming in from the Ravens and that’s what they like to do — run Cover Zero in critical situations — and Joey Franchise is just back there dealing dots out there knowing and understanding what the defense is doing.

“He called that play up and just made something happen. Boyd had a huge block on that one, Trenton (Irwin) came out and had a big block. (Burrow) gave me a wink after I caught it and I was like ‘This guy here, he’s reckless!”

The clock management. The call to a screen. The execution of the play. It was all perfect. It was what great quarterbacks do.

“I think I’ve gotten better and better each week,” Burrow said. “Last week, the defense played so well that I didn’t have to do a lot. Tonight, there’s going to be games like that where you have to step up and make plays. I’m really happy with my performance tonight, and I’m going to build on that and keep getting better and better.”

The 35-yard Evan McPherson field goal felt like a mere formality after what Burrow just orchestrated.

Yes, it’s one game, and while Burrow technically led a game-winning drive in overtime against Minnesota in Week 1, he wasn’t down 14-0 at the half and 21-14 in the fourth quarter like he was Thursday.

A franchise is born, and Bengals fans are going to love watching Joey Franchise.