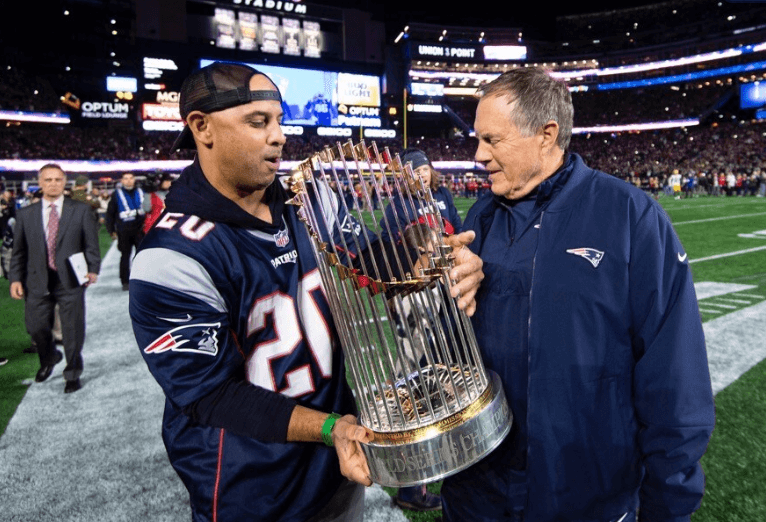 BOSTON — Perhaps the best lesson Bill Belichick can give to other Boston coaches who frequently come to Foxboro looking for his secret ingredient to sustained excellence over the last two decades is how he starts every season.

Clean slate. No matter what happened last year, good or bad, duck boat parade or no, you start each season at ground zero. Of course that’s the case in the standings. But just as important, it needs to be a state of mind.

So, if and when Belichick visits Fort Myers in February or March, Cora would be well advised to take a refresher course. Cora is one of the brightest, most intelligent and forward-thinking minds in baseball. He is no doubt receptive to the ideas of the most accomplished head coach in modern pro sports history. And he certainly was listening last November when the Red Sox and the duckboats visited Gillette Stadium with the 2018 World Series trophy and Belichick on the sidelines.

“I told him, ‘We have to catch up because you know a lot about this back to back stuff. You have to fill me in how we keep the team focused and how can we do this,’” Cora told NBC Sports’ Peter King about his conversation with Belichick. “This is the best of the best. To keep winning the way they do, year after year, is amazing. Somebody leaves, somebody comes in, boom, they keep winning. They don’t care. They do work. They just work. It’s pretty impressive.”

What happened in 2019 with the Red Sox has not been entirely his fault. The breakdowns of Chris Sale and David Price. The inconsistent bullpen early in the season. The inability to produce with runners in scoring position for half the season. These are all factors that are clearly out of his control. Players have to, at some point, produce. He has allowed the top of his order to mesh into one of the best regular lineups in baseball, right there with the Twins and Yankees.

Consider the Red Sox are on the brink of finishing the season with four players with at least 30 homers, an OPS north of .900 and 100 runs scored, a starting catcher with over 20 homers, a rookie fill-in second basemen and a potential 20-game winner. But in baseball, it’s not about the how much but the when. And the clutch in this Red Sox machine (as was in the case in 1977, 1987, 2002, 2006 and 2011) has been misfiring too often.

All of that brings us to what has truly been the downfall of this team and why they are no where close to the Yankees and on the outside looking in on the wild card with less than a month to go.

The starting rotation has fallen off a cliff since hoisting the ninth World Series trophy in club history last October at Dodger Stadium. Sale’s numbers have been very good but untimely homers and a lack of run support early threw his win-loss numbers completely out of whack. David Price has been very good in stretches but not dominant for long enough. Rick Porcello is having a nightmare season and looks completely like a lost cause. Brian Johnson has plugged a few holes in the rotation when needed but it would be hard to believe he’s projected in the 2020 rotation. And Andrew Cashner? Well there’s no sense in beating that horse.

Then there’s Eduardo Rodriguez. He fired seven shutout innings against the most prolific offense in baseball Wednesday night in a 6-2 win over the Twins at Fenway that kept a pulse in the club’s fading playoff hopes. He has, without a doubt, been the ace of this 2019 staff – and it goes beyond the 17-5 record.

“He’s been solid for a while. You go back to where he was in April. There were a few things he cleaned up, and he took off. His preparation has been a lot better, more consistent, more into it,” Cora told me. “Eduardo Rodriguez is a good pitcher. We saw that last year. When he was ready to take off, he got hurt in that play at first base. When he came back, we were kind of set for the playoffs. That’s why he wasn’t part of the rotation. We were very pleased with the way he was throwing the ball and he’s been great this year.”

E-Rod has been the pitcher who has taken the ball every five days and given the Red Sox a chance to win. He leads the staff in wins (17), starts (29) and innings (172.2), with the last two arguably the most valuable on a staff that has had precious few moments of exceptionalism.

Cora’s approach to E-Rod was not like his approach to the others in Fort Myers this past spring, and he admitted as much after Wednesday’s win over Minnesota.

“We knew, stuff wise, he was up there with the other guys,” Cora added. “I do feel, fair or not, I was very hard on him in Spring Training, letting him know this is what we need from him. (His) potential is great. We know that. There’s a lot of people that stay with that and don’t take the next step.”

The fact that Cora verbalized that after one of Rodriguez’s best starts of 2019 should be a bellwether of things to come for Cora and handling the 2020 team. Yes, there’s a little under a month remaining in their title defense and if they put on a miracle run, they can squeak in as a wild card (side note: the Red Sox have never made the postseason in four consecutive seasons).

Cora should take the lesson of being tough on Rodriguez and apply it across the board. That doesn’t mean his decision to lay off the gas on veteran arms like Sale, Porcello and Price was a bad move. On the contrary, it was absolutely the right approach. But this is not about the physical preparation on the field. It’s about a mindset off of it.

Cora needs to be hard on THE ENTIRE ROSTER in spring training next year. Again, baseball players are a different breed, needing to be coddled and managed to stay fresh through the season. And, no, going all Bobby Valentine 2012 isn’t the solution either. But what made Terry Francona exceptional was his communication with the club throughout the season and that started with laying the groundwork in February and March.

The quote that comes to mind is his line from the 2019 Boston Baseball Writers dinner on Jan. 18: “You guys might write this somewhere, I don’t care. If you thought last year was special, wait till this year.” There’s an assumption with those words that the Red Sox have the same players back and they’re going to do things just the same. Well, that doesn’t work in today’s pro sports landscape. Every year, there needs to be a wiping of the slate. All the great ones do this. Belichick, Gregg Popovich with the Spurs, Nick Saban with Alabama, Mike Krzyzewski at Duke, they all build a new mental foundation for all of their teams before the first game is played.

“He took the challenge, made some adjustments, and now he’s doing what he’s doing. That’s not an easy lineup (in Minnesota). Pitching in Coors Field. He’s been great at keeping it simple. There’s not much time to nibble or trick people. It gets to a point in a game where he’s just challenging people with his fastball up and that changeup down in the zone. I’m glad all the hard work he put in in the offseason and the conversations with Dana (LeVangie) is paying off… He’s put in a great season.”

Starting next spring, the Eduardo Rodriguez plan needs to be applied across the board.