The Patriots Revamped Coaching Staff May Be Starting to Take Place

Putting together reports to take a look at New England's new staff. 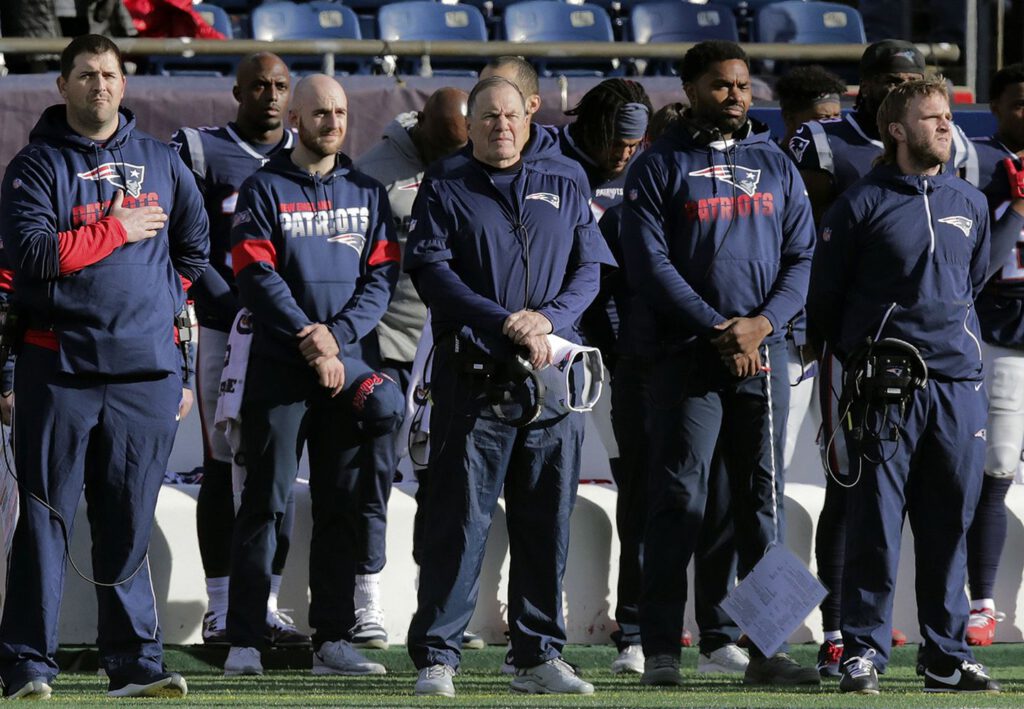 It looks like the Patriots revamped coaching staff is starting to take place, as reports from plenty of Patriots insiders flew off the shelves on MLK Day.

98.5 The Sports Hub’s Scott Zolak and NBC Sports Boston’s Tom Curran each dropped some hints that seem to insinuate a tweaked staff in 2023. Putting their reports together, here’s what we can expect it to look like:

Not that it was much of a question, but Bill Belichick will be returning to the sideline for his 23rd season as head coach of the New England Patriots.

Though he’s been given a long leash in the past – it feels much shorter this offseason, as Tom Curran reported last week that a meeting between Belichick and Robert Kraft happened and that:

“There is no impasse. The Patriots are on to 2023 with Belichick acknowledging 2022 wasn’t ideal and being amenable to changes.

Don’t expect a dog-and-pony show announcing firings or who’s coming in for an interview. Belichick isn’t going to put anyone’s head on a spike for the pleasure of the masses. But my understanding is offensive coaching reassignments are going to happen and several offensive coaches are under consideration for the Patriots’ 2023 staff.”

The team followed this up on Thursday with a release stating that the team will be extending linebackers coach Jerod Mayo to a long-term contract and will begin a search for a new offensive coordinator this week. A clear message from higher-ups, aka Robert Kraft. Let’s take a look at what it means:

Curran followed his report up from last week with some more nuggets on Monday, writing that: “the primary target is former Patriots OC, former Penn State and Texans head coach, former Alabama OC Bill O’Brien. There is unanimity on all sides that O’Brien’s the best person for the job and… the familiarity ownership and Mac Jones have with [him] and [his] willingness to return mean it would be upset if he doesn’t get the job.”

It sounds like the job is all but Billy OB’s – as it should have been a year ago. So what about his staff?

You would think, with a high-energy alpha male guy like O’Brien coming in to essentially head coach the offense, that he would hand-pick his staff. That may not be the case however – at least from the lens of Matt Patricia.

98.5’s Scott Zolak insinuated today that Patricia could move upstairs, but could also have his hands in the mix on helping coach the offensive line. I suppose it could be worse.

Here’s where it gets fun. Jerod Mayo was in line to interview for the Panthers vacant head coaching job last week – until the Patriots swooped in and decided that they wanted to keep him in New England long-term. Mayo wants to be a head coach one day in this league, and it feels like a hand shake agreement that he’ll be the next guy in line once Bill decides to retire.

“You probably have to meet with Bill. You have to talk about all three different units, offense, defense, special team, just in the case of an emergency, because then you become the guy. Here’s the way I like to see things run. Give you a little peek into what we’re doing here, maybe bring you into some personnel meetings, I don’t know. But I don’t think it’s just the title. I think you actually got to put more in charge, you know, as far as you got to see the way you’re going to run all three groups here just in case something would happen to me. You’re the next guy. You’re my hand-picked next guy in charge.”

I’d expect Mayo to get at least one of the above titles heading into 2023.

As much as we’ve all ragged on Steve Belichick and the nepotism in Foxboro, Steve Belichick called New England’s defensive plays this season – and he did a dang good job at it.

The Patriots linebackers have always been above-average, and even after Dont’a Hightower left this season, the unit was solid thanks in part to the coaching of Steve Belichick. He has earned to keep his spot as the LB’s coach.

New England has been a cornerback factory over the last several seasons, and you can thank coach Mike Pellegrino for that.

Pellgrino has been coaching with the Patriots since 2015, and with the corners since 2019 – and he’s done a phenomenal job in the role. The names speak for themselves: Stephon Gilmore, JC Jackson, Jalen Mills, Jonathan Jones, Marcus Jones, Jack Jones, and more.

See above about nepotism. Brian has had the help of a guy like Devin McCourty in the room to help him steer the safety position in the right direction – but I trust him moving forward in this spot. No real changes are necessary no the defensive side of the football.

It sounds like Joe Judge will move from the offensive side of the ball back to special teams.

It only makes sense, right? Judge was once a highly touted, highly sought-after coach in this league – and it was because of the special teams unit he helped run in New England for nearly seven years. It’s the reason he was hired as the head coach of the Giants in 2020. Don’t overthink it. Put him back where he belongs.

In saying this, he’s a high-quality technician of the practice, and is much better suited as a teacher than a logistician. If he’s willing to take a “demotion”, then putting him back as an assistant is a perfect fit for Achord.