The Perfect Patriot Says Goodbye: Why the Patriots Should Find a Way to Keep James Develin Around 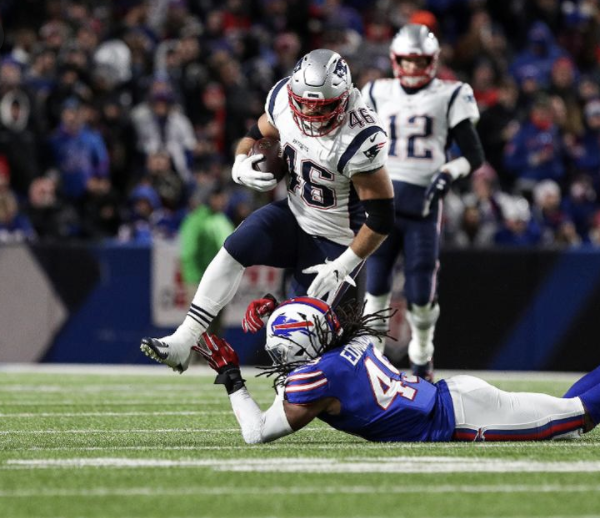 James Develin called it a career this week at the age of only 31. Yet, there wasn’t a single drop of bitterness, resentment or regret from one of the classiest players to ever wear the uniform.

Not that he had a lot of reasons to be upset. After all, he played in four Super Bowls, winning three.

Develin announced his retirement from the Patriots and the NFL on Monday, bringing an end to months of speculation and internal reflection following a serious neck injury that ended the careers of other Patriots like Sebastian Vollmer, Rob Ninkovich and Shane Vereen.

Develin never put up gaudy statistics in his seven-year career in New England, totaling just 222 yards receiving and 26 yards rushing and five touchdowns on 15 carries. But his value to the Patriots locker room, practice field and clutch red zone situations was off the charts. Just ask his head coach.

“To some people, James Develin may be ‘unsung’ in terms of publicity and fame, but to his coaches and teammates he is one of the most appreciated and respected players we have ever had. In football, there are a lot of tough, unselfish and dependable people who bring positive leadership on a daily basis, but the name James Develin represents those qualities at an elite level,” Bill Belichick raved on Monday in a team release.

in 2017, Develin became the first Patriots fullback since Sam Cunningham in 1978 to earn Pro Bowl honors. The 6-foot-3, 255-pounder played his entire college career at Brown as a defensive lineman before converting to offense, beginning his pro career in the Arena Football League and the United Football League.

He entered the NFL with the Bengals practice squad on Nov. 30, 2010, where he spent the remainder of that season and all of 2011. In 2012, Develin went to training camp with Cincinnati and spent the majority of the season on the New England Patriots practice squad. He was signed to the Patriots 53-man roster on Sept. 6, 2013 and proceeded to play 83 regular-season games with 31 starts over seven seasons with New England. He also played in 14 postseason contests with six starts and posted three rushing attempts for 5 yards and five receptions for 29 yards and one touchdown. Develin spent the 2015 season on injured reserve and started two games in 2019 before suffering a season-ending injury.

“A tribute to the impact James had on our success, of the five seasons in which he appeared in every game, we won three championships. Any team would be fortunate to have a James Devlin-‘type’ on its roster but the reality is he is a rarity and we are very fortunate he was a Patriot.”

How did Develin take those words?

“It was incredibly humbling,” Develin said in a video chat Tuesday. “The reason I play this game is not only to provide for my family but for my teammates. I mean, they’re my family away from own family. I have the highest respect for anyone that I’ve ever shared a locker room with, so to see that kind of respect reflected yesterday, it was awesome. It was an emotional day seeing all that stuff and kind of being nostalgic all day and just returning the respects that were given to me. It’s just awesome. It’s really a cool feeling to see the appreciation and love.”

That is all you need to know why Develin should be brought back to the coaching staff, that is if his family is agreeable to such a career transition. We’ve seen it before. Jerod Mayo and Troy Brown have offered their expertise to players because they’ve not only played, they played in the Patriots system for Belichick.

“I think I’d definitely consider it,” Develin told me of any offer that might be coming to coach. “I have this feeling like I need to give back to the game because it gave me so much. I’ve been playing for 25 years and I know a lot about the game, I’ve been through a lot of experiences within the game, so I think that there’s a certain level of knowledge that I have that I can pass on to the next generation of players, wherever that may be. Yeah, it was funny to get that experience at the tail end of my career, to be able to kind of view it from not really being able to perform on the field, but being able to pass along information and have that person that I’m passing it along to perform.”

Just listening to Develin, you understand that he loves what football has provided him and his family and now he just wants to share that passion as a way of saying thanks.

“It was a different type of feeling of pride. It wasn’t like I was personally doing it, but I was helping someone else. Being able to help people in general is always something that I look onto fondly. Being able to do that and also contribute to the game of football, it’s definitely something that I’m considering. But, like I said, I just made this decision finalized yesterday, so I haven’t been able to really pinpoint where I’m going to go, what I’m going to do next. But, it’s something I’d be open to, for sure.”

When Develin was injured in the Week 2 win at Miami, little did we know the 31-year-old fullback out of Brown University, by way of the Arena League and the Cincinnati Bengals would not play another snap in his career. While the Patriots certainly missed Rob Gronkowski this past season, there was no missing the message when Tom Brady suggested Develin’s absence highlighted the fact that he was an irreplaceable player on the roster when considering everything he provided in the locker room and on the field.

It was that kind of praise that not only earned him the respect of his teammates but a place on the team’s All-Decade team of the 2010s released on Wednesday at the fullback position. While he was running “unopposed,” he certainly had to be regarded as one of the more important players on the field when the team needed to convert third-and-short or a key fourth down.

“That’s awesome. That’s awesome. I mean, I guess it’s not too hard to win when you don’t have any competition [at fullback], but it’s an honor, man,” Develin said. “I know the level of play that it takes to perform for the Patriots and to get that kind of recognition, along with some of the guys that I’m sure are on that list. It’s an awesome thing to be able to show my kids down the road here once they can understand what it means.”

Develin probably could’ve been cleared to play in 2020 but very wisely he wasn’t about to take a chance with his neck and spine, not with a beautiful wife and three healthy kids at home to raise. The guy obviously has his priorities straight.

“My injury last year kind of exposed some things that posed a potentially risky situation continuing to play the game of football,” Develin said. “So, that’s really what led to my decision. I just knew that given all of the stuff that we kind of figured out, that it was in my and my family’s best interest to no longer play the game. It was a tough decision, one that took a lot of emotions and a lot of time to kind of talk through with my wife and I, but I’m at solace with the decision that it was made with my family’s best interest in mind.

“I really got the news months ago. I made the final decision (Monday) and kind of made it public, but I had really gone through this process kind of in my own mind with my wife and with my close friends and family quite some time ago. It was before all this coronavirus pandemic really hit, but this does shed a lot of light on really what’s important. We’re all at home with our families right now. When we really think about it, we have a million things going on in life and a million distractions between our phones and our jobs and just everyday life. But, really, when you boil it all down, the only thing we really need is just our family.”

And the Patriots family, given the transition to a bold new era, could certainly use his familiar face and voice around the facility.