Thin Line Forming Between Championship and Bust for These Celtics

The Celtics almost pulled within one win of a championship in Game 4, then their worst tendencies emerged again in the final five minutes. 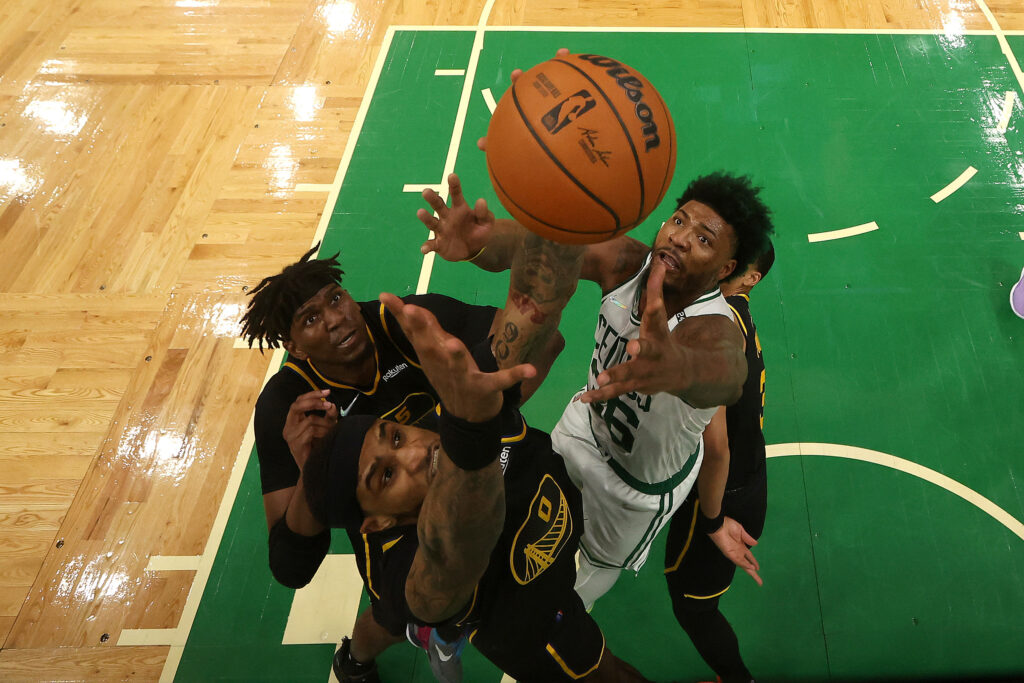 BOSTON — A best-of-three series to cap the NBA Finals will be decided by the thinnest of margins. Both the Celtics and Warriors have averaged 105 points per game, shot nearly the same percentages and matched each other in the turnover and rebounding games. Where Steph Curry has stood out at an all-time level, the Celtics have hit the Warriors with layers of production between Marcus Smart, Jaylen Brown, Derrick White and Al Horford. The narrative swings could sway far wider.

The Celtics didn’t sound overly worried about their 16 turnovers flowing into 43 Curry points, allowing 16 offensive rebounds and seeing their five-point lead with five minutes to flip into a 107-97 loss. They’ve seen these meltdowns regularly on their run, only four games removed from an 11-0 Heat push in Game 7 of the east finals that fell one Jimmy Butler short of eliminating Boston. They’ve won seven straight games following losses this postseason, along with a Game 7 trailing 2-3 against Milwaukee, and know they can bounce back. Though each slip-up risks turning a footnote on a historic turnaround and memorable push through the league’s best for a title into a repudiation, however strong, of this roster’s inability to put its opponents away.

It starts with Jayson Tatum, inefficient and turnover-prone through the playoffs, Ime Udoka prodded him about turnovers, over-penetration and foul hunting while a strange finishing issue emerges for the star. He advocated Tatum going to his floater and mid-range game, searching for subtle adjustments to push his star through the finish line. While Tatum dazzles some nights as a passer, including Game 1 of this series, he’s become caught in-between a scoring and facilitating role, sometimes struggling to balance both as he deferred to Horford and Smart for jump shots on a 2-for-9 drought to close the fourth quarter on Friday.

Udoka succeeded in inspiring massive growth from Tatum as a playmaker, the point of attack on the best passing offense in the NBA Playoffs that entered Game 3 assisting on 70% of its baskets in the Finals. That growth, with a roster that’s composed of players yet to hit their prime will stand, win or lose. The pitfalls to relying on Brown and Tatum for facilitation have reared their head routinely through the postseason too, with Boston often unable to settle itself amid  turnover avalanches — even with Smart and White on the floor. Tatum’s tosses into traffic in the first half were baffling, along with difficult, contested turnarounds he traded with Brown after taking an early lead. As White said well following the Game 6 loss to Miami last round, this team loves to win the hard way.

Part of that is baked into their DNA. Udoka’s Celtics lean defense first more than almost any team, relying on individual efforts on that end and switching, forcing stops and running out in transition. Any slippage offensively that leaks into the team’s defensive effort, namely complaining for calls or driving so deep that you can’t get back, compromise the Celtics’ foundation and can send them spiraling. Like earlier in the season, the crunch time closeout in the half court proved to be Boston’s biggest issue, scoring three points in the final 5:18 in a loss that mirrored a January one against the Hornets at home. Launching jumpers, getting the ball taken out of Tatum’s hands and Brown getting lost in the shuffle after a flaming hot run earlier in the fourth.

It’s good to be ascending, defensively dominant and, for three straight rounds against the league’s best, in control of your own destiny. Boston looks overwhelming for the brunt of its games, opponents scrambling to find lineups that can score on their elite half court defense while not getting targeted at the other end. Steve Kerr has already implemented zones, box-and-ones, benched Draymond Green, used Gary Payton II as a roller, benched Kevon Looney, went back to Looney when the Warriors got lit up on the offensive glass and seen Green as an on-ball defender of Brown fail. He’s used Andre Iguodala after two lost rounds and Nemanja Bjelica in the fourth quarter on Friday. In a 2-2 series, they’re still searching. The Celtics know who they are, even if they have trouble getting there.

Yet that wasn’t the story of Game 4 — a lost opportunity for a team that appeared on the verge of taking full control of the series, moving within an inch of a championship that opened endless opportunities for this core. Kerr’s bold moves paid off, Bjelica stripping Brown in an 86-86 game and the Warriors going on an 11-3 run with Green on the bench. Udoka stacked the floor with a White, Smart, Tatum, Brown and Horford lineup the team hoped would become its best after the trade deadline, but has delivered inconsistent results due to the lack of spacing Brown pointed out post-game. The lack of Grant Williams and Payton Pritchard effectiveness in this series feels reminiscent to how the Celtics struggled to involve Williams and Josh Richardson in crunch time in January.

Those days are far behind them and what Boston developed in their wake have allowed the team to sustain multiple losses that looked poised to stay with the fan base for years into fading memories already. The inconsistency, lack of carryover, obsession with officiating, poor decisions on the ball and inability to fully shake their sloppiest tendencies are part of the story too though.

The Celtics risk making that the story of this team, over Horford’s triumphant return, Grant’s enormous growth, Brown and Tatum finding an offensive connection, Robert Williams emerging as a two-way matchup breaker, White connecting the team some and Smart finding his point guard role, all of which a title would shine a light on. They can only trust their continued ability to bounce back and what they’ve shown is their superiority over Golden State through most of the series, and make their potential fatal flaw as a unit that footnote in history.

“We’ve been here before,” Smart said after Game 3, still seeking more of a role in calming the team. “They’re a really good team, they’re gonna go on runs, but so are we. We just have to hold down and go on our run. If I didn’t stay poised and calm, everything would’ve been a snowball effect for us. I was just trying to control that aspect of the game for me and my teammates.”