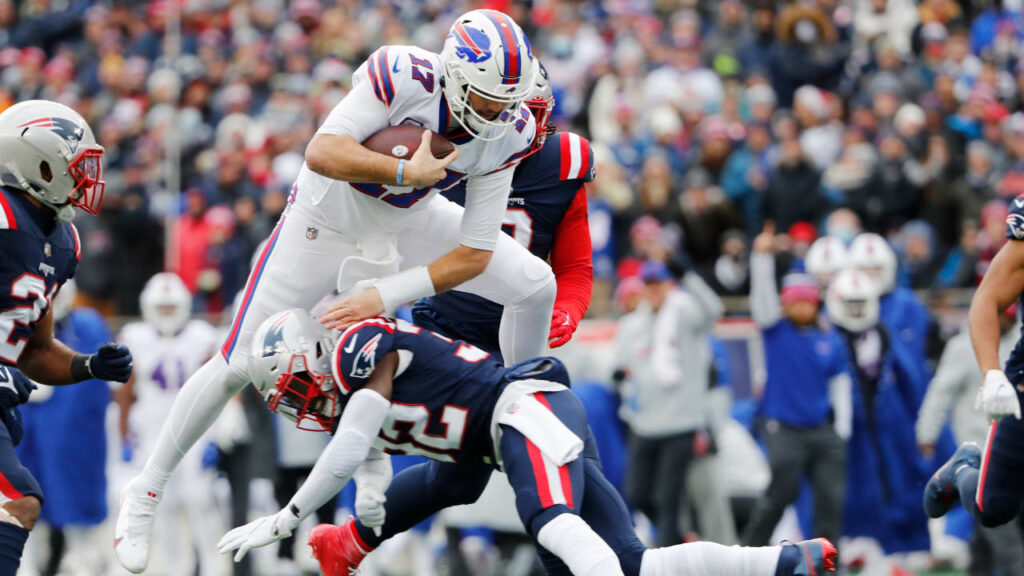 After both teams played on Thanksgiving, the Bills in a win and the Patriots in a loss, the two will now face off for the first time in 2022 this coming Thursday night.

The game will air exclusively on Amazon Prime, with Al Michaels and Kirk Herbstreit on the call. Kickoff is set for 8:20pm.

Here are their odds for Thursday night, thanks to our exclusive wagering partners at BetOnline.ag:

The Patriots are 1-4 against the Bills in their last against five and 1-2 under Mac Jones. The only win? Oh it came in a hurricane where Jones threw the ball just three times. The two losses were by a combined 42 points and a 1:2 TD/INT ratio for Mac.

We’re onto 2022 in New England, however, and the Patriots are 6-5 and just on the outside looking into the AFC Playoff Picture. Jones hasn’t been great, though he’s dealt with some injury, but he played solid ball in the loss to Minnesota last week – showing that they actually have something to work with.

The Bills are 8-3 and are currently in second place in the AFC East behind the Miami Dolphins. They’re just 2-2 after starting the season 6-1 and much like they’ve done throughout the entire Josh Allen era, are currently in a bit of a midseason lull.

As I mentioned above, Jones played sensational football on Thanksgiving against the Vikings. He threw for 382 yards and two touchdowns – and more importantly did not turn the ball over for a third consecutive game, the longest such streak of his career.

Mac said it himself on Sunday: the Bills are the best defense in the league. Jones could use a high-quality performance against Buffalo to continue and hot streak he’s on after getting some mojo back in Minnesota.

The way New England uses Rhamondre Stevenson is going to make or break how the offense runs. Buffalo struggles defending against pass-catching backs, and Stevenson has broken out as a receiver in 2022 leading the team in receptions and showing off his versatility in open space.

He’ll also need to carry the load as a runner with Damien Harris likely out due to injury. Both the Bills and the Patriots are hurting up front, so the run game will truly be all up to Rhamondre. Thursday is his biggest test of the season.

Buffalo wide receiver Stefon Diggs has owned the Patriots ever since he became a Bill, however it was mostly when matched up against J.C. Jackson, who is now an LA Charger.

New England’s #1 cornerback in Jalen Mills will likely have to guard Diggs – but even if he doesn’t, defending the likes of Gabriel Davis or Isaiah McKenzie with Josh Allen at QB is no tall task.

Speaking of Josh Allen, boy is he a player to watch. Allen throws like Marino, runs like Cam Newton, and wins like Tom Brady (at least against the Patriots).

Josh Allen is 4-1 against them since Tom Brady left New England, and has completed 71% of his passes for 1,241 yards, 13 TD, and 1 INT in that span. as I mentioned above, he’s one of the best quarterbacks in the NFL and one of the best runners in the NFL. Though he hasn’t run much on the Patriots in his career, he’s still nearly impossible to defend.

Milano is fourth on the Bills in tackles, third in pass deflections, and has their lone interception return for a touchdown this season. He’s a force in the middle of Buffalo’s defense and Mac will have to keep a keen eye on him play in and play out.

Taking what we’ve seen over the last five times these two teams have played, there’s just no reason to believe that the Patriots should win this game.

Josh Allen has New England’s number lately. History repeats itself on Thursday night and Buffalo knocks the Patriots back to .500.