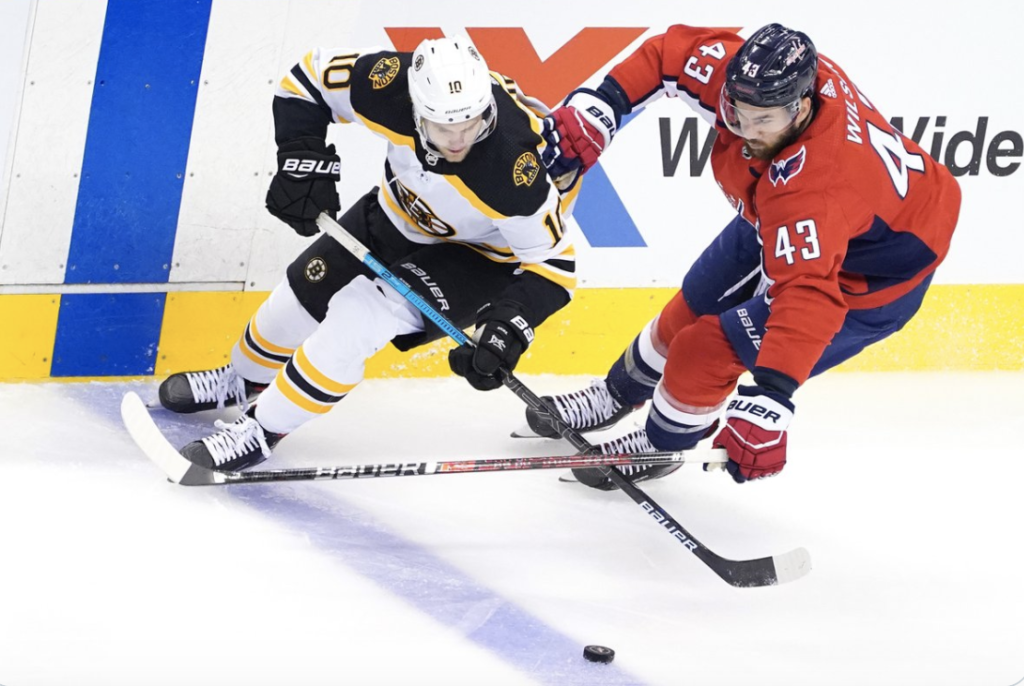 Leave it to laid back Tuukka Rask to put everything in perspective.

The Bruins star goalie, who played against the Lightning and Capitals reassured all Bruins fans that now this silly round robin exercise is over, the Bruins can get on with “real hockey” and finish what they came 60 minutes short of a season ago.

The Bruins lost 2-1 to the Capitals Sunday in Toronto and finished their round robin tourney with exactly zero points. Not a single point after finishing the regular season with 100 points in 70 games. They were outscored 9-4 in three games. They had their moments, like battling back from 2-0 down against Tampa Bay to tie it, only to yield the game-winner in the final two minutes. Ondrej Kase looked pretty good on the David Krejci line for not having played in five months and the Bruins young defensemen look ready to chip into the play and contribute.

“I think these first round-robin games or whatever they were, you just try to shake the rust off and get your team game in a place you want it to be. I think we kind of improved over these three games,” Rask said. “We worked very hard for our goals, just didn’t get rewarded but I think that’s going to come, you find a way. It doesn’t matter what seed you are, you have to beat every team anyways if you want to advance. I think we feel good. It’s over now and we start real hockey.”

Tuukka Rask puts the #NHLBruins 0-3-0 record in round robin in perspective: "It's over now and we start real hockey." pic.twitter.com/Rc3mSaPEtL

Sunday began with some very encouraging signs, as the Bruins outplayed the Capitals for the first 19 minutes, 30 seconds. But the Bruins were not able to close out the first period strong and T.J. Oshie whacked the puck off the stick of Zdeno Chara and past Rask into the Bruins net for a 1-0 Washington advantage.

“We pushed back, certainly. We stayed in the game, clearly generated more offense tonight than we have in other games more consistently,” Bruins coach Bruce Cassidy said. (We) didn’t finish well around the net a lot 5-on-5. Our power play is still work in progress. [David] Krejci’s line looked comfortable, scored a goal obviously. They played well, had their legs, made some plays. Ondrej [Kase] was good on the walls.

“Obviously the two goals we gave up, again, correctable. One we had on our stick and got a little surprised there and the other one, I don’t know. Could Tuukka [Rask] have come out and played it? Only he can decide that, but at the end of the day we were just a little late on the pinch. It’s not like it was a breakdown through the middle of the ice all night like Tampa – not all night like with the Tampa game with the slot coverage. Certainly, Washington is a good offensive team but I thought we were much better on both sides of the puck. We just again, didn’t win.”

After this Tom Wilson goal to make it 2-0, the disgusted look on Bruce Cassidy’s face says, “Well, screw this. Get ready for the Canes.” pic.twitter.com/dqs7bXv6qo

The point is now not to push back but push first.

That’s what the Bruins have to sell themselves on right from the opening puck drop against Carolina in an empty Scotiabank Arena in downtown Toronto.

The Bruins spent exactly zero minutes and zero seconds with the lead in 240 minutes of hockey, including three round robin games over eight days. That is a formula for finding a one-way ticket out of the bubble and back to Boston.

“I think it’s big and obviously it’s not easy playing against a team that scores first, you’re playing against solid squads,” lone Bruins goal scorer Jake DeBrusk told me. “That’s huge to give Tuukka help there too when we get on the board early. We’re usually pretty good with that. It has been four games where we haven’t had it, but I feel like it’ll be a pleasant surprise when we do.”

Can the Bruins beat the Hurricanes? Obviously, yes. They did so last season in a 4-game sweep. But this right now is not the same Bruins team that had a wave of momentum behind them in late May 2019. This is a Bruins team fighting to find its identity.

“We got better defensively against good offensive teams in Tampa and Washington,” Bruce Cassidy said after Sunday’s latest setback. “We tightened up there structurally. I thought we got through the neutral zone well the last few games, better offensively so that’s starting to come. Guys that have been there, obviously those stakes are still in the ground. You look at our top line, they’ve been held off the scoresheet. And I believe that it’s going to be a tough task for Carolina to do that on a consistent basis.”

That is a bold, bold statement from Cassidy which is directed at the Hurricanes group that couldn’t solve the Bruins last year. This could be bulletin board material. Or it could be a way of telling the hockey world he still has loads of confidence in his group. Or both.

Essentially, Cassidy is putting it on Marchand, Pastrnak and Bergeron to wake up and finish what they couldn’t on Sunday when they had great chances, especially in the final five minutes, to tie the game.

“I think that those guys will be able to get their game going,” Cassidy added. “But we’re going to need that primary scoring for one. Maybe some of that will come to life on the power play. I liked our compete (level) today. That’s the other thing. You’re not going to win in the playoffs if you’re not competitive. That part, we’re generally healthy through these four games. Got some guys some much needed work that missed camp. Those are the positives.”

“I haven’t really thought about Carolina yet but it’s definitely nice to go into the playoffs,” David Krejci said. “You start preparing for that team. This round robin, obviously it was kind of like playoff hockey, but it wasn’t the same. It wasn’t best of seven, it’s just not the same, so I’m looking forward to first round.”

Now we get to see if the real Bruins plan on showing up when it matters the most.